New change could include new requirement

As of Feb. 18, the Mason Core Committee has received survey feedback on the proposal for the new structure, thus initiating the start of the process. According to the committee’s timeline, the faculty senate will consider the proposal between March and April with the goal of implementing changes to the Mason Core beginning in the Fall 2023 semester.

“The update to the Mason Core is aligned with our mission of graduating students who are well rounded scholars and engaged citizens who are prepared to act in a diverse global world,” Poms explained during the town hall

According to Poms, the committee sought to apply the original core system within the academic standards that are set by. The Southern Association of Colleges and Schools Commission on Colleges (SACSCOC) and State Council of Higher Education for Virginia (SCHEV).

The Core Committee presented three different models to the community for feedback. Within these models, they suggested changes in several categories and attributes, including:

According to the Mason Core website, Justice and Equity in Diverse Societies (JEDS) aims to teach students about justice, equity, diversity, and inclusion while creating self awareness and reflection on social identities for students. During the Mason Core town hall, Kelley Knight of the Just Society Task said,  “Developing a category of courses for this area is going to create a really unique signature experience for our Mason students.”

The Mason Core Committee seeks to improve the global understanding category with the Global Contexts. “The Mason Core assessment over the past few years demonstrated that the current learning outcomes are not working,” said Courtney Wooten, co-chair of the Global task force during the town hall.

“We revised the catalog description and the student learning outcomes to more specifically pinpoint what students should be learning in relation to globalization.”

Similar to how the committee is updating global understanding with global contexts, the committee is also considering replacing the World History and Western Civilization requirement with a global history requirement. According to Jane Hooper, who is an active member of the Global History Task Force, the goal of this revision is to focus on globalization, interconnections, and interdependencies in history.

According to Usher, the current system has led to confusion on when evaluated courses are submitted by departments to join the Mason Core system.

“They are so similar yet somewhat different that they were hard to evaluate, and people were always confused,” said Poms.

According to Poms, the Mason Core Committee has already approved this change for the 2022-2023 academic year.

In Model 1 on the committee’s proposed changes, JEDS will be represented by the just societies attribute that any two courses in the Core Exploration category can fulfill. The Model 1 proposal also includes replacing the Western Civilization/World History and Global Understanding Requirements with Global History and Global Contexts.

In Model 2, JEDS becomes its own category–Global Contexts becomes a Global Connection attribute that any two courses can fulfill, and Western Civilization/World History is replaced by Global history.

Model 3 also has JEDS as its own category, global history, and global connection requirements. Model 3 also replaces the literature requirement with a broader humanities requirement. 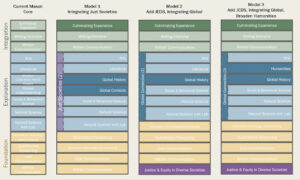 Any approved changes will be implemented in phases over time and will not affect any current students.

According to Usher, the community feedback survey received almost 900 responses, with one-third of the responses being from students.

“Overall they were supportive to a change,” said Poms. “It hasn’t been done in a long time, almost 20 years, and they did feel like it needed to be freshened up.”

According to Usher 75 percent of survey feedback was positive and supportive of the changes.

The committee’s next challenge is finding a way to incorporate feedback in a balanced way.

“Not one of those models is going to be enacted as it is. What will come out is an amalgam that will maximize what people want out of the core,” Usher added.

While the committee received more feedback than they expected there were still many students unaware of the proposed changes.

“Honestly I had no idea changes were being made,” Eileen Toussaint said.

Usher brought up the idea of lessening the amount of credits required by the Mason Core. According to the Mason Core conversations held in 2019 and 2020, 33% of students suggested the Mason Core have fewer requirements.

“An undergraduate degree is always 120 credits,” said Usher. “Part of the misconception some students had is that if we didn’t have a Mason Core they could graduate earlier and the answer is no, everybody, everywhere across the country, every degree is 120 credits.”

“We want to give the best possible education we can to students that reflects Mason’s identity as a really diverse and global university,” said Usher. “The Mason Core is essential and students don’t realize how important it is.”

“We want you to be successful not just now, but in five years and 10 years and 25 years down the line too, that’s the reason for the Mason Core,” Usher said.

FALL FOR THE BOOK PRESENTS WALLS BY L.M. ELLIOTT

PATRIOTS FALL SHORT IN AN OVERTIME BATTLE TO UMASS