BY: NAYOMI SANTOS, SECOND IN COMMAND OF FAUX ESTATE CORRESPONDENTS 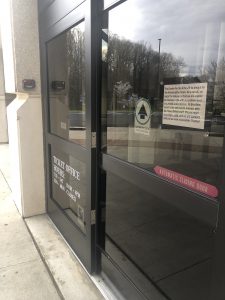 It was an unforgettable night of celebration, music and togetherness. A night in which hundreds of people gathered in one concert hall in Fairfax, Va. to enjoy shared love and belief. This past week, the Center for the Arts hosted a legendary celebrity performance of John Lennon’s “Imagine.”

Despite warnings from the CDC to practice social distancing to prevent the spread of COVID-19, the celebrity cohort put their faith in the song’s powers to protect the hundreds of people in the audience.

The celebrity performers included a powerful tag-team duo of superhero favorite Mark Ruffalo and Broadway star Leslie Odom Jr., who are currently on a much anticipated North American tour. So far, they have graced the stages of Madison Square Garden in Manhattan and the Hollywood Bowl in Los Angeles.

“We wanted to make an appearance on a college campus, which is usually a space for conflict and debate,” said Chad Berkshire IV, the tour manager, in a post-performance talk with the audience. “To remind students that the most important thing is love. That love will heal all illness and inequality in the world.”

Not a single seat was empty to witness big names such as Gal Gadot, Will Farrell and — the event’s headliner — “Fifty Shades of Grey” leading man Jamie Dornan giving the inspiring cover of the timeless Lennon classic.

Far from evening gowns and tuxedos, the celebrities appeared in humble attire. Gadot appeared in a simple burgundy sweater, and Kirstin Wiig at her side sported a stylish wide-brimmed hat.

Ticket prices ranged from $100 to $650 for front-row. No one in the audience seemed to mind that the performance was less than three minutes long. In fact, the standing ovation went on for close to five minutes as each performer on stage gave an extensive bow. The entire event lasted an enthralling 10 minutes and is sure to make Mason history.

“I don’t care that I paid over $150 for a ticket,” said sophomore math major and president of Mason’s Jamie Dornan Fan Club, Chris Huffman. “Just to hear Jamie’s voice and see him in real life was everything to me and my fellow members,” he said.

The club reached out to Dornan’s publicist asking for an appearance at a meeting, but he was too busy on the tour.

The performance also seemed to have a healing impact on the audience.

“I actually had a mild cold at the start of the night and had considered not coming,” said Jessica Harlington, a senior integrative studies major. “Now I feel like I can run a marathon.”

The song is one that preaches love and unity in times of hardship and is a worldwide favorite during times of extreme distress. Researchers have not been able to explain it, but the song has had profound effects, curing all that is wrong in the world.