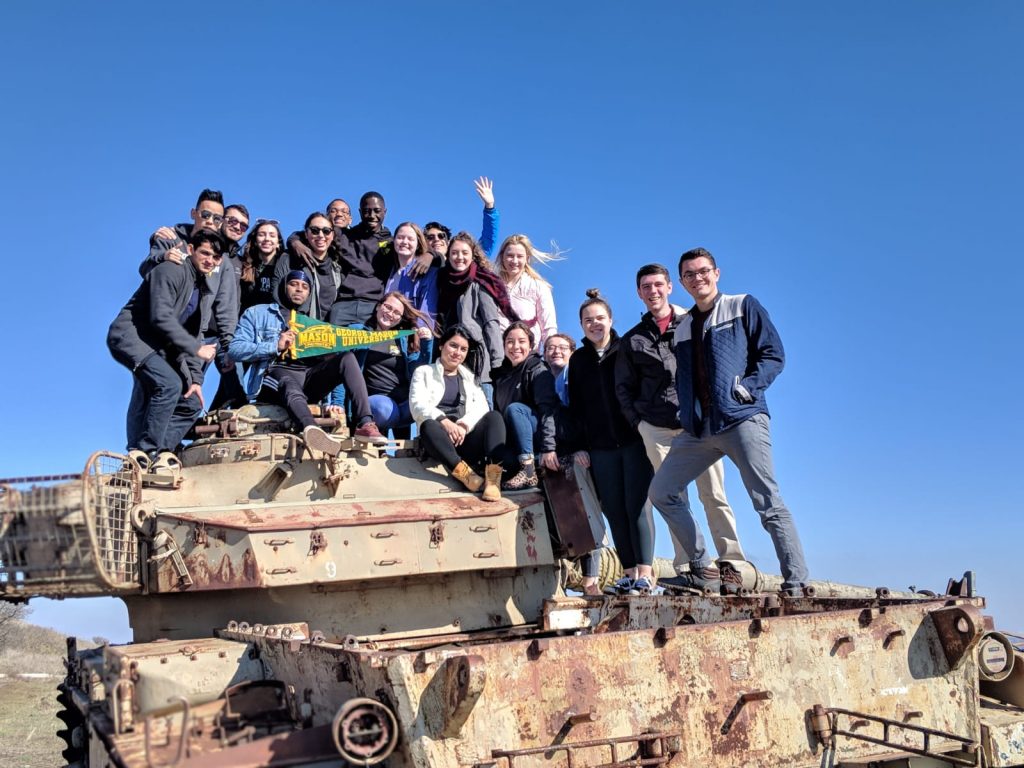 Traveling will open your eyes to both beauty and brokenness. On one small patch of the world, there is a prime example of such a contrast that I had the opportunity to witness firsthand.

I was one of the privileged few to be selected for the Mason Fact Finders trip to Israel and Palestine. Although it happened over winter break, it was by no means a vacation. We still did many fun things, like exploring the markets, visiting famous historical and religious sites, such as the Western Wall and the Church of the Nativity, floating on the Dead Sea and discovering how much easier it is to ride a camel than it is to ride a segway. But the overwhelming majority of our time was spent learning.

We weren’t learning in a classroom. We were learning through experience. It’s one thing to spend countless hours reading articles, books and watching YouTube videos about the Arab-Israeli conflict, but it’s another thing to see it with your own eyes and talk to people whose lives are affected by the conflict.

During one part of the trip, when we visited the border of Gaza, we were listening to a tour guide explain the situation faced by the Gazans inside Gaza and by the Israelis surrounding them. Then suddenly — out of nowhere and with no warning — we heard an earth-shattering BOOM!

I felt my whole chest vibrate. I could see my fellow classmates with wide eyes looking around to see what caused that noise. There was not a stir in the landscape. No mushroom cloud, smoke or dust. Without skipping a beat, the tour guide continued talking as though nothing had happened.

We immediately asked him, “What was that?” He said he had no idea, but he knew we weren’t in danger because the warning sirens didn’t go off. Although I personally suspect it may have been a jet breaking the sound barrier, none of us ever found out what it was, and it didn’t seem to concern our guide one bit.

This was the general demeanor we noticed while in the area. No matter the diversity of opinions we heard, all essentially reflected a longing for peace and at the same time a stoic weariness of conflict. We listened to far more than just Palestinian and Israeli voices, but also Bedouin, Druze, Arabs living in Israel and Christian business owners in Palestine, just to name a few. I must admit, I came on the trip with plenty of biases, and I arrived home with many of those biases, but also with many facts I hadn’t considered and perspectives I didn’t know existed.

The ultimate bottom line that remained unchanged is this: I support human rights. Things such as security, justice for historical ills, civil liberties and religion are all important, but I don’t understand how any of those things can be more important than the lives of innocent people. I do not care if the death comes from the hand of a Palestinian or an Israeli — human life is a precious gift of God, and I want to do everything in my power to conserve it.

As for here on campus, I cannot help but notice the tension on the subject of Israel. Just over a week ago, an act of antisemitism occurred which has received little attention from campus. Someone kicked a Mason Hillel sign while Jewish students were preparing for Shabbat and directed profanity towards those students.

Although there is always room to criticize the government of Israel (as there are many legitimate criticisms), it should never be used as an excuse for antisemitism. Although the Arab-Israeli conflict may seem many miles away, the strife is undeniably felt by both the pro-Palestine and pro-Israel students on campus.

The best path to peace on campus and the conflict as a whole is through honest conversations and dialogue with honest people. By honest people, I mean people who are not so entrenched in their camp they believe they can never be wrong. I mean people who share the vision of preserving peace, rather than “their tribe.”

Of the many uncertainties I became acquainted with during the trip, one certainty I find is if there is to be a peaceful solution it will come with a compromise which will result in some degree of dissatisfaction for both sides. The question is, how much dissatisfaction are both sides willing to tolerate, so that their children may live as peaceful neighbors?