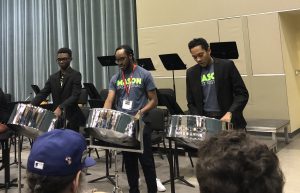 In and around Harris Theater, the Mason school of jazz along with a collection of visiting high school and professional jazz bands, held their annual festival to celebrate the music on Saturday, Feb. 29.

The day-long festival was organized into several different events held around campus, with most performances taking the stage in Harris Theater. Highlights from the event included clinics with Mason faculty, talks from the local jazz community and a concluding performance from the Airmen of Note, the talented Air Force Army band stationed in Anacostia.

In one of the festival’s earliest major events, representing Washington, D.C.’s premier jazz club, Harry Schnipper spent the morning discussing the importance of branding, marketing and how he selects people to perform at his venue. Schnipper is the owner and operator of Blues Alley and also serves as the executive director of a non-profit organization named for the legendary club where jazz giants like Dizzy Gilespie and McCoy Tyner have been featured.

“What do you want to be when you grow up?” he asked the audience. “I ask that question of everybody, regardless of whether or not they’re in the music industry, regardless if they’re 17 or 70. I think it’s important to understand precisely what we want to be when we grow up.”

“The business of music is the little-known secret behind what we do: hiring and retaining quality artists,” he continued.

He spent the rest of his talk offering advice to musicians in the audience, telling personal stories about the club and really letting audience members know what it takes to play at Blues Alley.

At 2 p.m. in the de Laski Performing Arts Building, noted Steel Pannist and faculty member Victor Provost held an informative clinic on improvisation. During his hour-long class, he interacted with the audience, often prompting them to participate if they happened to bring their instruments with them.

“We’re excited to welcome you all to my clinic,” Provost said. “The title: How to learn and improvise on any instrument in 10 minutes or less. Available now on YouTube, Spotify, Apple Music, Vinyl — Y’all can start laughing any time now,” he joked with the audience.

After a short performance, with the members of the Mason Steel Pan ensemble, he launched into a technical workshop designed to give students a clear way to think about improvising in jazz. During the clinic, Provost often called on a few of the audience members to demonstrate some of the exercises he used as teaching material.

Lastly, the concluding event featured the Airmen of Note and the Mason Jazz Ensemble playing an evening concert on the festival’s main stage in Harris Theater.

The Airmen of Note are currently celebrating 70 years of performing in honor of Major Glenn Miller and his 1950s army dance band, and are no strangers to the stage at Mason.

Each performer, in addition to being an active duty service member, displayed a technical mastery of their instrument as they weaved their way in and out of different original tunes on the bandstand. Their music was exciting, adventurous and incredibly demanding, as soloists rapidly flew up and down their instruments at high tempos.

In the highlight of their performance, the Airmen invited Director of Jazz Studies at Mason Darden Purcell, also the festival’s organizer, to perform a number with the group as a vocalist. Purcell formerly toured with the band and, after the tune, they honored her with a commemorative plaque from the Airmen.

Each event gave audience members something different to contemplate and interact with in the world of jazz. Performances and lectures alike prompted conversation, innovation and the preservation of the music.

A Night of Voguing and Style