Mason Players celebrated their members’ hard work by showcasing six of their plays, both online and at a red carpet event. “Originals!” is a yearly event in which Players members work together to create 10-minute plays of any genre, and the members this year did not disappoint.

On Friday, Oct. 8, the organization held an online premiere where they streamed a video of all the plays for audiences to watch from home. Those close to campus were able to attend a red carpet premiere of the same plays in the Johnson Center on Sunday, Oct. 10.

Upon walking into the cinema room, the audience was greeted with string lights hanging from the door frame and square pieces of red fabric imitating a red carpet. Audience members could purchase various items created for the event, such as tote bags, stickers and sweaters. The organization provided a photo booth to add to the feeling of being at a high-class movie premiere, as well as food options for snacking during the show.

Once everyone was seated and the lights turned down, the show began.

When watching the plays, it was clear how much work was put into them. Each play had its own tale to tell and did so in unique ways. Stories ranged from the tale of two estranged friends meeting for possibly the last time, to how a boy who refuses to change became a werewolf.

In the play “Barrier,” written by Jarrod Clark and directed by Skylar Fitzgerald, actor Martin Desjardins really shined in his performance as Lucien, a dying man trying to give his friend his rib. He was able to hit both funny and serious tones, one right after another, and still have it feel fluid.

“Someone Has to Leave First,” written by Jessica Singley and directed by Paisley Lobue, is a hair-raiser. Kept in a room with only one message — “someone has to leave first” — the characters struggle to decide who it should be. The performances made a great contrast to the very calming song that was played over extremely intense scenes.

Written by Bella Panciocco and directed by Martin Bernier, “The Moon is Changing and So Are We,” was a personal favorite. The play captured the feeling of the world around you changing while you refuse to change, while managing to keep a light tone with fourth-wall-breaking comedy. While it did run a tad over the traditional 10-minute time limit, the characters make up for it, most notably Hansin Arvind as Damian.

“Isolationism,” written and directed by Jeremy Pritchard, did an amazing job with writing two characters that had a great connection — and ended on a twist you will have to watch to experience.

Watching “Struggling at the Bottom of a Pond,” written by Brooke Kemph and directed by Josiah Arnett, felt like watching a beautiful slam poetry piece. The actress did perfectly in her portrayal of someone stuck in a toxic relationship, making this a very unique piece among the plays presented.

The final play shown was “Yet,” with writing and music choice by Drake Leach and Brandon Morris, directed by Sophia Inserra. This musical piece was a very refreshing play to end the show, with great performances overall in both singing and dancing. The play managed to juggle two stories at the same time, intertwining them at the end for a grand finale.

Even though the red carpet event is over, you can still view all the plays in video form on the CFA’s YouTube channel. 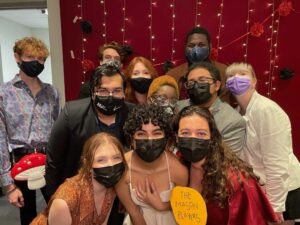