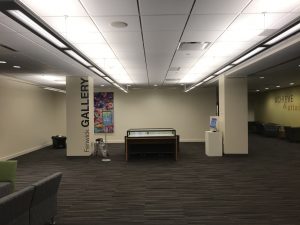 The Fenwick Gallery is often the first thing that students, faculty and visitors see when they walk into Fenwick Library. The exhibit space allows people to explore the art made by Mason students as well as visiting artists.

Stephanie Grimm is the art and art history librarian who manages the Fenwick Gallery. She, alongside her graduate assistant Tanya Dieudonne, works with curators and artists to create the art displayed in the gallery.

“What we try to do is really make deep connections with what is happening here at George Mason,” Grimm said.

The gallery used to be in the hallway that connects Fenwick Library with the MIX. When the renovated Fenwick Library opened, the gallery was moved to the space it inhabits today. The gallery also emphasizes the use of community resources to create the exhibits.

“It’s not unusual for libraries to have exhibition spaces, but I think what Fenwick [is] doing [is] bringing in things from the community, [which] is a little less common to find,” Grimm said.

One of the past exhibits, “Our Comics, Ourselves: Identity, Expression and Representation in Comic Art,” was shown in 2017. It prompted many questions and discoveries about comic book art and what it means.

“That was really great because, for many people, that expands what their conception of this media is,” Grimm said. “What the comic can be about and what it can do.”

“I wanted to see what it means to bring an artist into a library as a space for creative work,” Grimm said.

The artist that Fenwick Gallery invited to conduct research and expand their work was Adriana Monsalve, a photo book maker and the co-founder of Homie House Press. She wanted to expand on a project she had done in the past related to looking at people with albinism in Puerto Rico, with the purpose of exploring issues of both personal and broader identity.

During her stay, Monsalve conducted research in the library’s collections, expanding her project to include the Melungeon communities in Appalachia. In addition to the stacks, she had the opportunity to pull knowledge from the faculty in the Folklore Studies Department.

Along with her research, Monsalve also conducted class visitations and a workshop. The workshop called for students to explore what the meaning of home is and isn’t. By the end, the students’ work was printed into an unbound book that Monsalve exhibited at the Tate Modern in London.

“This Mason book made its official debut at this prestigious art book fair,” Grimm said.

Grim continued, “The byline of the Fenwick Gallery is ‘Space for Inquiry,’ so it’s about asking questions. But it’s also about trying things that might not always succeed but gives you an opportunity to explore that.”

The gallery allows students who may have never been exhibited before to premiere their work, and learn from the experience without the pressures that may come from other art galleries.

Grimm also hopes to see art that explores various different disciplines — for example, the annual “Call & Response” exhibit, where a visual artist and a writer are paired up to create collaborative work.