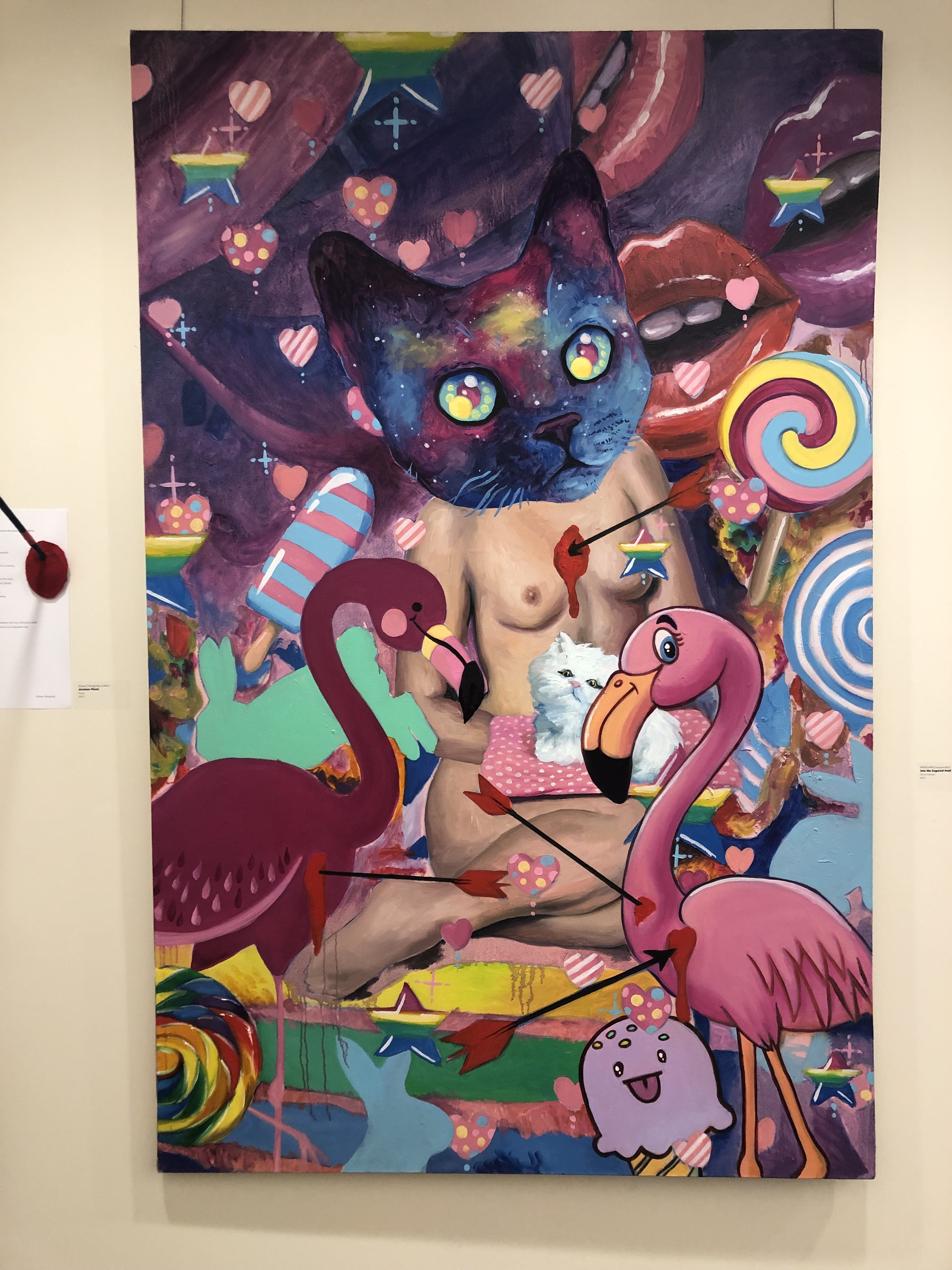 Annual “Call & Response” exhibit is hosted by the Fenwick Gallery

Every year the Fenwick Gallery is the site for a unique exhibit titled “Call & Response,” in which collaborations between pairs of visual artists and writers at Mason are highlighted. This year’s theme is “Transmogrify.”

As the name suggests, the project requires one side of the partnership to call and the other to respond. The curators of this year’s show were Heather Green, professor in InterArts at the Mason School of Art, and Christopher Kardambikis, director of printmaking at Mason.

Both curators collaborated to produce the finished gallery. “It was really nice to be more involved in the production of it,” said Kardambikis. “Working with Heather, working together on this was the main draw for me.”

For this show, Green invited the poets and Kardambikis the artists to participate. They then decided which pairs of artists and poets would work best.

“It was not just pairing a writer and artist,” said Kardambikis. “It was both of us talking about the people’s practices that we’re familiar with and trying to find some way to make connections between the two bodies of work.”

The collaborations proved to be very inventive. For instance, one of the pairs, Emily Fussner (caller) and Lloyd Wallace (responder), altered an already established piece.

“Her work is untitled and then he wrote a poem responding to that painting,” Green said. “And she ended up taking a line from his poem and making it the title of her painting. It created this interesting feedback loop.”

Another example of an interesting collaboration was that of Shane Chergosky (caller) and ANDiLAND (responder).

She incorporated her teaching of ekphrastic works — writing that responds to visual artwork — as well as translation into sculpting the theme for the show.

“The best kind of work to me, where poetry responds to visual art, it takes what the spark of that painting and then creates something totally new that maybe doesn’t even reference fully the imagery,” Green said. “So, I was picturing that word ‘transmogrify’ as kind of describing that experience of the combination of changing but also translating.”

Green continued, “I was so blown away by the writing and visual art that came out of it. I was really impressed with how even people’s work that was really different found a way to connect.”

Most of the artists suggested books they used to expand on their art, resulting in a mini-library residing in the gallery itself.

Both curators worked collaboratively, as the artists had, to produce the finished gallery. “It was really nice to be more involved in the production of it,” Kardambikis said. “Working with Heather, working together on this was the main draw for me.”

“I hope that anything that comes further from this is from the students involved in it. There’s always things that we can do with Call & Response,” Kardambikis said, “but I am more interested to see where the participants take it next.”

The gallery will run until Nov. 9.

Kulture Night: A Night of Appreciation and Expression