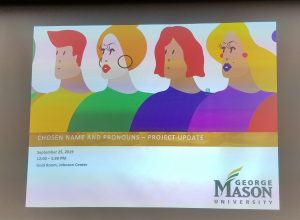 In an effort to further the goal of inclusive community Mason hopes to foster, Josh Kinchen, associate director for LGBTQ resources, spoke about updates to Mason’s name change policy at a town hall meeting on Sept. 25.

A major implication of such policies at Mason is that they would give transgender and non-binary people the ability to update their names and pronouns in Mason’s online systems to match their chosen names.

“This crazy manual workaround, students had to present themselves in the registrar’s office to let them know that … the chosen name should be appearing on Blackboard and in their class rosters,” said Jeannie Brown Leonard, dean of Student Academic Affairs.

The adaptation of this new policy, besides the change to the name policy, is having it apply to faculty members and not just students. Mason has many students who are transgender or non-binary as well as a diverse staff, so moving the policy to apply to faculty was the logical next step.

Students and faculty will be able to choose from the available pronouns and genders, as well as updating their name.

“It’ll have a drop down list with three sets of available pronouns. So he, she and they. And they’ll also [have] a gender identity option as well … So man, woman and non-binary,” said Kinchen.

Kinchen also expressed the goal of a seamless integration of the chosen name policy into the university system. This would include having one’s chosen name shown on Mason sites such as StarRez, Outlook, Mason360, Handshake and other systems where a student’s name is required. This would require speaking to every department’s tech team, and deciding what is and what isn’t possible in terms of the changes being applied to all platforms.

During the question portion of the meeting, the problem of changing names on Mason ID cards came up. One staff member who had looked into this spoke up and stated that, because the ID is used for voting purposes, a person’s legal name must stay on the front. They then brought up how the school is planning on moving from ID cards to iris scans and using students’ smartphones.

Being that the policy can only be reviewed every three years, the administration wanted to ensure that they were prepared. The timeline shown at the meeting, depicting the start of the revision process, outlined all the steps they plan to take with this policy.

According to Kinchen and the timeline, students should have the chance to go into Patriot Web and update their chosen name as early as November.

The November date will only apply to Patriot Web, as there will be an extended wait for the new policy to take effect on all other platforms.

Leonard told attendees at the town hall meeting that there will be a call or email telling everyone to go in and check their information, and correct it if needed.

The timeline has the plan being fully integrated by 2022.

A One-On-One With President Holton