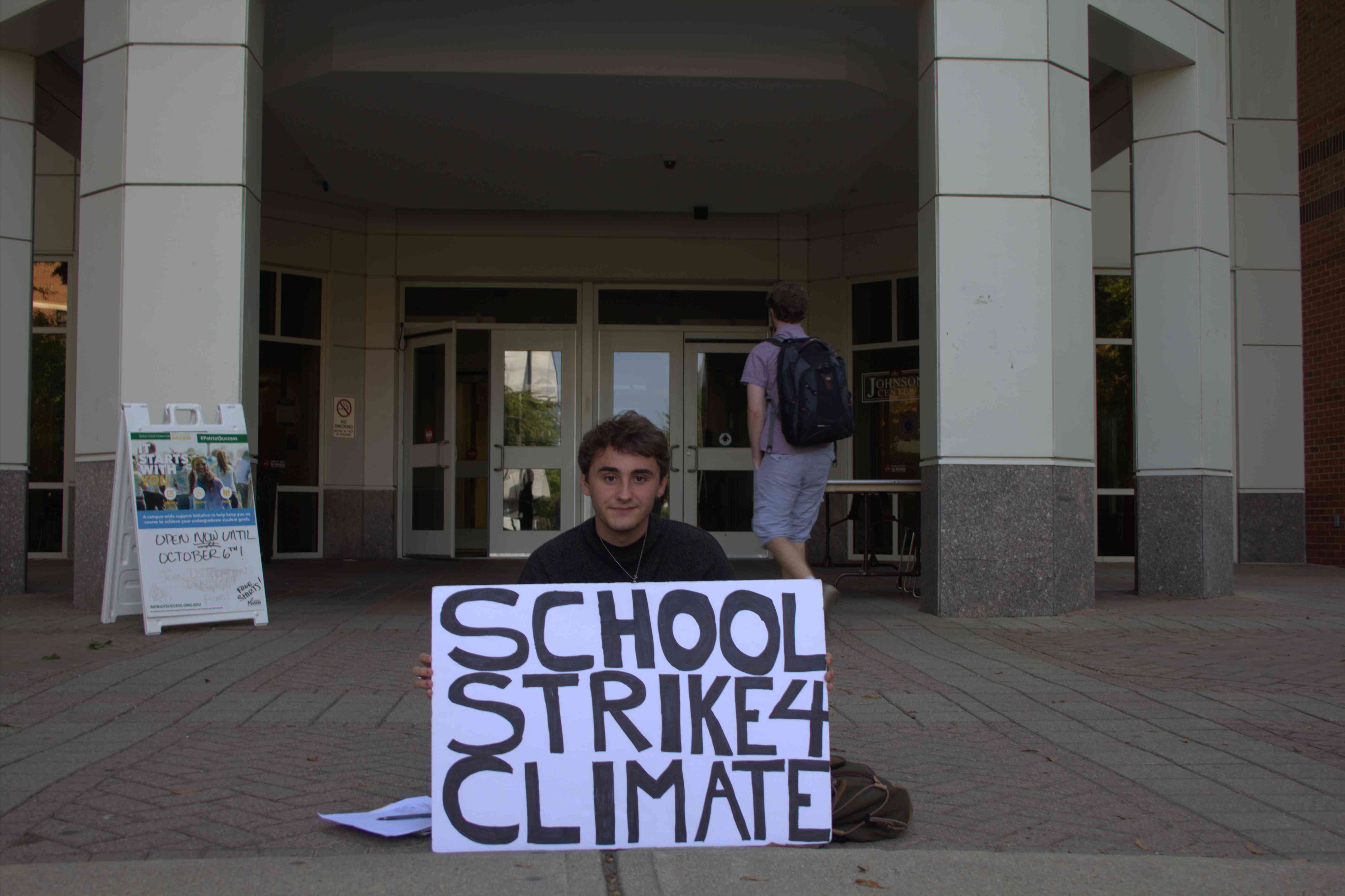 Ethan Wright discusses the importance of the divestment movement

Equipped with a white poster that read “School Strike 4 Climate” and a petition with 84 signatures so far that afternoon, freshman Ethan Wright sat in front of the JC on Friday, Sept. 27 in an effort to urge Mason to divest the $2.03 million they have invested in the energy sector.

This is a regular occurrence for Wright, as he has been striking every Friday he is on campus since classes began this semester.

“I strike from all my classes every Friday,” he said. “Well, sometimes my mom makes me go to my Spanish class,” he added with a laugh. “But I try to stay true to my message.”

Wright explained that he strikes every week for a number of reasons, one of which is to bring awareness to climate change, an issue that he is particularly passionate about.

“With climate change, there is the potential that our futures will be cut short,” he said. “So, by striking I’m saying ‘why should I be in class when there is no future to be had?’”

During the interview, several students approached Wright to talk about his strike.

“So, what are these strikes supposed to be?” one student asked Wright.

“These strikes are one, a statement,” Wright responded. “I’m personally striking to get [the GMU Foundation] to divest $3 million [it] has in the energy sector … and have them reinvest that [money] into sustainable school programs.” (Note: the investment is 2.03 million)

Wright said that he gets questions like those from students frequently, especially about his petition.

“I’ve gotten like 84 signatures today,” he said as he flipped through the pages of his petition.

This petition is another major reason why Wright strikes from his classes every week.

“The divestment movement is really big [across the country],” he explained.

Wright referenced his petition as an addition to the divestment campaign, a recent effort by climate activists to encourage universities across the country to divest money from fossil fuels.

“I think it would be a really good thing if George Mason, you know, the largest public institution in Virginia, would be the lead role model for [the divestment movement] because for so long we’ve taken money from the (sic) Koch Industries,” Wright said.

According to Susan Van Leunen, the vice president and chief financial officer of the GMU Foundation, the $2.03 million that the GMU Foundation has invested in the energy sector is only 1.75 percent of the foundation’s total endowment.

In 2018, fossil fuels made up 80 percent of the U.S.’s energy sources, according to a report from Vox.

Van Leunen wrote in an email to the Fourth Estate that she did not have the exact details about whether the GMU Foundation has investments in the fossil fuel industry.

Wright also expressed that striking is a way to get students to engage in open discussions about the environment.

Wright is deeply involved in the climate movement himself and  explained that he missed classes during the international climate strikes last week, as he was a lead organizer for the movement in Washington D.C.

“[The strikes] were really a defining moment in the climate movement,” Wright said.

Wright, who also serves as the advocacy director of Zero Hour, an organization dedicated to raising awareness about climate change, was also chosen to attend the UN Climate Summit in New York City on Sept. 23, which was also attended by internationally recognized climate activist Greta Thunberg.

Additionally, Wright explained that “climate anxiety” is a reality for a lot of people. He believes that his method is a way to get students to engage in open discussions about the environment without causing that anxiety.

“I definitely have talked to a good amount of people that are just kind of unaware of the urgency but also the intersections of the climate crisis,” Wright explained.

He has these discussions in hopes that this will encourage young people to get involved in climate activism.

Wright addressed that this idea can be overwhelming for people, which is why he believes the use of open discussions is important to educate people on the reality of the climate crisis.

“You know, you do your best and tell the information that you can,” Wright said. “Talking about it is a good way for [young people] to get involved at the community level.”