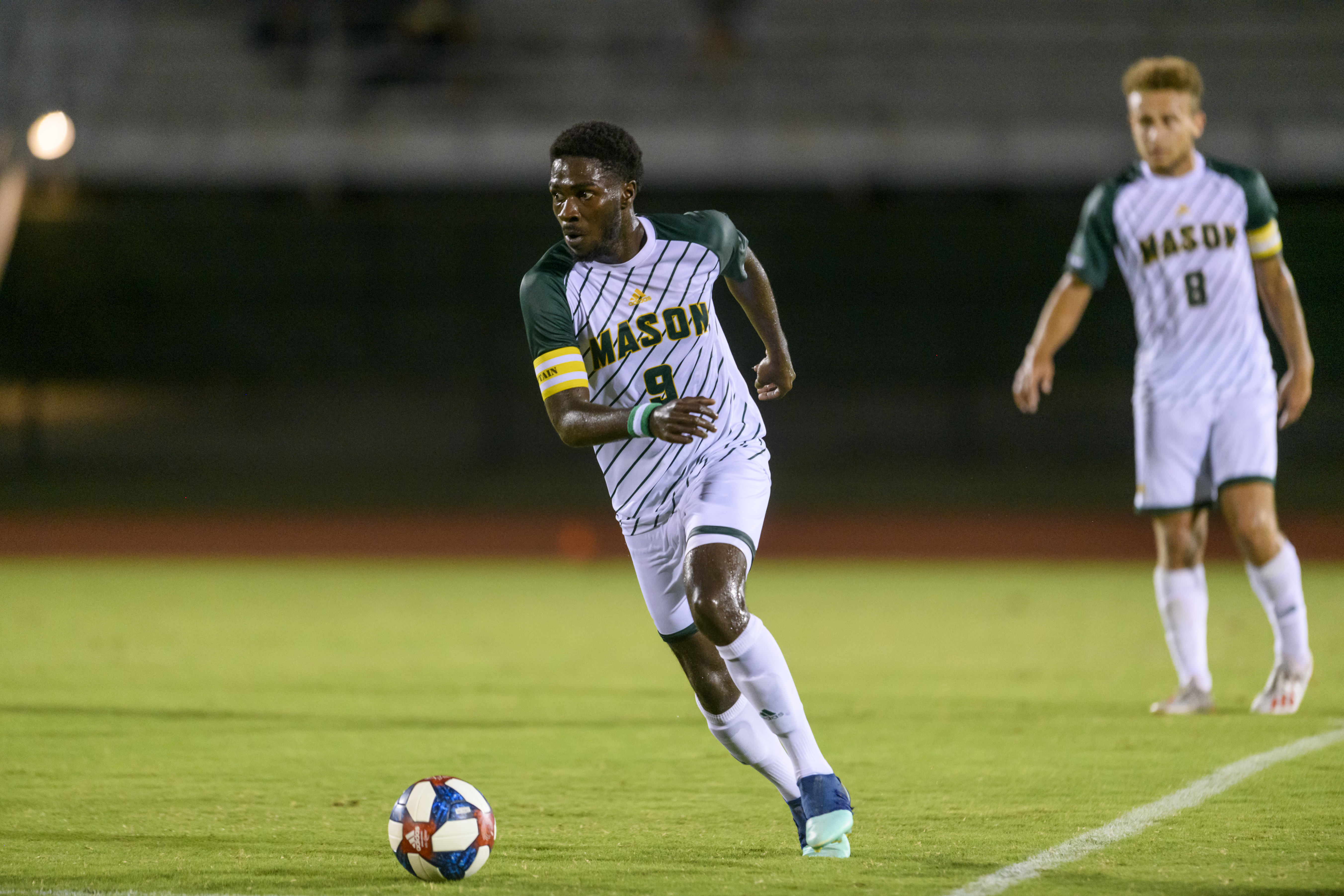 Have you ever wondered what it was like being born into a soccer family? One that lived, breathed and bled soccer?

This is what it was like for Mason men’s soccer player Tunde Akinlosotu.

“I guess ever since I was a kid, we’ve always just watched soccer [and] played soccer. It’s always been a family outing,” he said.

He started playing soccer with his older brothers around the age of 6, growing up in a family where his dad was a soccer player and his mom was a track star.

Despite playing basketball and track when he was younger, Akinlosotu always knew he wanted to play soccer on the collegiate level. “[Ever since I was a kid] and ever since I was in middle school and high school was I always just wanted to be a pro,” Akinlosotu said.

During his high school career, Akinlosotu received many accolades on levels ranging from local to national. He contributed more than 18 goals and more than 15 assists to help McDonough High School win the Maryland Interscholastic Athletic Association A Conference championship.

Akinlosotu was named an all-conference and all-met selection three times. He was also selected as an all-state player in Maryland twice. Akinlosotu was named to the United States Youth Soccer Association National Championship Best XI Team back in 2015.

Then came the time for Akinlosotu to choose where to take his talents to the collegiate level.

Akinlosotu made the decision to come to Mason in 2016 for many reasons, including “the close proximity to D.C. and D.C. United.”

“I also knew that a lot of good things come from the DMV area soccer wise and it’s a growing market,” Akinlosotu said.

He continued, “Then after that, it was basically Grant [Robinson] and Ryan [Mingachos]. I knew them in high school. They both committed I think a week before I did and the class that we had coming in really drew me here. Coach Greg [Andrulis] and our old assistant coach really helped me, showed me the school [and] showed me how they were playing and I liked everything about Mason at that point.”

During his time here at Mason, Akinlosotu has even had the chance to play each of his brothers once. “Playing against them is very different. I remember the first time I played my oldest brother, we tied and then I play[ed] my second oldest brother. We lost 3-0 and that was a bad year.,” he said.

The rivalries between the brothers did, in fact, involve some trash talking between the three of them.

“That was our only game we played I lost 3-0 and I always say I’m better soccer player but he won 3-0,” he said with a laugh.

This brotherly bond did not only bring a sense of competitiveness to their family but also a sense of inspiration for Tunde.

“One of my brothers is going to be a lawyer in a year and another is going to be a doctor in three years so wherever they put the bar out, I would have to eventually surpass them,” said Akinlosotu.

Since the beginning of his freshman year, Akinlosotu has scored 11 goals and 10 assists totaling 32 points. He was tied for first in goals (5) and finished first in assists (5) for Mason during the 2018 season.

Akinlosotu has also learned to instill motivation in others, most importantly his teammates.

Akinlosotu also recalled his favorite memory since he started playing for Mason.

“I’d say definitely the second half of last season [was my favorite memory]. [After] we were 3-6 going into conference [play] and then turning it around. [It was] just how we grew together last half of the season and making it to the [A-10] finals. A heartbreak, but the journey I will never give up or trade it for anything else.”

With the soccer season halfway done, next to come are the A-10 Conference games, and the the A-10 Championship.

That being said, Akinlosotu still has hopes to finish his senior year on a high note.

“Definitely win the A-10’s, that’s the only goal this year. Win the A-10 and make the NCAA Tournament,” he said.

Mason men’s soccer’s next game is Oct. 12 when they take on Davidson for the first time at home since 2016.

A Major Decision in the Mind of an Undecided Student