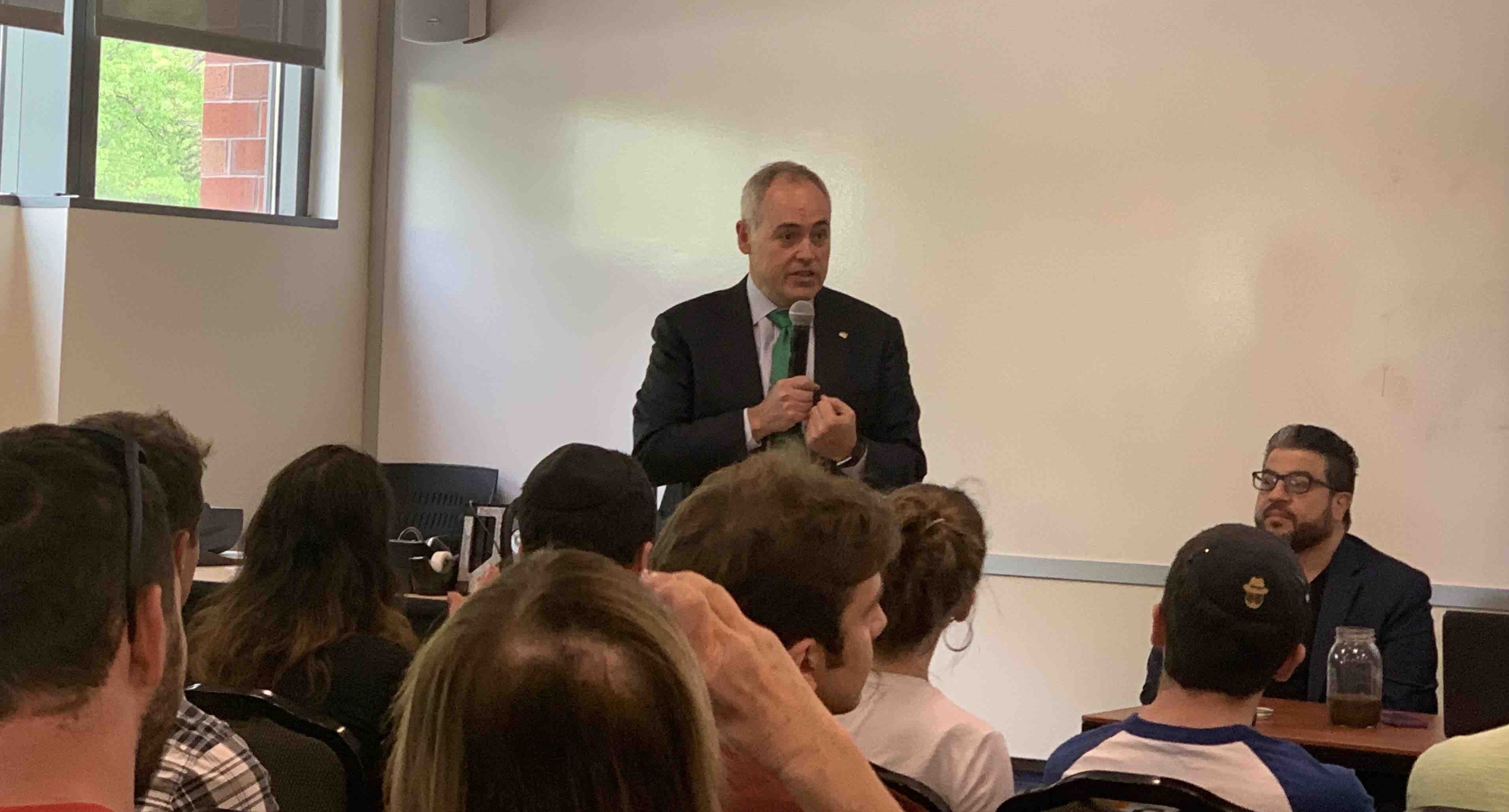 A town hall discussion, “Antisemitism, Islamophobia, and Discrimination in the Name of Religion (Part 2),” took place Thursday, April 25, in Merten Hall, moderated by Director of Middle East and Islamic Studies Bassam Haddad along with Associate Professor and the School for Conflict Analysis and Resolution (S-CAR)’s Director of the Dialogue and Difference Project Patricia Maulden.

Topics of conversation at the town hall included contextualizing the history of anti-Semitism and anti-Judaism, personal experiences with Islamophobia on campus, the importance of community and understanding nuance and power hierarchies.

This was the second town hall that took place on the topic. The first occurred Thursday, Dec. 6, in The Hub.

The aim of the town hall, described by Haddad, was “to weed out as much as possible, by working together, any sort of discrimination that undermines that environment here at George Mason in any way, shape or form.” 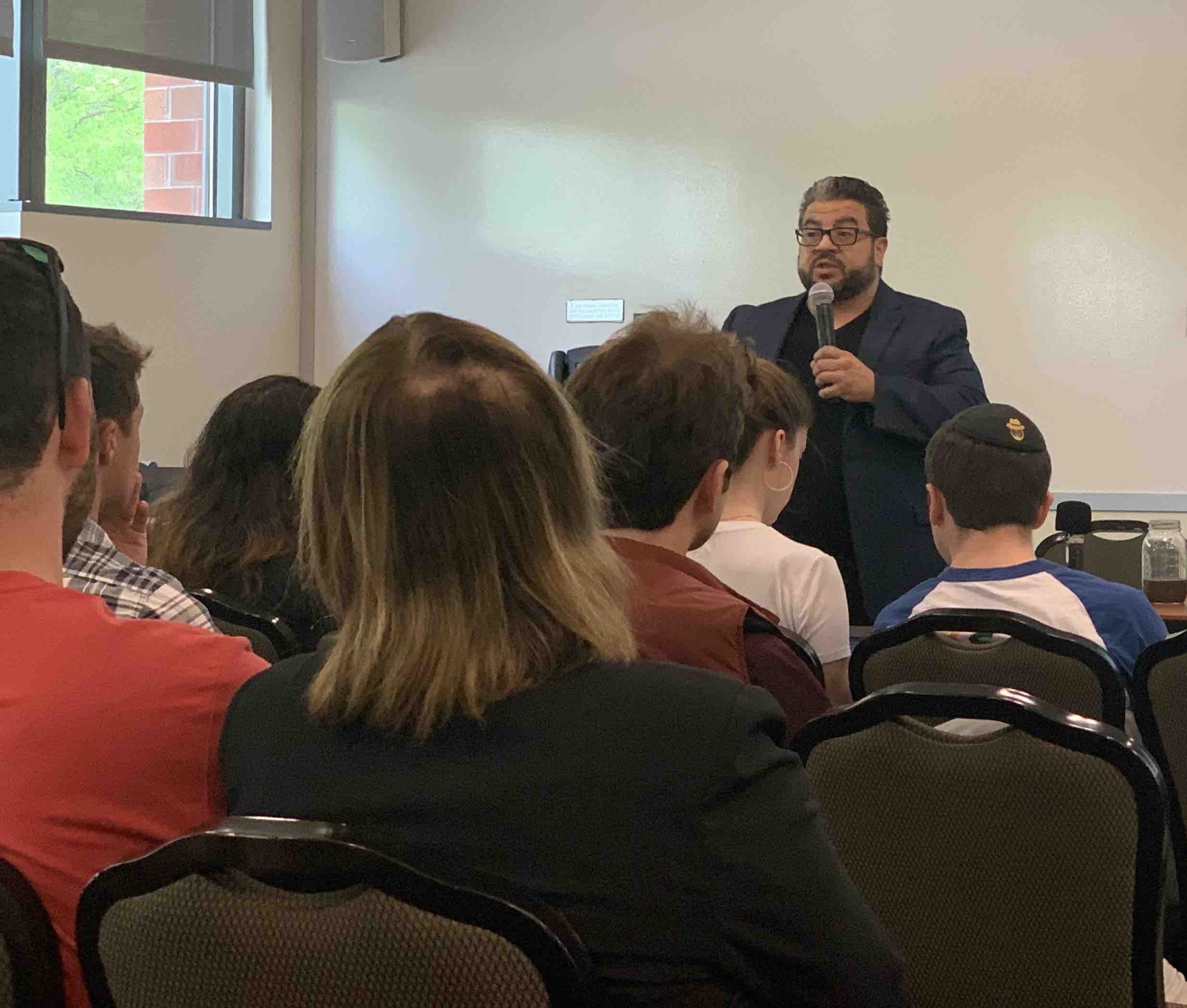 Haddad noted that, when it comes to addressing political issues, accusations of Islamophobia and anti-Semitism have come about.

Mason President Ángel Cabrera made opening remarks before the panel began, thanking everyone who organized the panel and noting the importance of exemplifying dialogue in practice.

Maulden began the panel by noting the importance of a concept called radical listening, the idea of intentionally quieting our internal monologue when someone is speaking.

“It is being present with the person who is speaking, consciously, intently and person-to-person … and suspending judgments, which is hard to do if you have a discussion where you don’t agree,” Maulden said.

Hamdani spoke of her own experience with Islamophobia as a faculty member on campus.

As a professor of Middle East history, she noted that she “describes the Zionist colonization of Palestine, and apparently, one of my students remembered that.” She added, “Subsequently, the tragic synagogue bombing occured in Pittsburgh, and … one of my [Jewish] students was asked by [Fourth Estate] about how he or she felt about being on this campus. And that student recalled to the reporter [at] Fourth Estate that I had sort of articulated anti-Semitic comments in my class. As a result, the newspaper was asking me for my response to this.”

The matter was dropped after the student was unable to recall anything explicitly anti-Semitic.

As a Muslim professor, Hamdani questioned whether, because she discusses the Middle East and Israel, something she might say would be automatically perceived as anti-Semitic. At the time of the incident, she had also recently signed a petition with other colleagues asking Mason to revisit the employment of a faculty member who had expressed anti-Semitism, and she found the entire encounter paradoxical.

Erakat noted the difficulty in “trying to walk this tightrope of being inclusive, tolerant, beautiful, salad-bowl multicultural, [while] at the same time, we actually have an allergy to naming what the problem is and naming power and the way that it is affecting us. So I think that doing that obfuscates the way that we can be victims and perpetrators at the same time.”

El-Hibri, the final panelist to speak, made a closing statement about looking intently to see where these perceptions grow and how there is nothing inevitable about this kind of bigotry.

El-Hibri continued, “Certainly we need to talk about collective models of emancipation, solidarities, which push back against this effectively, but we also need to look back on this very carefully at what kind of ties can be formed [that] can make things like anti-Semitism and anti-Muslim sentiment unimaginable and not ground on which they could crumble.”