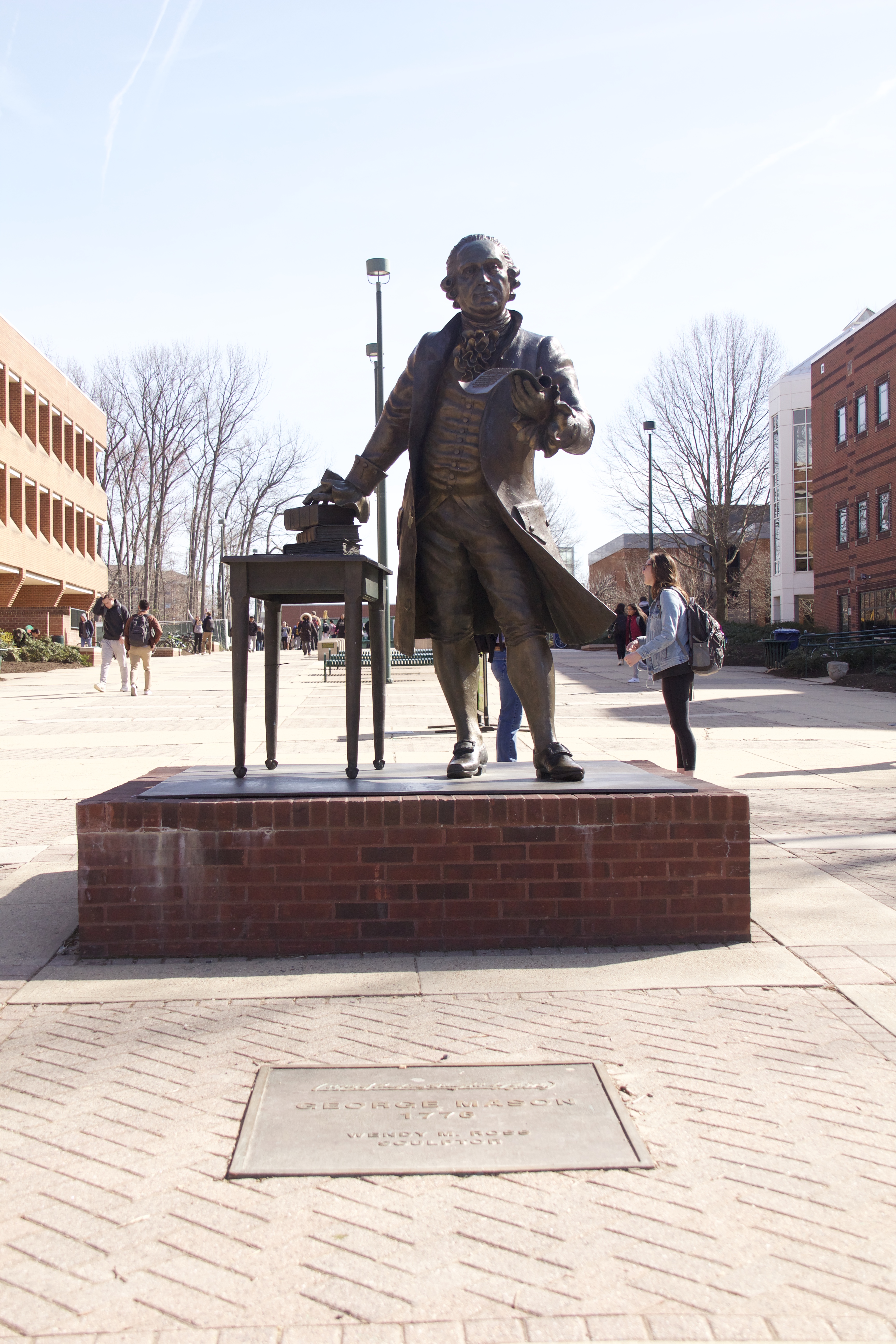 WHAT’S YOUR FAVORITE THING ABOUT MASON?

Obviously, the fact that it is named after me is my favorite thing about GMU. Not a lot of people can say that they have a large public university that carries their name.

WHAT DOES IT FEEL LIKE TO BE STANDING IN THE SAME SPOT FOR ALMOST 23 YEARS NOW?

To be honest, it can be quite boring standing in the same place literally doing nothing for the past 23 years. I mean, it would be really nice to just walk around for a bit and see what the rest of campus looks like. I hear the Mason pond looks really great. But after the first 10 years, you get used to it. Besides, it’s not all that bad.

WHAT DO YOU DO TO PASS THE TIME?

Well, whenever there is an occasion, Mason students come and dress me up, so that’s always entertaining. My favorite is when they dress me up as Santa.

I also love watching new students come to explore Mason for the first time. They are always so excited, and they come and take pictures with me.

YOU’VE PROBABLY HEARD THAT THERE IS A MYTH GOING ON THAT ANYONE WHO STEPS ON YOUR PLAQUE WILL NOT GRADUATE IN FOUR YEARS UNLESS THEY RUB YOUR TOE FOR GOOD LUCK?

It’s absolutely true. Every year I get students who think it’s fake and just shamelessly walk on my plaque, thinking its funny. Well, too bad for them, I say, because in four years they will not be laughing.

AND WHAT ABOUT YOUR LEFT FOOT BEING LUCKY?

Also true. Back in the day I used to have gangrene on my left foot. It hurt like hell. But then one day, the pain stopped and my foot was completely healed.

Now, I don’t know about you, but I haven’t heard of anyone else with a foot that miraculously heals itself, have you? So, you should rub that foot whenever you need some extra luck. Maybe all your problems will miraculously disappear too. 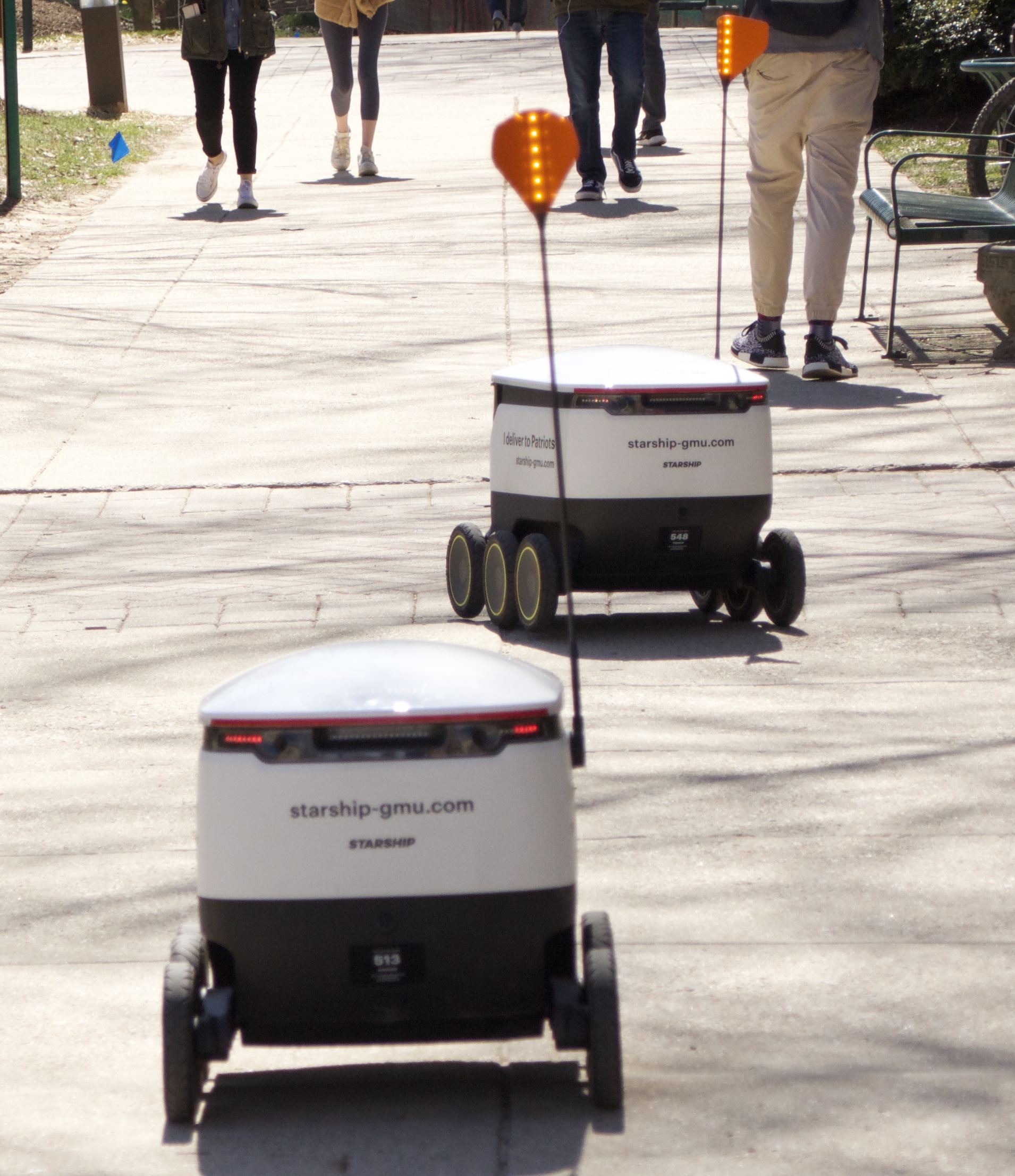 HOW DO YOU FEEL ABOUT BEING THE FIRST ROBOT TO BE USED ON A COLLEGE CAMPUS?

I love it! It’s a chance to have my name, which is Beep by the way, spelled B-E-E-P, written in robot history. I like to think of myself as a trailblazer for all other electronic organisms.

YOU GET TO ROLL AROUND ALL OVER MASON CAMPUS. DID YOU DISCOVER ANY COOL SECRET HIDEOUTS OR SHORTCUTS YOU WOULD LIKE TO SHARE WITH US?

Well, if I did know any of that, I wouldn’t share it with you, because otherwise it won’t be a secret anymore, would it? I would just like to say how inconvenient all this construction work is. I mean, it takes me twice as long now to deliver food to people, and hungry customers are not fun to deal with.

WHAT’S YOUR BIGGEST FEAR IN LIFE?

That someone will come along one day and trap me between four cones. That is probably my greatest fear, because then I would be completely unable to move, and it’s like, ‘Now what?’

OVERALL, WOULD YOU SAY YOUR TIME AT MASON HAS BEEN A SUCCESS?

I absolutely would. Based on the fact that people keep using me all the time, and I mean that in a nice way, I would say that I have been a good addition to campus.

IS THERE SOMETHING YOU WOULD LIKE TO SAY TO MASON STUDENTS?

Yes, I would! You know, when I’m running from one place to another and you see me trying to pass by, DO NOT stand in front of me. I mean it. It is not funny at all; it’s practically bullying. Also, you might think you’re special doing it, but I promise you, you are not the only one doing it, so it isn’t like you came up with a cool, funny new idea.

Also, you keep doing that and getting in my way, then you complain about how long it takes me to get your food! I mean, I work hard all day, every day, for you, rolling around from one end of campus to another, and this is how you repay me? Really??

OKAY, OTHER THAN THAT ANY OTHER COMPLAINTS?

No. It’s been lovely. 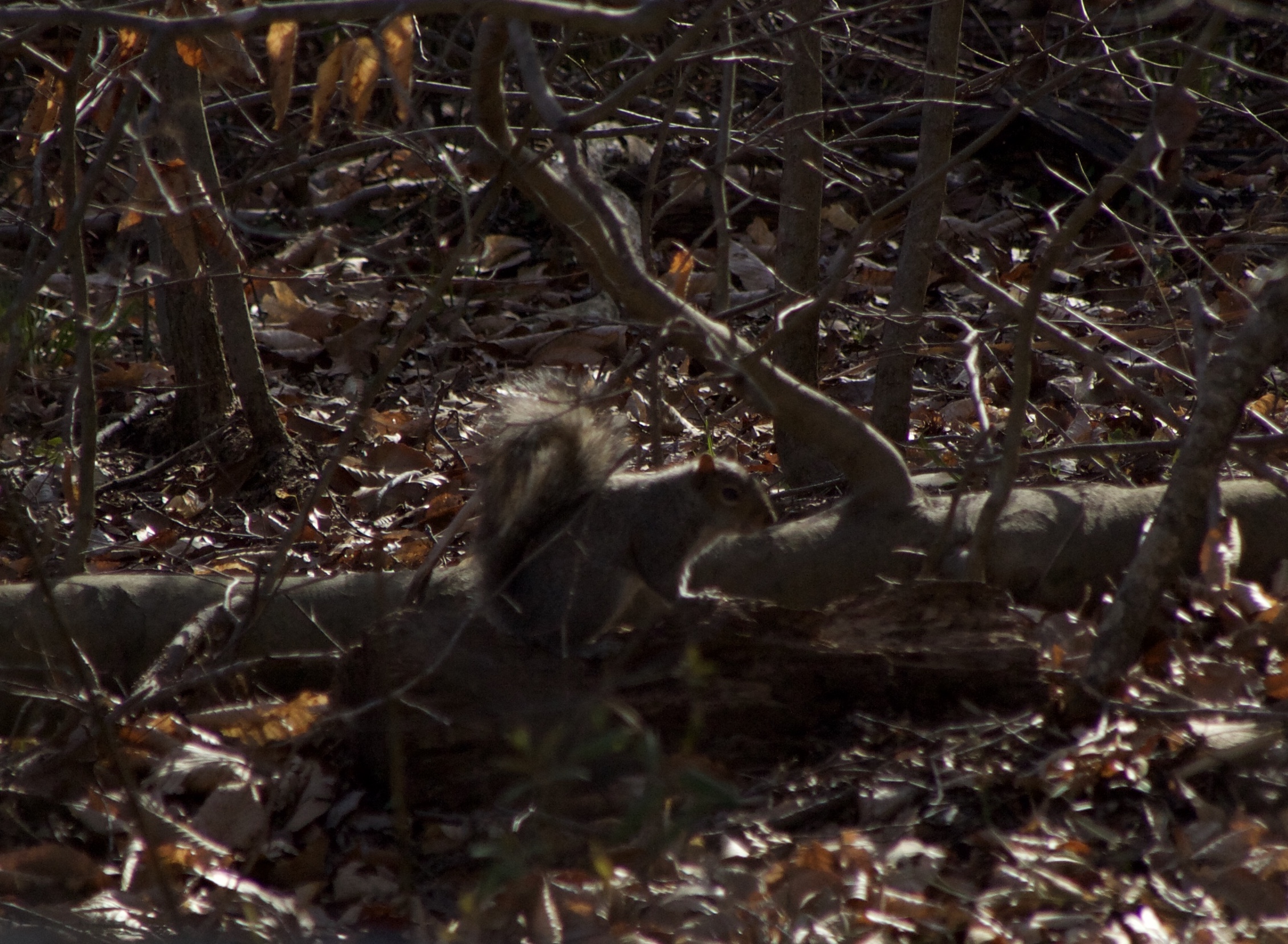 WHY DID YOU CHOOSE TO HANG AROUND AT MASON?

Because it is a great campus obviously! There are so many trees to climb and explore. I also love interacting with Mason students. They are always so friendly and try to feed me stuff.

WHAT DO YOU DO AT MASON?

I like to spend my time climbing trees and looking for fruits and nuts. I also enjoy running around campus from time to time for no reason. But my favorite thing to do is to hide in the bushes and jump out right as someone is passing by just to freak them out. This is usually the highlight of my day.

WHAT IS THE WORST THING A MASON STUDENT TRIED TO FEED YOU?

There was this one time when a student tried to feed me a piece of cheese, and it smelled really bad. I’m pretty sure it was rotten, and he just felt that it would be better to feed me this piece of rotten cheese than throw it in the trash. Obviously I did not go anywhere near it, and let that be a lesson for all of you. If you are debating between feeding us something or throwing it in the trash, throw it in the trash. I might be a squirrel, but I have standards.

WHAT ARE YOUR GOALS FOR THE FUTURE?

I don’t really have any set goals for the future. I live more on a day-to-day basis, if you know what I mean.