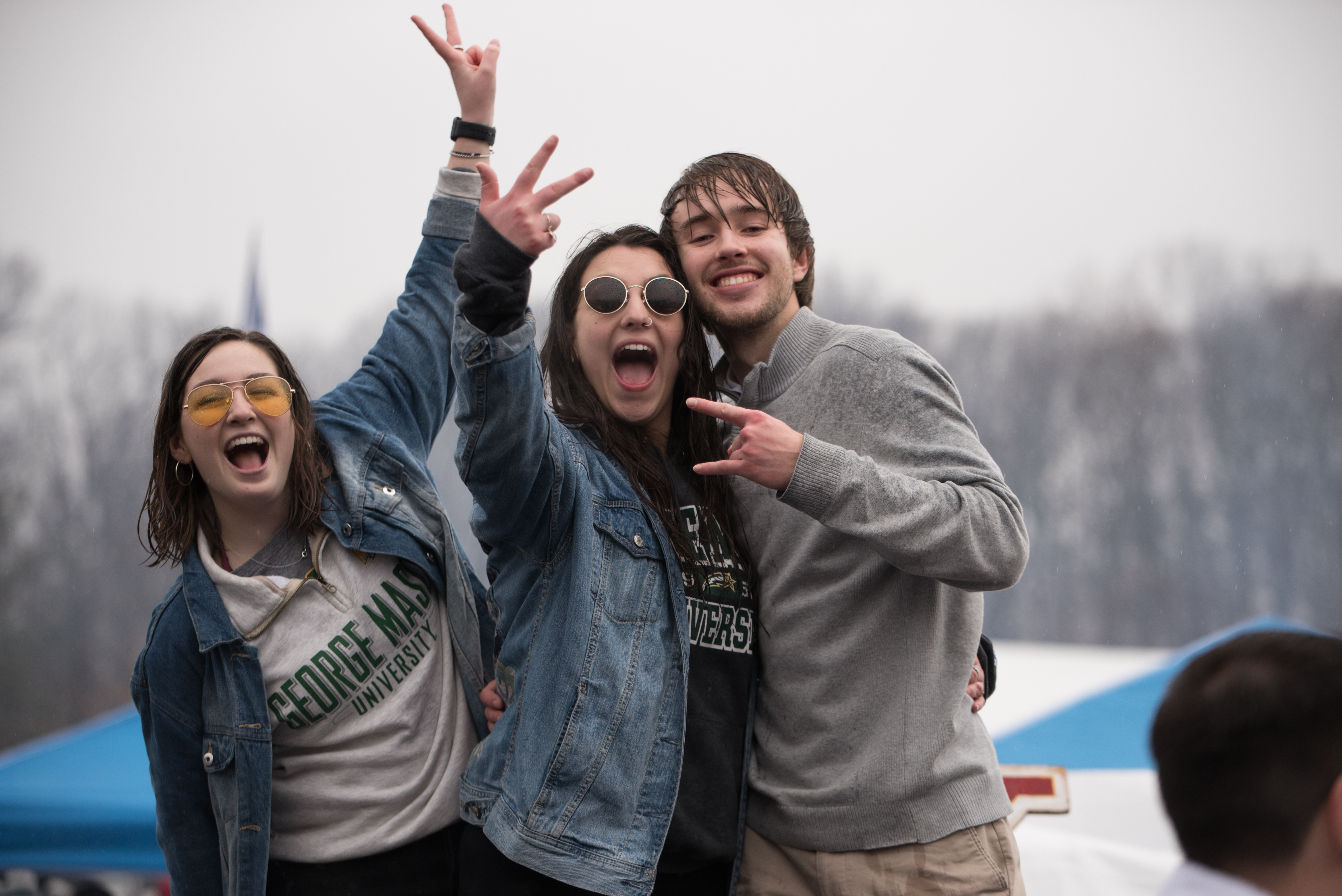 A look into how PAC, Athletics and other departments are fighting the “commuter school” stigma

As of Fall 2018, of the 37,316 students enrolled at Mason’s U.S. campuses, only 5,772 undergraduate degree-seeking students live on one of the three U.S. campuses. With many students living off-campus, Mason has earned a reputation as a commuter school, which has caused challenges fostering school spirit and maintaining student involvement on campus.

Several departments and organizations on Mason’s campus have taken action to increase school spirit and student involvement across the board.

The Patriots Activities Council (PAC), a student-led programming board, was established to negate and eliminate the idea that there’s nothing to do on campus.

“PAC likes to boost school spirit [by] doing things like participating in homecoming, as well, and creating a space for all Mason students to feel at home and involved through events on- and off-campus,” said Salma Hamze, director of publicity for PAC. “Events like High-5s, which are off-campus student appreciation events we help commuters feel a part of the Mason community.”

High-5s take place throughout the year and comprise of Student Involvement and PAC members handing out free food and high-fives to commuters in the parking lots in the morning and evening. PAC also works on a variety of other events throughout the year including Homecoming, Mason Day, Gold Rush and more.

Hamze also addressed ways to increase student attendance at school events. She highlighted that this would require a change in Mason’s culture.

“Mason has a reputation of being a commuter school, so it’s hard to change that,” said Hamze. “It can be done by working with freshmen and trying to boost their school spirit through things like Homecoming and Gold Rush. Having more events related to Mason Athletics would be beneficial.”

Dawn Hicks, director of community relations for Mason Athletics, echoed the same sentiment of increasing partnerships across the Mason community. Hicks described how they have been receiving feedback and suggestions from organizations. They are working to implement some of these ideas in future seasons for all athletic sporting events, not just basketball.

She continued, “For example, when I talked to presidents of some of the Greek organizations, it’s promoting their organization at an event. So one thing we implemented is that, if they inform us in advance that they’re bringing a group to a game we will not only announce them over the PA during the game but we also create a video board so everyone can see that those organizations are in attendance.”

Part of this is that if a super group of at least 25-30 people notify Athletics in advance that they will be attending, Athletics will provide them with pizza and feature them on-camera when possible.

Another aspect that Athletics has been working on is increasing awareness.

“Well, the biggest thing to entice [students] to come is to talk about the experience itself. We have―[for] our basketball games in particular―a lot of giveaways. We have found that some students are simply not aware of them,” explained Hicks.

To increase awareness, Athletics has been sending out weekly emails to the student body highlighting sporting events and giveaways, utilizing their social media accounts and canvassing campus. Members of the marketing team and Hicks have gone across campus passing out flyers for sporting events, showcasing giveaways-of-the-week and sharing that experience with students one-on-one.

“In terms of increasing school spirit, what we are finding is that the more students experience the games and [come] together and collectively cheering (sic) on our team, the more that promotes school spirit at Mason,” said Hicks. “Because we are all coming together as the Mason Patriots to cheer on our team against an opponent, so in those moments and at those games, we’re all on the same team, and that fosters a feeling of togetherness and spirit.”

Hicks talked about following up with students they had talked to during the week: “We look for them in the stands, and we wave to them and say hi. We’ll go into the stands and thank them for coming.”

Another topic of interest for students is the discussion of planning more tailgates, besides the one for Homecoming.

Hicks addressed the idea of more tailgates, which has been a major discussion point for years in Mason Athletics, but explained complications that come with it in regards to limited parking spaces.

“When we have track meets and baseball games, there really isn’t much room to tailgate, because the parking lot is full,” Hicks said. “That again is the greater issue: It’s not that we don’t want to do it, it’s what is the best way to execute [it].”

Some options they are looking at are increasing smaller “tailgate experiences” and hosting more off-campus viewing parties, so commuters can watch the games with other students.

One upcoming non-sporting event that students can look forward to this semester is Mason Day, an annual carnival-like festival with rides, food and performances. Mason Day is Mason’s longest-standing tradition, and this year will mark its 54th year. Students can stay tuned for more information on Mason Day as its released in upcoming weeks.