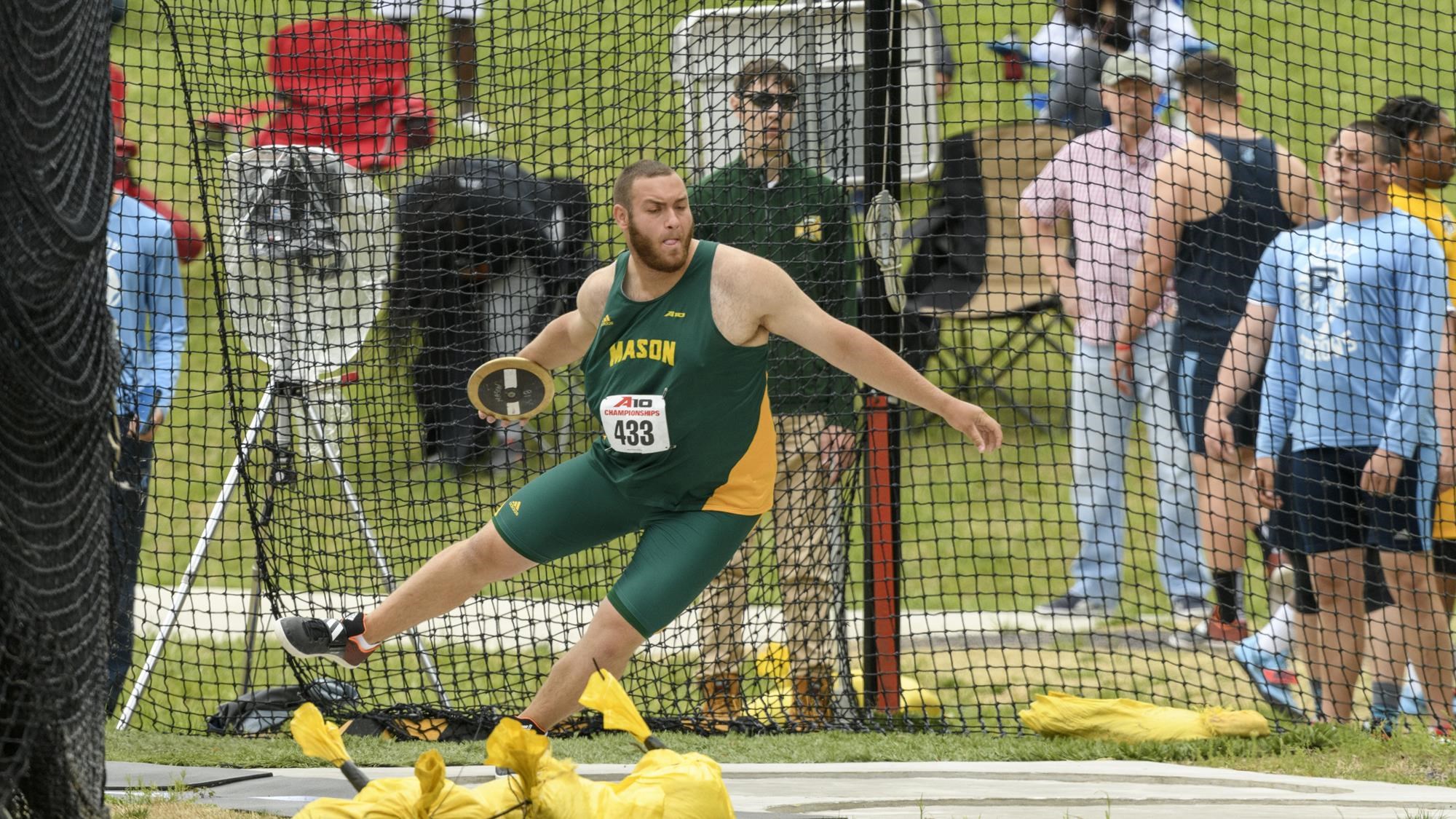 Some things just run in the family. Sophomore thrower Benjamin Viau’s father was a thrower at Millersville University, and when his son started high school, Viau encouraged him to give it a shot because he thought he’d be good at it. And he was.

“So freshman year, I was on the junior varsity team, which is [grades] seven through nine,” Viau said “Since it was my first year, they didn’t move me up, because they didn’t know I would be pretty good. After that, I was like, ‘Yeah, I’m excited to go to varsity.’ After sophomore year, I was like, ‘I want to do this in college.’”

Viau did not tour Mason for the first time by choice. While on the way back from the New Balance National Meet in North Carolina, his parents insisted he visit a school. They chose Mason.

He reflected on it, saying, “It was just what I wanted. It was just the only one that really stood out to me. I didn’t actually choose it for track. I just chose it because I liked the school and they had a track team.”

He also earned a silver medal in the discus throw with a personal best mark of 49.67 meters at the Atlantic 10 Championships May 2. However, Viau expected more from himself during his first collegiate season.

“I actually expected to do a little better my freshman year, but the whole adjusting-to-college in general and weight-room stuff completely messed me up, because I wasn’t used to that much training,” said Viau. “But I wasn’t really disappointed last year, and this year, I thought I would do significantly better than last year with the adjusting and being used to lifting and all that.”

Viau set a new Mason record in the weight throw at the Father Diamond Invitational, the first indoor meet of the season. The record may not stand long though, as he has several more meets this season as well as two additional full seasons to continue to break his own record.

“I expected him to break the record, but doing it the first week out was pretty awesome, which sets him up for a good season,” said assistant coach Becky Hartley. 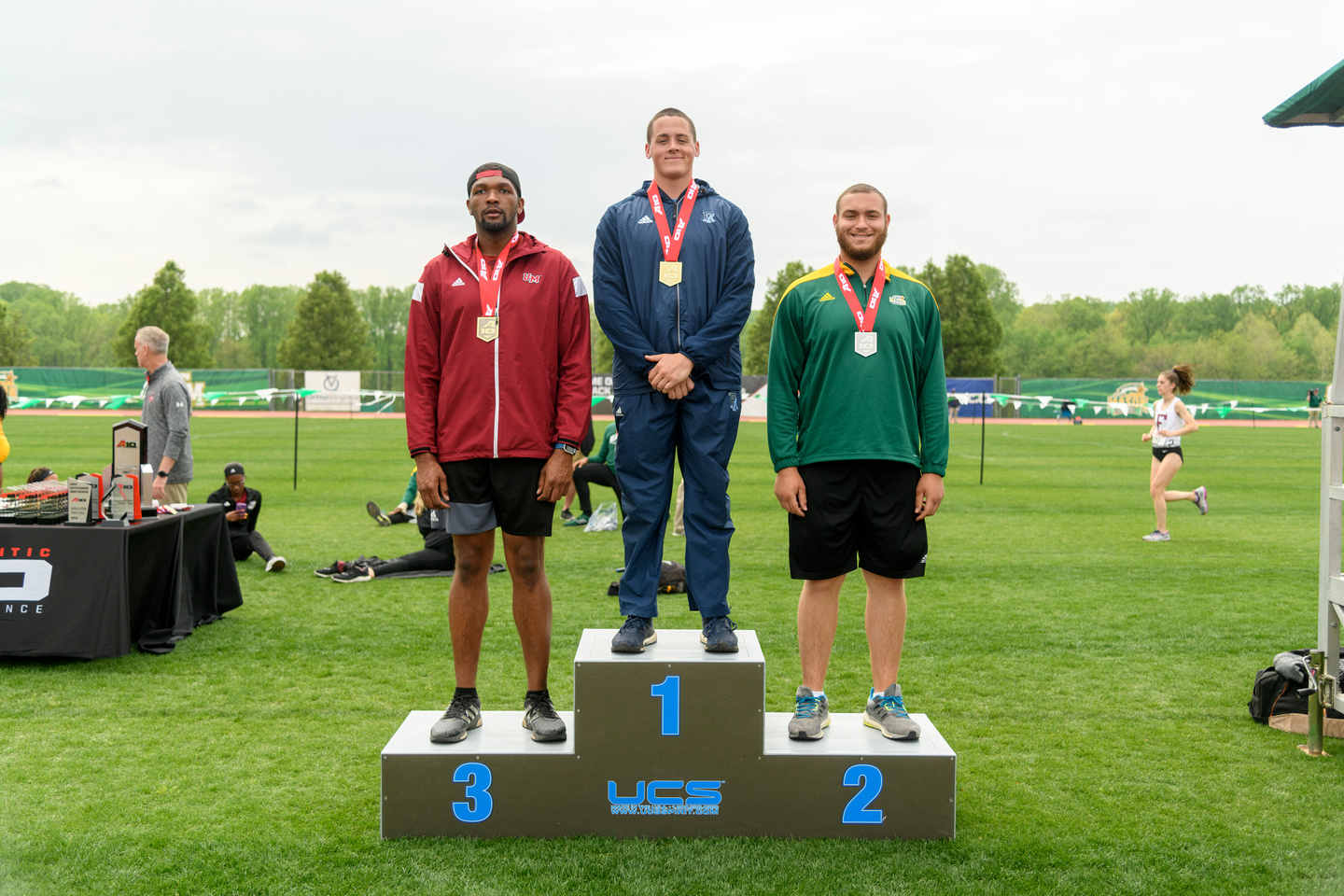 Hartley went on to say, “Oh, he’ll break that again. He’s just a sophomore. I think he should go after the shot put and discus records, but I think his teammates will have something to say about that.”

It was Hartley who told Viau he had broken the school record, but he didn’t find out by how much until later in the meet.

“I knew I broke the record because I thought they said it was 16 meters 60 [centimeters], but it was 17 meters 60 [centimeters] and I had no idea I broke 17,” he said. “So I was happy I broke the school record. I was hype. And then my teammates were all high-fives and chest bumps and stuff. [It was] not until almost the next round [was] over that I realized I threw 17-60. I had no idea, and Coach was like, ‘You had no idea you threw 17, and you were that happy?’ and I was like, ‘Yeah, I broke the school record.’”

Viau’s goals for the rest of the season are simple: “Another school record in the discus.”

He added, “It’s doable, so I’ll do that. For shot put, I’d like to get top two if my teammate Jaylen doesn’t throw really far, because he’s number three right now. I want to pass him in the spring at the latest this year.”

When asked what he likes best about throwing, Viau said, “The fact that it’s low-key, I think, fits me, because I don’t really like being in the spotlight a lot. With throwing, yeah, you’re the only one in a circle at a given time, and everyone’s watching you, but you just kind of zone them out.”

Basketball Over the Break