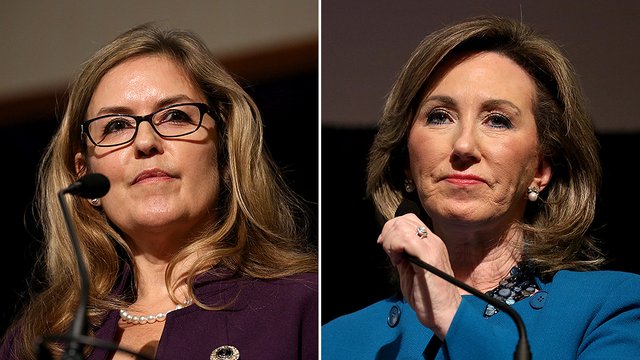 An informed observer of politics could make two propositions about the election for who will represent Virginia’s 10th congressional district in the next Congress:

According to conventional wisdom, both propositions seem true.  According to electoral reality, one will be true and the other false on the first Tuesday in November. Which one though?  That’s a head-scratcher.

The funding story in the race shows both sides do not know what to make of it.  The National Republican Congressional Committee is standing by Comstock and even held a fundraiser headlined by House Speaker Paul Ryan.  However, Congressional Leadership Fund, the PAC associated with Ryan and House leadership, never spent a penny for Comstock, believing their resources would be better spent elsewhere.  On the other side, the Democratic Congressional Campaign Committee and House Majority PAC canceled their ad buys because they think Wexton will win, but Democrat (he’s back!) Michael Bloomberg recently announced he is spending big for Wexton, indicating he believes she needs help.

It wasn’t supposed to be this way.  Anyone who’s anyone wrote off Comstock after election day in 2017 when Republican gubernatorial nominee Ed Gillespie got hosed (disclosure: I worked for the Republican Party of Virginia for the 2017 cycle).  In 2016, Democrats were already licking their chops when Hillary Clinton won by ten percentage points in Comstock’s district.

Democrats’ jubilation always seemed a bit premature. You know who else won Comstock’s district in 2016? Comstock. By six.

Furthermore, since 2017, Democrats have done significant damage to their credibility as the party to restore order and normalcy to a Trumpified government. Governor Ralph Northam was successful because he seemed like a reasonable, normal guy and was from the opposite party of Donald Trump. While Virginia 10 is certainly getting bluer, the subdivision-dwelling, wine-tasting and comfortable voters of Loudoun County will be hesitant to support the party associated with pounding on the Supreme Court doors and rampant rowdiness that led to hundreds of arrests during the Kavanaugh confirmation rodeo and Wexton will have a hard time mollifying that hesitation.

Wexton must also be concerned that the voter enthusiasm gap the Democrats were touting a few months ago has disappeared; The most recent poll shows that 79% of Republicans and 81% of Democrats say they will certainly vote.

All of this suggests Comstock will not be swept away in a blue wave. This is a competitive race, and the Democrats would be wise to treat it that way instead of wasting money to unseat safe Republicans, like Rep. Devin Nunes in California.

If someone had said that Virginia 10 would be competitive a few months ago, it would have seemed absurd.  If someone had said that the Democratic Party would scrap its winning message from 2017 in favor of a men-should-shut-up, “I’m-knowingly-violating-the-rules,” harass-your-opponents-in-public brand of disruptive, rude, identity politics more fitting for a radical activist strategy meeting than a general election, it would have seemed absurd too.  It’s a head-scratcher who will win this election in Virginia 10, but it’s not a head-scratcher which party has done more to damage its candidate’s chances in the last few weeks.