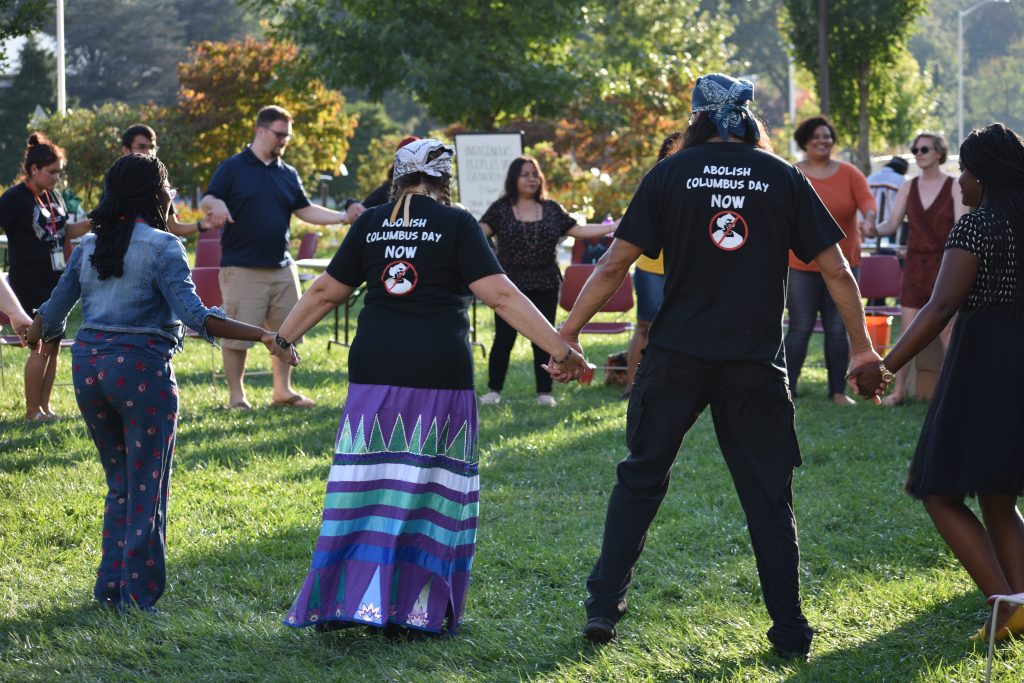 A Tribute to the Original Inhabitants of America

With students from nearly 130 countries, it is safe to say that Mason has a diverse campus. Learning about different cultures is something all Mason Patriots enjoy doing.

That’s why, on Oct. 8, Mason students held an event to honor Native Americans and celebrate their culture.

The event was a collaboration between Native American and Indigenous Alliance (NAIA), Office of Diversity, Inclusion, and Multicultural Education (ODIME), LGTBQ Resources, University Life, Social Action and Interactive Learning (SAIL) and the School of Integrative Studies.

Held outside of Merten Hall, the event went on from 2 to 6 p.m. It featured intertribal drum group, Uptown Boyz, who played throughout most of the event and encouraged people to participate in the ritual dance. In addition, students took part of sage bundling, a ritual performed by Native Americans in order to cleanse one’s soul. Student were also given a chance to test their knowledge of ancient American tribes through a series of fact-or-fiction cards. These cards contained facts that ranged from what kind of food Native American tribes ate to what areas different tribes lived in. The Kinwaw and Pistacaway Conoy tribes occupied the land Mason is built on.

Noah Black, one of the organizers of the event, had been planning for Indigenous People’s Day with his colleagues for nearly two months.

Black felt that it is important Mason students take part in and know more about Native Americans, who were indigenous to this land long before the settlers came and became known as the U.S. or referred to as the “New World”.

NAIA previously submitted a petition to the university to recognize Columbus Day as Indigenous People’s Day, to honor the indigenous who occupied this land before Columbus came.

“To Native Americans, this land is not Virginia or the US,” Black said. “They were here before that.”

This event will not be the last to honor Native American culture and traditions. In November, more events will be held throughout the month to celebrate indigenous people.

“We will be honoring indigenous people all over the world,” Lucas Rodriguez, an  organizers of the event and NAIA member said. Rodriguez hopes to expose Mason students to indigenous cultures from the Americas, Africa and Palestine.