MASON MEN’S TRACK AND FIELD COME IN SECOND, WOMEN IN THIRD IN THE A-10 CHAMPIONSHIP

Virginia Commonwealth University was crowned the Women’s A-10 Outdoor Track and Field Champions with a score of 159 points, building off of their Indoor title from February. Mason came in third with 107 points, only two points behind Dayton (109).

Many Mason athletes had standout or record breaking performances.

Events kicked off at 10:30 Saturday morning with perfect track and field weather — 70 degrees and cloudy.

First- Men’s hammer throw, an event in which Rhode Island captured the top four spots. Mason was able to secure a fifth, eighth, and ninth place finish, thanks to seniors Pat Hodge and Jared Lewis, as well as freshman Avory Ransome.

The heptathlon, a multi-day event that consists of seven track and field events, featured 14 athletes. After day one and the 100-meter hurdles, high jump, shot put, and the 200-meter, VCU junior LeClare Beres was in first place, leading the field of 14. Danielle Maynard, a freshman from Mason finished day one in seventh place, and 237 points out of first place. Maynard struggled in Sunday’s events, including a last place finish in javelin, and would go on to finish 11th overall.

The decathlon, another multi-day event consisting of ten track and field events, was dominated by Rhode Island, who was represented by three of the seven athletes.. After the 100-meter dash, long jump, shot put, high jump and 400-meter, the three Rhode Island athletes (all freshman) were in first, third and fifth place. The top three were the same by the end of competition on Sunday, with Drew Nealey of Rhode Island winning gold.

Mason senior Shelby Garnand won her second straight A-10 gold medal in the pole vault. Freshmen Autumn White and Camryn Harris placed third and fourth in the event as well. Dayton senior Leah Frischmann also jumped 12 feet, 7.5 inches, however Garnand had cleared every height previously on the first try, and was therefore declared the winner.

Redshirt junior John Seals came in third in the long jump, while senior Raeshawn Bishop finished in fourth place, just off of the podium.

Redshirt junior Trent Lancaster finished the 3000-meter Steeplechase in 9:02.77, good enough for second place, and a school record. This was Lancaster’s first A-10 medal of his career. 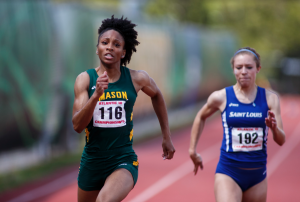 Both of Mason’s track teams were in second place after competition finished on Saturday. The Women’s team was 22 points behind Dayton, and the Men’s team found themselves 55 points behind URI. However, only six events were scored, with 16 more to go on Sunday.

These two days were filled with excitement and close finishes, though none more exciting, or closer, than the end of the Men’s 4×400-meter relays. The anchors for Mason and VCU were neck and neck during the last 50 meters. A last second push from Mason led to edging out VCU by just five hundredths of a second. Mason also broke the A-10 Championship record they set last year by more than a second with a final time of 3:09.10.

The anchors of both the Men’s and Women’s 4×400-meter also won gold in 400-meter dash. For juniors Rico Gomez and Sarah Moore it was their second consecutive A-10 outdoor gold in this event. After the meet was over the individual awards were then handed out.

Freshman GJaudy John-Wallace was named the Most Outstanding Female Rookie, after winning silver medals in both the 100-meter and the 4×100-meter relay. John-Wallace also won the top rookie award at the A-10 Indoor Championship.

The Patriots will compete in the ECAC Championships on May 12-13 in Princeton, NJ.
Photos courtesy of Craig Bisacre/Mason Creative Services

5 ways to destress for finals