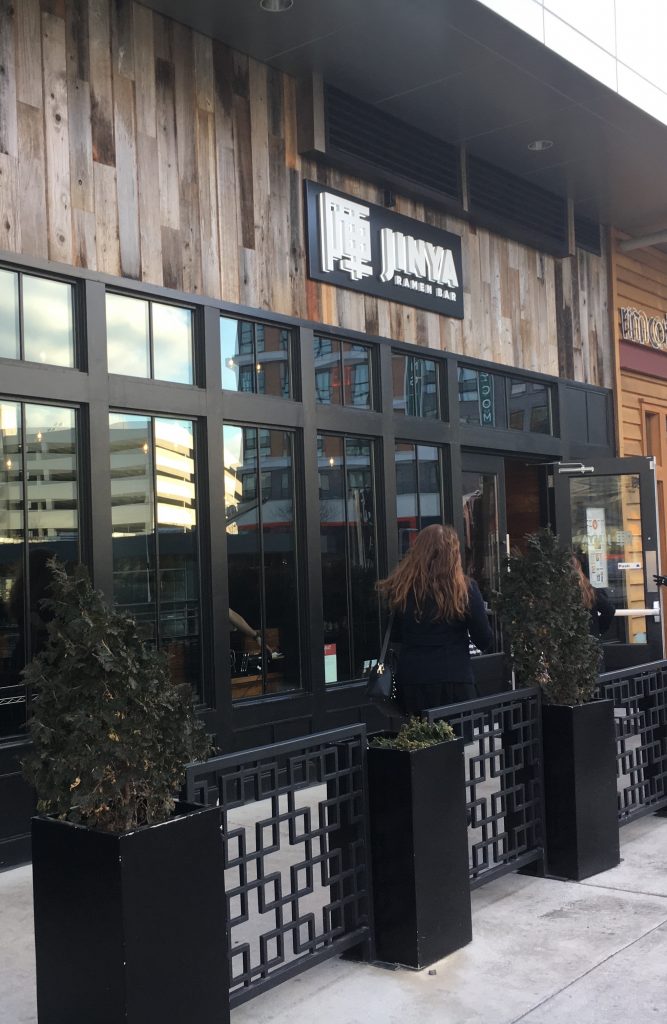 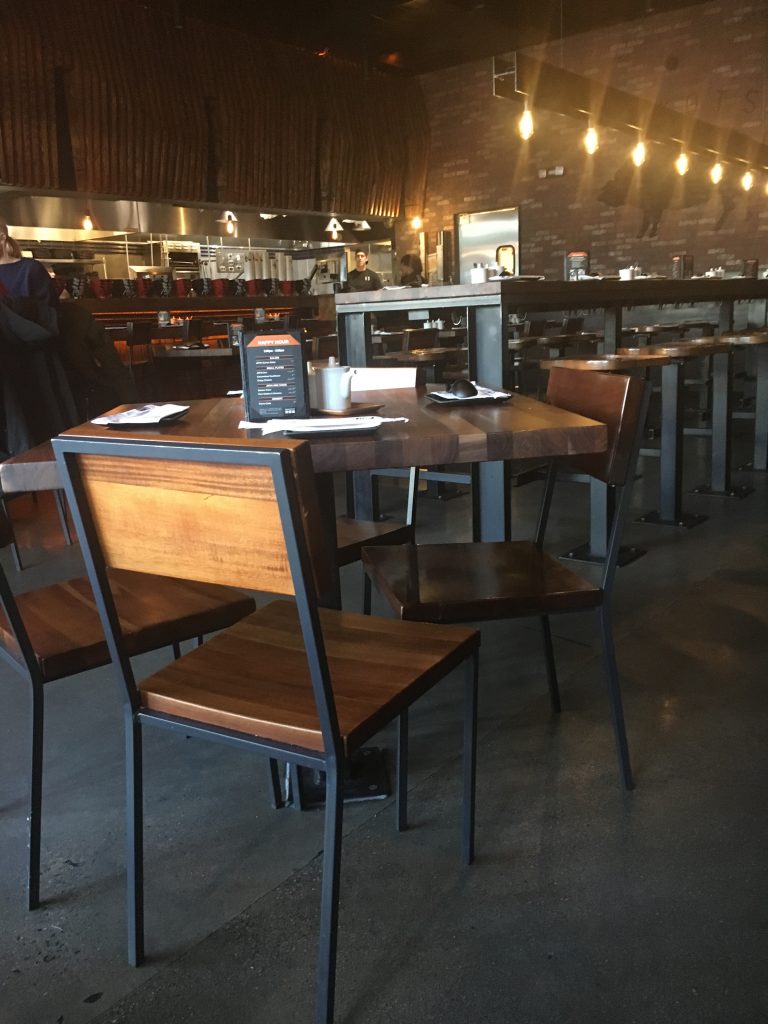 JINYA is a growing culinary franchise specializing in authentic Japanese ramen. With a name derived from a Samurai soldier, founder and chief executive officer Tomonori Takahashi opened the enterprise in his native Japan in 2000.  JINYA has more than 30 locations in Japan, the United States, Canada, Indonesia, and is continually expanding. 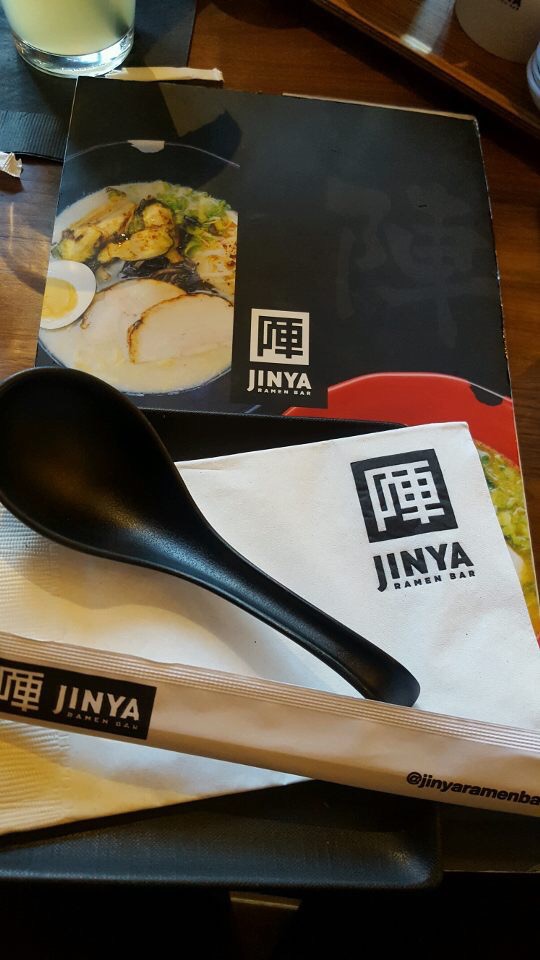 “Irasshai” a Japanese greeting, is cheered by the workers as one enters Jinya. The establishment’s industrial-inspired décor creates a modern flare, attracting a particularly young clientele.  The izakaya-style restaurant is similar to a dive bar in which tapas and other delectable dishes are shared amongst friends in a casual, open setting. 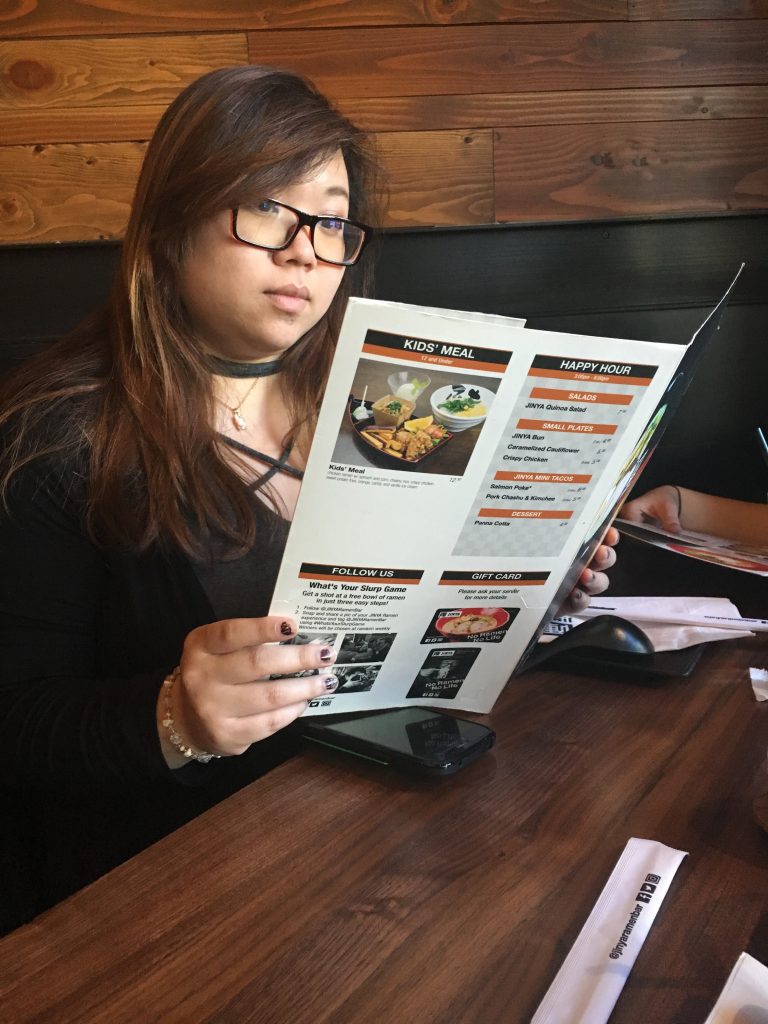 JINYA offers a variety of small plates including pork gyoza dumplings, tossed edamame, and salmon cilantro sashimi. As Diana Nyugen decides what to eat first, she notes the possibility of adding ingredients, designing a unique bowl of ramen suited to her personal tastes. 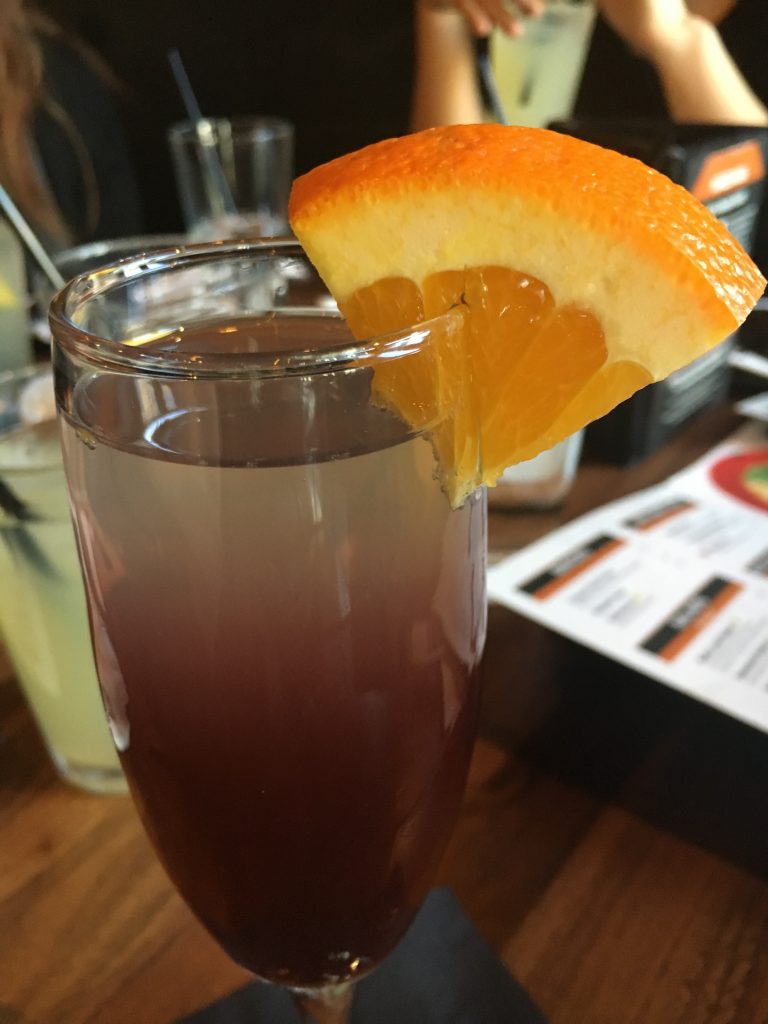 Diners may choose to drink cocktails with their main course with cocktails such as the Dragon Whisperer, a concoction of sparking red wine, raspberry liquor, and yuzu lemonade made from a tart citrus fruit, which resembles a grapefruit with hints of mandarin orange. 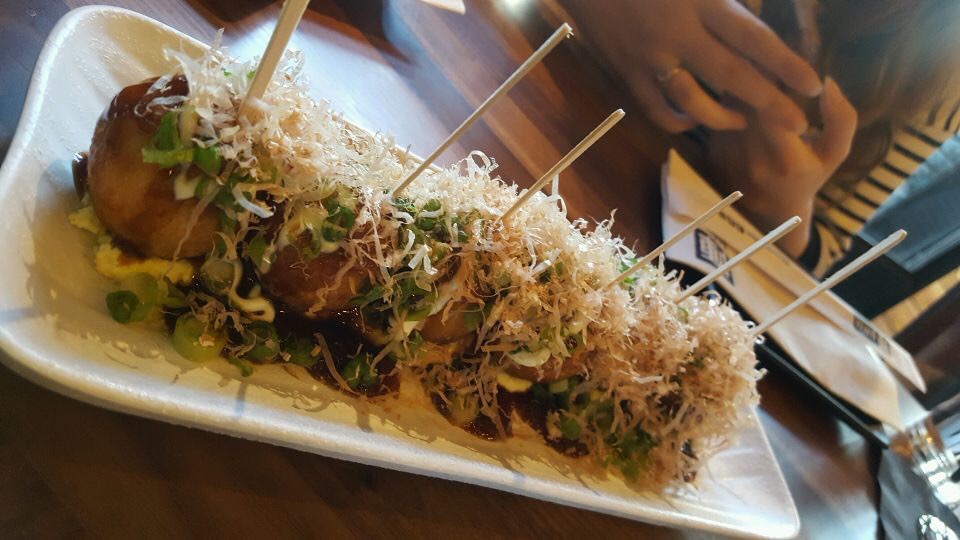 Popularized as a Japanese street food, Takoyaki is made of battered and fried octopus. Caution is advised when taking the initial bite, for center is exceptionally hot.  Bedded over egg tartar and topped with kewpie mayonnaise, okonomiyaki sauce, green onion, and smoked bonito flakes, the assortment cools the palette after such a temperature shock. 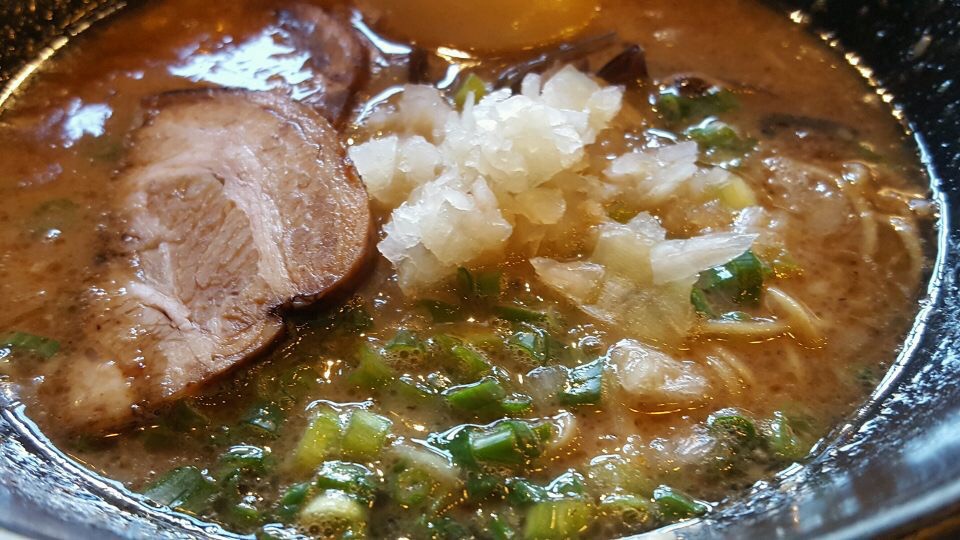 “Itadakimasu” translating to, “I gratefully receive,” is stated before commencing one’s dining experience in Japan. Pictured is the chef’s special, Tokyo Tonkotsu Ramen, made with pork chashu, slow-roasted pork belly.  Green onion, kikurage mushrooms, onion, egg, and fish powder are accompanied with thin-made noodles, complimenting the balance pork broth.  Though many of the dishes feature pork as the main protein, chicken and vegetarian dishes are offered to meat dietary restrictions. 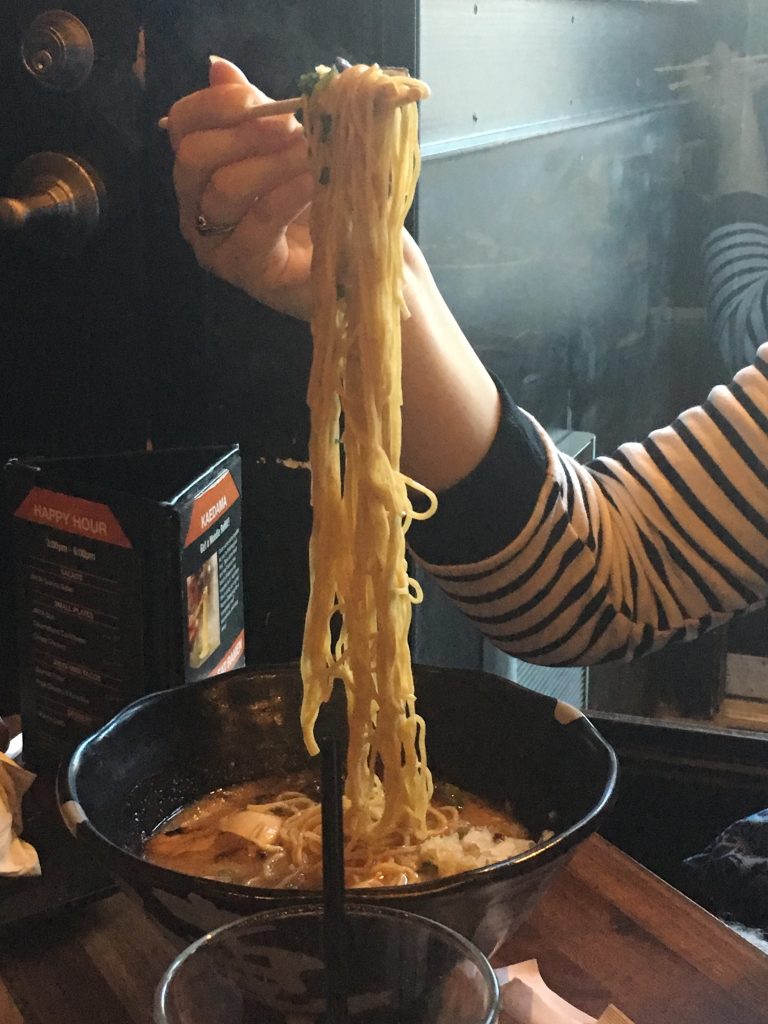 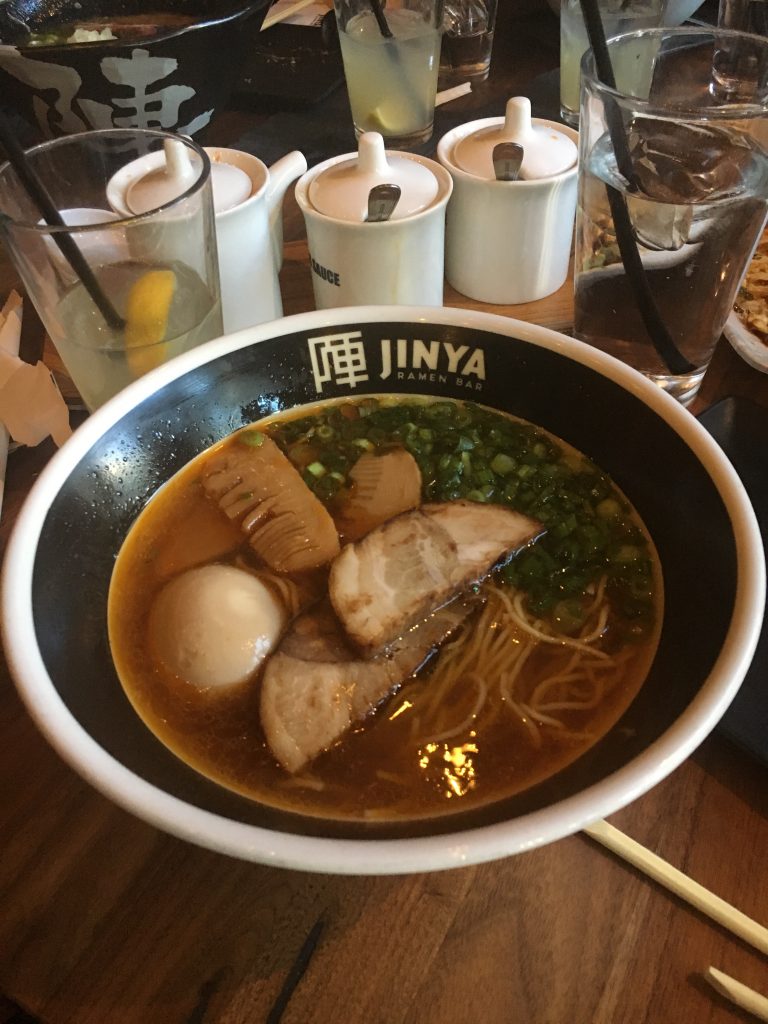 Upon sampling the aromatic broth, gently guide the noodles over added assortments of meat and vegetables, combining the array of salty, spice, and umami flavors. 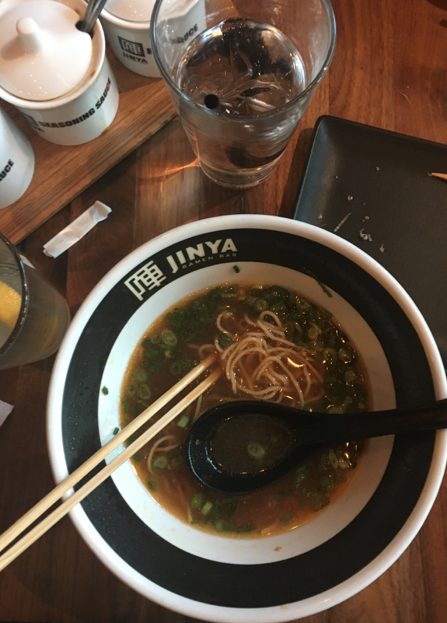 Jinya’s Old Skool Ramen is a chicken broth based dish with fish oil, pork chashu, egg, bamboo shoots, green onions, and thin noodles. The dish provides a conglomerate of flavors used in traditional Japanese cuisine.  Guests use the provided utensils to slurp the noodles and broth.  By aerating the aromas, the flavor of the ramen intensifies. 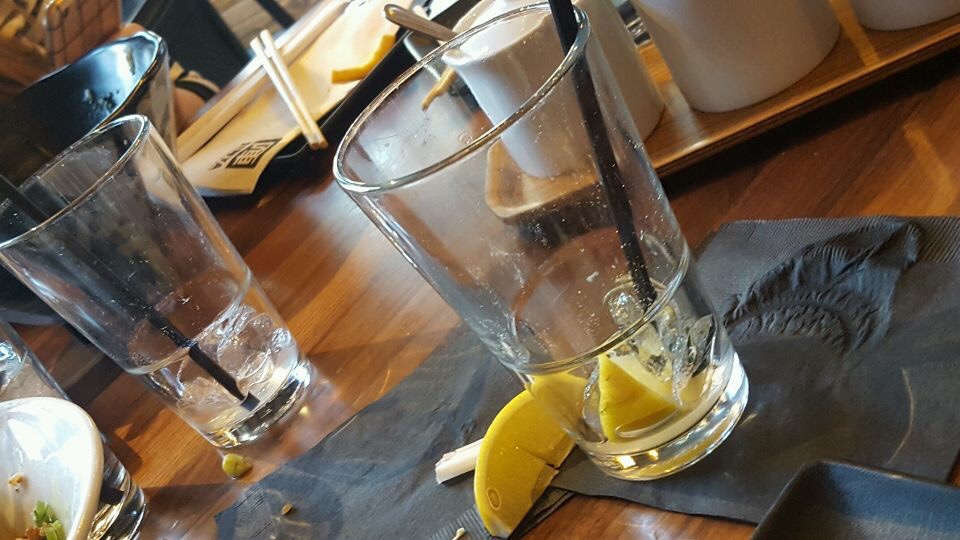 It is in good style to finish a dish to that last morsel of food within the Japanese culture. “Gochisosama deshita,” meaning, “Thank you for the meal,” is traditionally spoken at the end of the meal in Japan.  The customary saying expresses one’s gratitude not only towards the chef, but to the high-quality ingredients consumed. 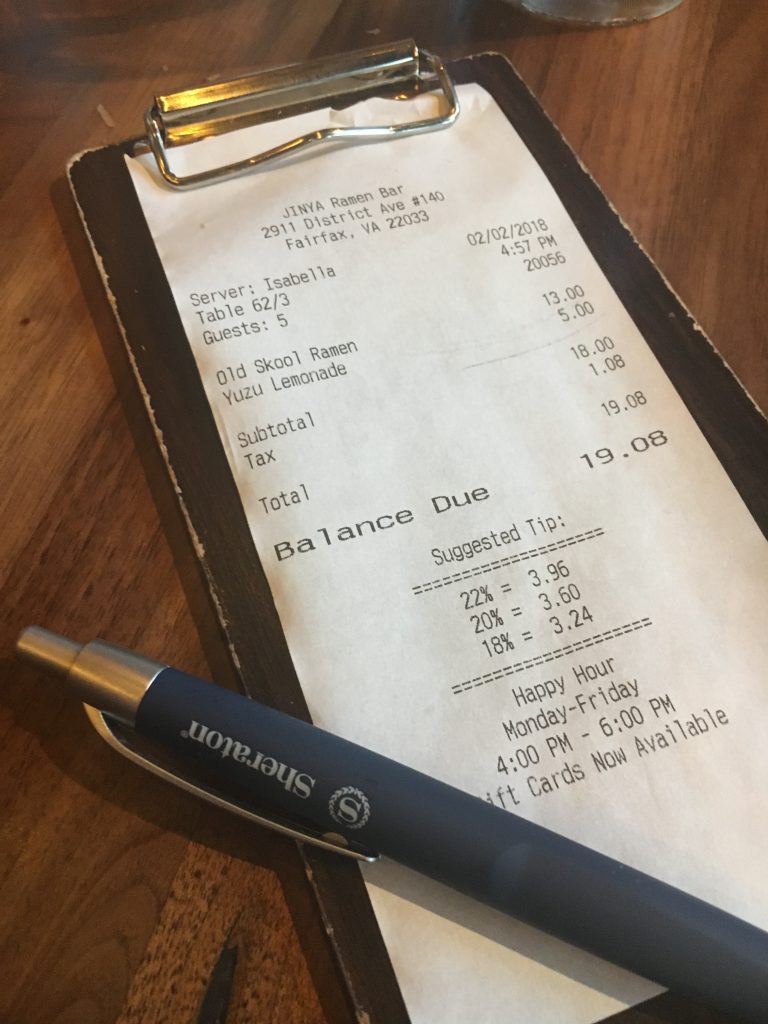 While tipping is not customary in the land of the rising sun, in the United States providing a generous tip is the unspoken way of showing appreciation for a delightful dining experience.