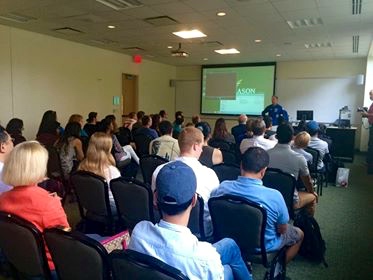 Astronaut Timothy Kopra recently came to Mason to tell students and staff about his career with NASA and his experience in space after returning in June from a six-month mission to the International Space Station.

“Astronaut Kopra is one of the true pioneers of our day,” Professor Michael Summers of Mason’s Department of Physics and Astronomy said. “His work on the space station is paving the way for our further manned exploration of the moon, the asteroids and then Mars.”

According to Summers, the Department of Physics and Astronomy was hoping to bring inspiration to its students by hosting Kopra.

“Our hope is that it will motivate more students to learn more about science, engineering and math,” Paul So, an associate professor in Mason’s Department of Physics and Astronomy, said.

Kopra began his career as a second lieutenant in the U.S. Army after graduating from the U.S. Military Academy in 1985. He went on to eventually become an experimental test pilot. After becoming an astronaut in 2000, Kopra said he went through two and a half years of intensive training, multiple spacewalks and eventually became Commander of the ISS.

During his talk, Kopra shared a video of his latest time in space and explained the process of getting there, his time on the ISS and the adjustment upon return. Eight minutes after being launched in a Russian capsule in Kazakhstan, Kopra said the shuttle finally reached space. According to Kopra it took a total of about six hours to travel from Earth to the ISS.

Once onboard, the astronauts spent their time doing experiments and researching subjects like the effect of zero gravity on bone density, muscle mass and intraocular pressure and the flammability of various materials.

After 186 days in space and a three and a half hour flight back, the astronauts finally landed on Earth. While the pictures might be a cool reminder of where he’d been, Kopra claimed the readjustment felt like having a hangover and the flu at once.

Even though Kopra came to Mason alone to explain what NASA has been doing in space, he credits the success of his mission as a team effort. He added that not only are there astronauts in space, but there are also hundreds of people on the ground working as support.

Looking forward, Kopra said the future of the work on the ISS will be looking at better and more thorough life support in a carbon dioxide-heavy environment. His main point for the future, though, involves the speed of technological advancement.

“We need to get where we’re going a lot faster,” Kopra said.

Summers said not only has Kopra already accomplished so much during his space career, he has continued to inspire the next generation of space pioneers.

“We wanted Astronaut Kopra to show our students what is going on with NASA and the space station,” Summers said. “NASA has big plans for the next few decades and it’s important to have students informed about the opportunities working with them.”

Summers added that Kopra’s speech had more to offer his audience than just information on NASA’s latest work and successes.

“From a broader perspective,” Summers said, “I also hope that the personal achievement demonstrated by Astronaut Kopra will encourage all of us in the audience to pursue the best that we can be in our life.”