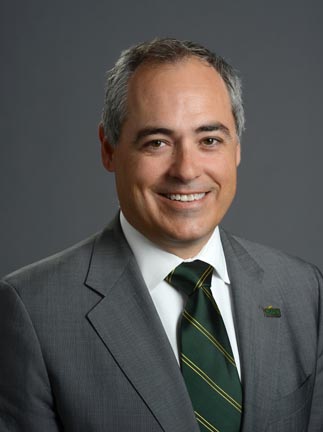 This past December, a message from the Board of Visitors concerning the contract renewal of President Cabrera landed in every MasonLive inbox.

This renewal was the subject of a three-month process in which Mason students and administration were asked to give feedback regarding their general view of the university.

Vice Rector of the Board of Visitors Stuart Mendelshon took charge of the student feedback process and expressed nothing but satisfaction toward this operation.

“This is the first time we’ve done this. Students are consumers of the University, so it’s important to have a good response from them. … I think the overwhelming response was positive, which means the university is going in a very positive direction under his leadership,” Mendelshon said.

Khushboo Bhatia, the student body president, was contacted in September by the Board of Visitors to take charge of the student process because of her role as a student representative.

“Vice Rector Mendelshon approached me when they were forming the committee and asked me if I wanted to be a part of the process, because they were glad to have a student voice at that table,” Bhatia said.

After Bhatia agreed, the BOV sent an email to every student at Mason, asking them to give their feedback on the three years  Cabrera had been president. The responses came from mostly graduate and Ph.D. students, who cited the recent construction at Mason as well as President Cabrera’s presence on campus as major focus points.

After collecting and transmitting this data to the committee, Bhatia had to step aside to let the BOV make the final decision.

“The process was great in the sense that they really made an effort in transparency, but we shouldn’t have had different avenues to inform staff and students. I am happy that the administration was very receptive to this demand and tried to act on it,” Bhatia said.

However, now that President Cabrera’s contract is renewed, Bhatia is determined to try this feedback process again.

However, the internet surveys were not the only input included in the data. Bhatia spent the semester trying to get in touch with different student associations such as the Hispanic Student Association and student athletes.

“The feedback was verbal. I looked at our strategic plan that Cabrera worked on when he got here in 2014, and the goals that were marked here was where I based my conversation on,” Bhatia said, adding that her questions included ones like “‘Do you think that these are the values that we are living up to?'” and “‘Do you support the direction in what we are moving in this university?’”

Sophomore Joe Russell, a government and international politics major and representative of the student athletes and co-President of GMU Democrats, appreciated the administration’s effort of transparency and was happy to have the chance to express student athletes’ concerns.

One month after the process, Russell has the feeling that the student athletes’ concerns have been heard — or at least acknowledged.

“I talked with a lot of students who were in contact with Khushboo, so I think based on the feedback, that a lot of concern [has] been passed up to President Cabrera. Even the email he sent contained some of our concern[s] listed, so it was a way to see that he at least acknowledged them,” Russell said.

However, some students, like Scott Anthony Harris, who is working toward a Ph.D. in history, point out that there is always room for improvement.

“When President [Alan] Merten was there, we didn’t have any role. That’s a lot better, so we shouldn’t stop here. We should bring both student voices in the process next time, graduate and undergraduate,” Harris said.

Although some concerns may have been raised through the process, Harris said he tried to put things in perspective.

“In my ten years here it has improve dramatically. Having said that doesn’t mean we should stop. 70 percent that we achieve we should try to reach 100 percent,” Harris said. “But we should know where we come from.”