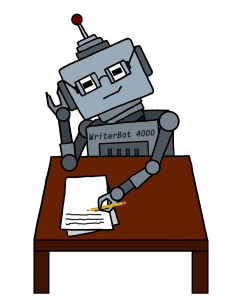 Computer algorithms are increasingly being used to generate news stories.

According to the New York Times, the advancement of technology is producing an industry of “automated narrative generation.” News sources, including the Associated Press, Forbes and the Los Angeles Times, have increasingly been utilizing these computer algorithms for immediate reporting of stories primarily in their business and sports sections.

Essentially, a computer algorithm sorts, arranges and analyzes data, and then creates a story. Currently, these algorithms are primarily used for data-heavy topics, like business and sports, but there are also algorithms capable of writing fictional novels and poetry–some are even able to take on specific tones, like sarcasm. In the early stages of the algorithms’ development, people would edit the stories after the algorithms spit them out, but the programs have become so advanced that the articles no longer need to be edited.

When Apple released quarterly earnings in January 2015, the Associated Press published a short blurb announcing the earnings, according to the Verge. The Associated Press uses Automated Insights’ Wordsmith, a computer algorithm, and has been able to publish over 3,000 financial reports per quarter, 10 times more than they previously did. Forbes uses Narrative Science’s Quill in similar situations.

Algorithms are similarly used to construct sport’s stories. On its website, The New York Times provided the following excerpt from news articles; one was written by a machine and the other by a person:

“Things looked bleak for the Angels when they trailed by two runs in the ninth inning, but Los Angeles recovered thanks to a key single from Vladimir Guerrero to pull out a 7-6 victory over the Boston Red Sox at Fenway Park on Sunday.”

“The University of Michigan baseball team used a four-run fifth inning to salvage the final game in its three-game weekend series with Iowa, winning 7-5 on Saturday afternoon (April 24) at the Wilpon Baseball Complex, home of historic Ray Fisher Stadium.”

A study conducted at Karlstad University in Sweden found that participants experienced difficulty distinguishing between computer-written and human-written sports stories similar to the ones above. Participants considered the human-written stories to be more coherent, well-written, clear and pleasant to read, and the computer-written stories to be more descriptive, informative, trustworthy and objective.

According to the Verge, some believe that using algorithms will allow journalists to write more lengthy, in-depth stories. Beth Jannery, director of Mason’s journalism program, agrees with this perspective.

“It would be wonderful to work for a news outlet that allows journalists to work on more enterprising pieces, longer investigative, you know these things take time; so if the day to day turn around can be done in a more efficient way sure. In theory it could open up room for journalists to work on [a] more in depth kind of a piece,” she said.

Jannery disagrees with the claim that the use of computer algorithms threatens jobs in journalism. Instead, she believes the algorithms are changing jobs, and using these algorithms is another skill students will need to learn. Moreover, Jannery said there are certain things algorithms are unable to do.

“As a journalist, we have to obviously fight for what we believe in. I still believe that cultivating authentic sources and truth telling and truth speaking, a nuance in an interview, watching body language, eye contact, relationship building is a part of journalism that a computer algorithm can’t replace. … We become journalists because we’re story tellers, because we’re truth seekers; I don’t think that that can be replaced by computer algorithms,” Jannery added.

Gohl believes that algorithms could become helpful to journalists and might allow them to take on more important assignments.

“It would be beneficial to those with a lot of stories on their plate. I know that at the organization I currently work for [United Service Organization], sometimes we get behind with posting on our website because we are working on the next big issue of our magazine and that takes precedence. If we could use computer algorithms to just post a quick little blurb on the site, it would take another thing off the ‘to-do’ list and make it easier for us to focus on the bigger tasks at hand,” Gohl said.

Ultimately, Gohl doubts that human reporters will ever become obsolete.

Gohl says her and others’ “passion for journalism outweighs any possibility of computer algorithms taking over.” She said, “I think it would be cool to see the capabilities of these algorithms and see exactly what they can create, though, it is no match for a person who has had actual experiences.”

“Did a Human or a Computer Write This?” Take the quiz from The New York Times.