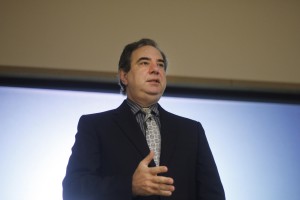 Rustici’s role as senior economic advisor simply means that he advises Carson on all things economics.

“Anything to do with money, taxes, programs — everything under the sun,” Rustici said. “If it comes to the federal budget, it’s something I’m going to be talking about. If it has anything to do with the regulatory agencies, EPA [Environmental Protection Agency], OSHA [Occupational Health and Safety Administration], EEOC [Equal Employment Opportunity Commission], anything, I’m going to have something to say about that.”

Carson is one of 15 Republican Party candidates running for president in the 2016 election. A Detroit native, Carson, 64, was the head of pediatric neurosurgery at Johns Hopkins University from 1984 to 2013 and holds 67 honorary doctorate degrees, according to his website. Carson ranks second at 20 percent, just one percentage point behind Donald Trump, according to an NBC and Wall Street Journal poll published Sept. 29.

Rustici accepted the job after Carson’s campaign managers contacted him about the position, citing his 22 years of teaching experience as part of the reason he was chosen. Rustici has taught classes in 12 different areas of economics, from environmental and international economics, to transitional economics and money and banking.

“Since I teach public policy, and I’ve taught it for 22 years, I deal with a lot of various issues that are regulations and programs and things like that, so I kind of have that background,” Rustici said. “The campaign kind of likes that — that I can talk about different areas of economics very quickly.”

Rustici said what really convinced him to accept the position as Carson’s senior economic advisor was how genuine the candidate seemed. Rustici said when he met Carson, he realized that “he and his wife [were] very decent, good people.” He continued, “I think that’s what stunned me so much, because in politics, there’s this tendency to put on the face, put on the show, and that’s not Ben. Ben is what you see is what you get. He is who he is, in all of his humbleness.”

Rustici also described his personal respect for Carson, saying, “His life story is so tremendous, he was the head of pediatric neurosurgery, he saved thousands of kids’ lives. He started the Carson Foundation to pay for college for kids who couldn’t finish school and couldn’t afford college. You suddenly realize this guy is at the peak of his life, the prime of his life. He should be fishing and playing golf, and now he’s right in the middle of politics.”

The interview process took a little over a month, and Rustici accepted the position as senior economic advisor the last week of August. Initially, Rustici only met with Carson’s campaign managers, who spoke with Rustici about his personal philosophies and Carson’s to see if the two were compatible. During the third meeting, Rustici met Carson and his wife and was questioned directly by the presidential candidate. After one more meeting, Carson selected Rustici to be his senior economic advisor, just in time for the first Republican debate.

“I taught my morning classes and had my assistant teach the afternoon classes, and my wife and I went down to the debate prep. . . . I was just one of many advisory teams that were prepping him, and I only had one hour for all things economics,” Rustici said.

When building his team, Rustici was given what he described as “full autonomy” to choose his associates. He said his team is comprised of three professors from other universities who have volunteered to work with him, Ph.D. students from Mason and former students with bachelor’s degrees in economics who are helping with data entry and other work for the campaign.

Rustici teaches four classes during the fall semester on Mondays, Wednesdays and Fridays, and he told Carson the other days of the week are his time for the campaign.

Rustici said he realizes he will be in a position to help craft policy if Carson is elected to the presidency. “I always say, ‘We’ll cross that bridge when we come to it.’ I’m going to do what I can right now, and we’ll see where it goes from there,” Rustici said.

But first, Carson must be appointed the Republican Party presidential nominee, in which case, Rustici’s time constraints would change.

“I can chew gum and walk at the same time,” Rustici said, “but I try not to do that. I’m not going to sacrifice my students.”

Rustici made it clear that his students are his first priority.

“My obligation to my students trumps even the President of the United States,” he said.