This story was originally published in the April 20 print issue.

The Braddock District is proposing to expand a section of Braddock Road.

The Braddock Road Multimodal study is proposing three projects, according to the study’s website. The first is to add an HOV lane in each direction from Burke Lake Road to Interstate 495. Second is to add a general purpose lane, which is a lane available for all vehicle use, from Guinea Road to Burke Lake Road. The third is to build a parking garage and bus stop transit center on Braddock Road near the Kings Park Shopping Center in Burke.

From Guinea Road to Interstate 495, the expansion would cover about four miles. This stretch of Braddock Road “currently handles approximately 70,000 vehicle trips a day,” according to the multimodal study website. The road’s peak hours with 3,000 vehicles are from 7:30 a.m. to 8:30 a.m. and 4:45 p.m. to 5:45 p.m., according to the March 4 task force meeting minutes. 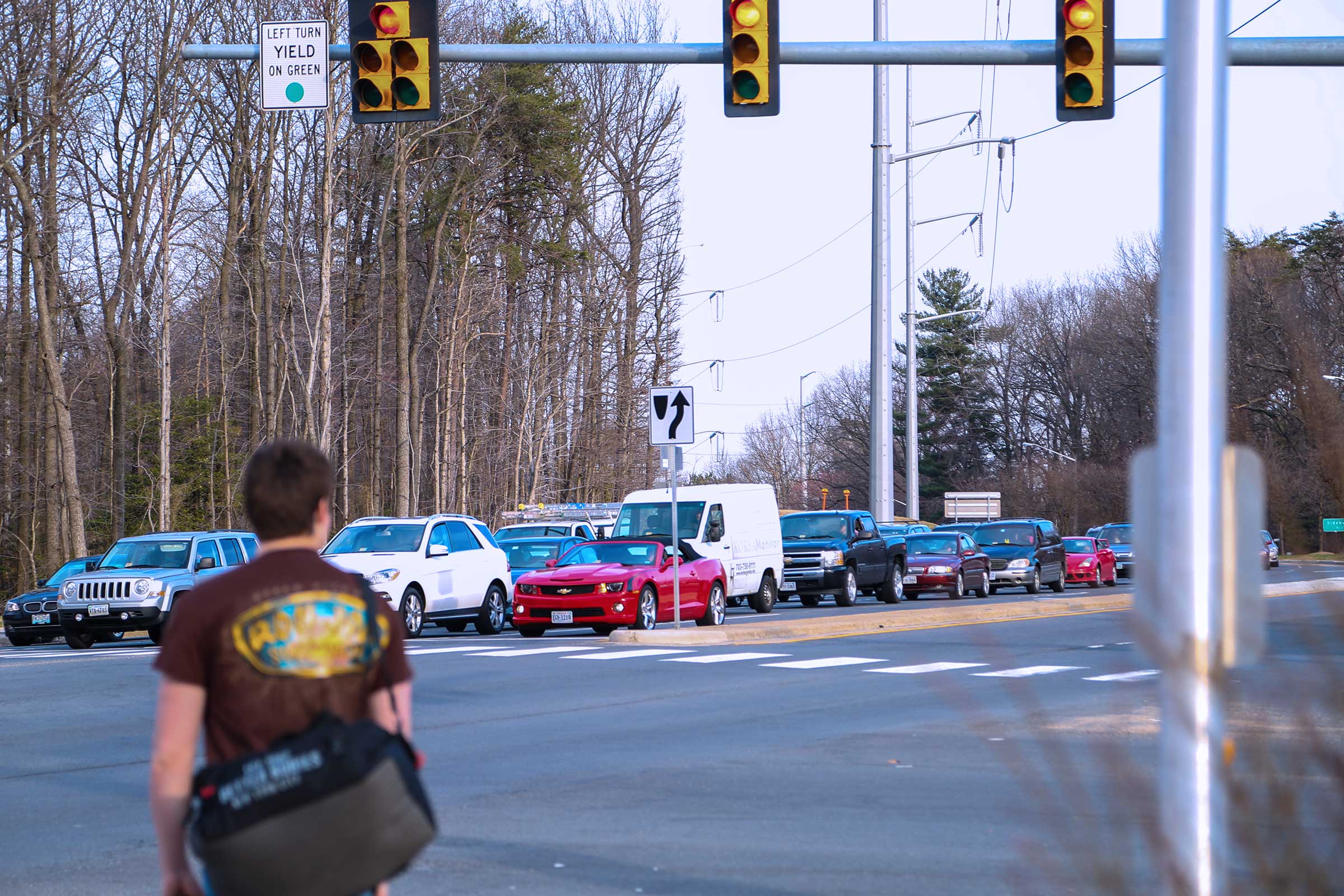 Information Systems and Operations Management major, Maria Beltran, commutes on Braddock Road to get to the Fairfax campus.

“My commute is between 30-40 minutes, sometimes more depending on the traffic,” Beltran said in an email. “It will be great if Fairfax County can expand Braddock Road at least one more lane, since a lot of the students take this route to go to either NOVA [community college] or George Mason.”

The Braddock District released an attitude survey to get commuter feedback on the multimodal study.

It was first released in March and it will be open until the end of April. It has been released through newsletters and it’s also available on the Fairfax County and Braddock District websites. So far, there have been around 500 responses.

“There’s been a lot of good comments that people have been sending in about issues and one thing that we’re seeing so far is a lot of good suggestions for spot improvements that we need to pick up along the way,” Braddock District Supervisor John Cook said.

Respondents can answer questions about their daily commutes, their perspective on public transportation on Braddock Road, the likelihood of them using HOV and their willingness to pay to use High Occupancy Toll lanes. People also have a chance to write in any concerns they may have on the possible expansion. Respondents are identified by which Braddock Road intersection they live closest too. Cook said this question is included to see if there are any geographical differences on answers or concerns.

An informal commuter parking survey was done in January 2015 to test the possibility of making the Kings Park transit center and the results were shared at the March 4 task force meeting. According to the meeting minutes, the survey was released to see the current parking demand because the remodeling of the shopping center’s Giant food store could reduce the number of parking spaces.

Cook said there are also talks of adding small parking lots, instead of adding a huge one. The Holy Spirit Catholic Church in Annandale is interested in giving some of their parking lot for commuters, according to the meeting minutes.

The most recent Braddock Task Force meeting on the attitude study was in April 1. Members from the Fairfax Advocates for Better Bicycling have attended some of the meetings to give their feedback. FABB Chairman Bruce Wright wants cyclists in the area, especially from Mason, get involved with the process.

“Braddock road is a critical connection for cyclists in the area and it’s important that whatever happens there allows cyclists to safely, conveniently get to their points of destination,” Wright said.

According to Wright, the current plan proposes for parallel side paths, but he does not think this design is safe enough for cyclists and pedestrians at Braddock’s busy intersections.

“Enforcement of right-turn-on-red and just general road laws is terrible in this county. People think it’s their given right to turn right on a red light without stopping,” Wright said. “What that means is cyclists and pedestrians trying to cross the road even with a green pedestrian signal are often in danger of motorists who are not looking and pull in at the intersection without stopping.”

Another concern FABB has is the county keeping up with maintenance of the trails. Wright said there are no dedicated funds for this maintenance.

After the survey is closed, there will be a community meeting on June 9 when the consultant Rummel Klepper & Kahl of Fairfax, or RK&K Enginners, will evaluate the survey results and explain the design options and any issues.

“What you would see is a recommended course of action and then that has to go through the formal process of VDOT approval and [Fairfax] County approval or disapproval, depending on what people think,” Cook said.

The planning process will then be finished by May or June of 2015, according to Cook. If the design is approved, construction of Braddock Road will not start for about another six years. The construction would last about 18 months. This six-year gap between community input and construction is because making the engineering design, moving utilities such as lights, poles and wires, and finalizing funding takes years and there could be some delays. Cook said the majority of the funding for these projects would most likely come from local funding. Also an environmental analysis, such as potential tree loss due to the roadway expansion, would probably be needed.

Another construction project with a closer start date Cook mentioned is intersection improvements starting this spring at Braddock Road and Route 123. Fourth Estate reached out to the Braddock District office to ask more about this project, but they have not yet commented.