This story was originally published in the Nov. 10 issue of Fourth Estate.

The Center for World Religions, Diplomacy and Conflict Resolution is organizing a weeklong course this spring that will allow students to interact with Syrian refugees.

Michelle Everson, assistant manager for Research and Operations at CRDC says that the purpose of the trip is for students of all levels to learn about the complexities of the Syrian crisis from the perspective of refugees, civilians and activists who have experienced it firsthand.

“One of the things you struggle with is the theory versus practice, and the trip really promotes the practical side of conflict resolution,” said Nousha Kabawat, the Syria Program Officer for the CRDC. “It gives students the experience to know what it is really like working in the field—it is stressful but it is also very rewarding.”

The Syrian civil war is now entering its third year and the human rights violations have received much attention after Syrian President Bashar al Assad’s use of chemical weapons 2013 killed anywhere from 300-2,000 people, mainly civilians. However, both government and opposition forces are known to use extreme violence against Syrian civilians, and the practices of torture, execution and kidnapping are not uncommon, forcing many Syrians to flee their homes.

According to some aid agencies, this has resulted in one of the worst humanitarian crises in recent history. 9 million civilians have been displaced as a result of such widespread violence, resulting in more than 3 million registered refugees, half of whom are children. Almost 900,000 of these refugees have relocated to Turkey, where the CRDC program takes place. 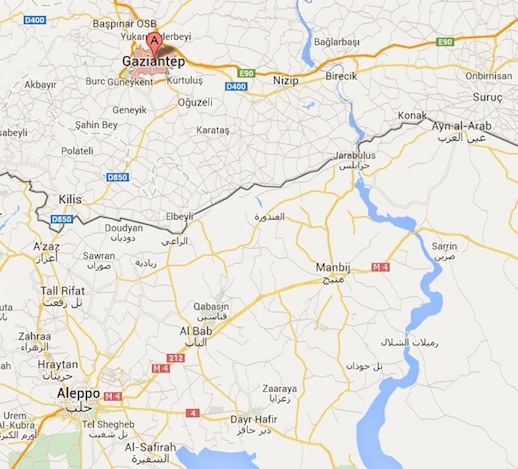 Gaziantep, one of the Turkish cities students will be working in. To the right on the Syrian side is Ayn al-Arab, also known as Kobani, a Kurdish city which has been besieged by ISIS.

However, Everson says the threat of evacuation is not a concern.

“If the trip were unsafe Mason would not allow us to have it,” Everson said. “The safety of our students is certainly something that we monitor and something that students are aware of. The staff are there and we have a really good sense of the situation.”

According to Marc Gopin, director of the CRDC, the CRDC works with non-governmental organizations and representatives from both the American and Syrian government to determine and assess the safety and security of each location that students travel to and is ready to change the itinerary if needed.

The program is run in partnership with Project Amal ou Salam, an NGO originally started by Kabawat in July 2013 that engages Syrian refugee children in daylong workshops. In order to help them overcome the difficulties of leaving their homes and relocating to a new country, the children learn about trust and unity through different mediums such as art and games.

“Project Amal ou Salam is a grassroots organization that works with Syrian refugee children to help them cope with the trauma they have sustained and give them a chance to have fun and just be kids again,” Everson said.

Kabawat decided to start this organization after she participated in the CRDC’s program in March 2013, and since then it has raised around $50,000 for schools in and around Syria.

“The idea of the project came after the lack of education that the refugees actually have. Focusing on the children gave me a new perspective on the conflict—eases my mind knowing that the future leaders of Syria have been touched by this program,” Kabawat said.

Aside from engaging with refugees, students will also attend daily lectures about nonviolent protests, activist work, injustice and conflict resolution in Syria taught by Gopin and Hind Kabawat, the senior program officer for Syria at the United States Institute of Peace. Students also have a chance to converse with and hear the stories of many different actors involved in the crisis, such as representatives from the Syrian regime, the opposition parties and even former political prisoners.

“You have some of the most devastating conversations with these people,” said Megan O’Dwyer, a Mason senior who participated in the program in August 2014, who also mentioned that the emotional aspect of the trip was not something she was expecting. ”It is the worst thing that you could imagine someone doing to another person and it is happening and it is not even something that people will listen to. People never hear about it, Americans never hear about it, and the international community never hears about it.”

Students also benefit from the flexibility of the program, which, according to Everson, can make for some very exciting changes. After a previously arranged event fell through in the August 2014 trip, students had the unique opportunity to speak with Hadi al-Bahra, President of the National Coalition for Syrian Revolutionary and Opposition Forces. Although the flights, hotel and meals are all guaranteed, but the scheduled plan of events can be fluid.

“You learn to be generally responsive to the flexibility and to the different culture,” said Becky Castellucci who participated in the program in March of 2013.

Arabic skills are not necessary for participants, but the CRDC does offer a voluntary six-week crash course in Arabic focused on working with refugees before the program.

Despite the preparation before the trip, O’Dwyer said that once the program started in Turkey, students were able to fully immerse themselves in the work they did with the refugee children, which was very rewarding.

“A lot of these kids are orphans who have burns all over their bodies; they are disfigured and traumatized,” O’Dwyer said. “It is heartbreaking, but you give them a smile and they give back the energy. Kids with burns and scars were having fun and they loved it.”

Expressions of the Holocaust: Storytellers