To the disappointment of many students, the opening of Panera Bread, the newest addition to the Johnson Center, has been postponed.

“At this time it is anticipated that Panera will start training January 5th and open in time for spring semester,” said Mark Kraner, executive director of campus retail operations.

Kraner explained that the contractor working on Panera did not meet the schedule, but students can expect to order their soups, salads and sandwiches upon returning from the holiday break. However the campus Panera store is a corporate company so Kraner says they have not indicated that it will be different from any other location.

This leaves many students angry, even if Panera Bread would not have been their first choice for dining.

“I’m tired of waiting for dining,” explained Tyler Resh, a sophomore studying communication. “With all the struggles of the Ike’s, Pilot House and Southside fiasco, I just want the dining department to get their act together.” 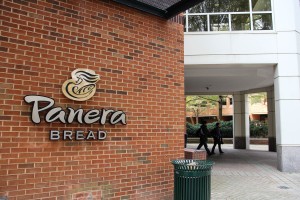 Signage on the outside of the Johnson Center for the new Panera Bread location Photo Credit: Erika Eisenacher

As construction for the new bistro continues to move along, La Patisserie (La Pat) will remain open. La Pat will close shortly before the opening of Panera Bread and that space will be converted to a Mexican-style concept in the future. The Mexican dining area will be short term, according to Kraner, until summer 2016 when the west side of the JC is remodeled.

“I was actually looking forward to it opening in November,” said Nina Teise, a freshman forensic science major. “It would be another place to eat and get good food outside of the dining halls.”

Panera topped the list of student requests several years ago when the planning for retail renovations commenced, Kraner noted. It will be the company’s first “inward facing” store where the majority of business is from the campus rather than the public. Kraner says other Panera locations on college campuses are typically more urban and exterior to attract outside business. The location will not accept meal plans but will take Freedom Funds, Bonus, and Mason Money.

Even though there are frustrations over the delay, some students say that it will not change their decision to visit Panera when it opens in January.

“I won’t go there for a while because it’s going to be really busy, but once the hype calms down I’ll probably go with friends and do homework like I used to at home,” said Monica Barton, a freshman criminology major. “It’s still annoying that the construction is taking longer than it was supposed to, though overall I’m excited to have a Panera Bread on campus.”

How Mason students use RateMyProfessors.com