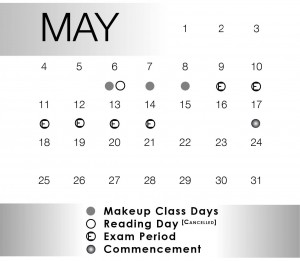 On March 17, classes were cancelled due to winter weather for the fifth time this year. The number of missed days has resulted in an elimination of a reading day, and a shortening of each exam’s duration.

A reading period is usually the week before finals begin during which no classes are held in order to allow students extra time to study for their final exams. However, at the end of this semester, classes will be held until Thursday, May 8 and final exams will begin the following day.

Exam length has also been shortened by approximately one hour as an additional result of the cancelled days. Spring commencement, taking place on May 17, will occur as scheduled.

Todd Rose, associate dean of University Life, said the changes have created some challenges for faculty as well as students. According to Rose, in order to adjust to the scheduling changes, professors now need to focus on class objectives and eliminate any extraneous material from their courses.

“What I think a faculty member is going to be challenged to do is think of very specifically what [they are] trying to achieve in the class,” Rose said. “How do I best achieve those learning goals based on what I’m trying to get somebody to do?”

In addition to his University Life position, Rose teaches a graduate class that meets on Mondays once a week. Three of the five cancelled days have been Mondays, and two of those days occuring before and after spring break resulted in Rose’s class not meeting for almost a month. Rose said that when many consecutive classes are missed, “the learning is very different.”

Some commuter students have also had to make additional arrangements due to extra days missed from school. Freshmen Alexis Jenkins missed scheduled school days because conditions near her house were not safe.

“I ended up just not coming because I couldn’t even get out of my neighborhood,” Jenkins said. “I was like, I’m not going to risk anything to come to class – that’s just ridiculous. I came to class the next time and told my professors that I wasn’t able to make it and they understood.”

According to the National Weather Service, the Dulles area has received 52.8 inches of snow this season. That number does not directly apply to the amount of snow that fell on campus, but a staff member at the NWS said it can be used as an estimate for Fairfax County. The amount of snow during the winter of 2009-2010, nicknamed “Snowmaggedon,” was 73.2 inches.

Even though this winter might have seen less snowfall than “Snowmaggedon,” some snowfall records were broken this season. So far this month, the Dulles area has received 19.6 inches of snow. The original March record was 15.5 inches in 1993. Rose thinks this prolonged winter has made people ready for a change.

“I think people are just kind of ready for the spring weather to come in and just signify that it’s spring,” Rose said. “It’s time to move on with our lives.”

Z’s Blog: Why I love art

Fifteen minutes of fame: A look behind the scenes of Greek Sing