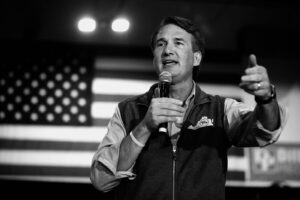 Saying “here we are again” no longer makes sense. This is no longer a cycle of mass shootings. Instead, we live in a constant state where not a day will go by without a community being affected by gun violence.

28 shootings have resulted in four or more deaths this year out of over 600 that can be considered a mass shooting. Recent killings at the University of Virginia in Charlottesville and a Walmart in Chesapeake have left nine dead and others injured. To say our nation and specifically our commonwealth is in mourning would be an understatement.

It has become typical for leaders who do not support gun reform measures to avoid offering little more than condolences and their thoughts and prayers. A pivot is usually made by the same leaders to put the blame on the mental health crisis our country is experiencing. Governor Younkin’s statements on the shooting in Chesapeake were no deviation from this norm.

He gave condolences and noted this as a time to “reflect on the state of mind in America and Virginia”, as he shifted to discussing our mental health crisis. It is worth noting the Governor is unlikely to back any new gun measures in Virginia and avoided using language related to guns when discussing the shootings.

Leaders who do not want to implement new gun measures are using mental health to deflect attention from the fact that our country will continue to experience these tragedies if we do not strengthen gun regulations.

Shootings have become a uniquely American problem, and many of those with power, including our Governor, will do whatever they can to deflect attention away from gun violence and keep reform from being implemented. Youngkin and others who cite mental health as the root issue fail to think critically about what that means, or instead hope the constituents they represent will fail to assess their statements.

Yes, we have a mental health crisis that cannot be denied. But referring to this after instances of gun violence is an anti-solution. It is nothing more than stating the obvious and quietly admitting that they do not offer any solutions that could prevent further gun violence. Everyone should feel insulted when we are given a mental health lecture after a tragic shooting.

Do those against gun reform take a step back and think about what contributes to poor mental health? Perhaps it deals with the very issue you fail to act on. Maybe, just maybe, hundreds of children dying in their classrooms have inflicted fear in our youngest. Do you think it is possible that Sandy Hook, Parkland, Uvalde and other horrific shootings have left an entire generation desensitized, depressed, and scarred?

One of the worst contributions to poor mental health in our country, especially among our youngest, is surely the repeated witnessing of horrific killings in our streets, grocery stores, places of worship, entertainment centers, and especially our schools. If you combine the destruction that has been seen with decades of deflecting and inaction, then it is no surprise that these tragedies have become constant.

It is hard to be more tone deaf than that.

PATRIOTS WIN THREE IN A ROW AT HOME