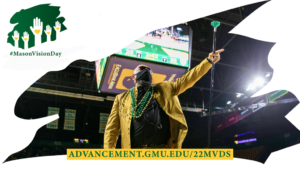 For Mason’s anniversary, a beloved institution gets a gift from the community

As part of Mason’s 50th Anniversary celebrations, the Mason community came together to support one of the university’s most beloved and quintessential organizations, the Green Machine. By 9pm on Thursday, April 7, the Mason Vision Day fund had raised $132,783.05 through a combination of student, alumni, and community donations, with even more donations still filtering in.

The Green Machine is Mason’s nationally-recognized pep band, and encompasses multiple ensembles for different types of performance, including a drum line and a color guard. According to the organization’s website, it was established in 2006 after the Men’s basketball team went to the NCAA’s Final Four competition.

Since then, the Green Machine has grown; the band stands out for its high-energy, imaginative performances that go beyond what you might expect from a typical pep band. In 2015, the NCAA named it “The Best Pep Band in College Basketball”.

To celebrate the initiative and bolster the fundraising, the JC Bistro was host to “Club Green Gold,” where members of the Green Machine performed for both a live audience and for viewers at home who could tune in via a livestream. There, Dr. Michael Nickens (more commonly known as Doc Nix), the director of the Green Machine, addressed the crowd to emphasize the importance of donations and the value that the Green Machine can bring to the university.

“What we are here doing is setting ourselves up for the future. The best thing we’ve been able to do is demonstrate what music can do in a community, what it can do to express who we are, discover who we are, try to bet who we’re going to be,” Doc Nix said.

He continued on to explain what the money will be going towards, saying that the funds will be used so that they can buy instruments when needed, repair instruments, fund the transportation that Green Machine needs to get to games, and expressed that a goal of his is to one day have a designated rehearsal space for the Green Machine.

“If you can dig deep and put any kind of token in … that sacrifice from you will pay off because what we’re trying to do is gather that energy so that we can turn it right back around and hand you something that you would’ve never seen coming, because we’re making it from our raw creativity, and we want you to feel like you’re part of it, that you have ownership over it,” Nix continued.

Throughout the night, a group of student performers kept the music going with a range of genres, highlighting the band’s talents on an array of instruments as well as with vocals.

The crowdfunding efforts weren’t limited to just that event; throughout the day, students set up booths in the JC to spread the word about Mason Vision Day and encourage people to donate. There was even a Vision Day booth at Mason’s campus in Korea, where they tweeted about their excitement to be celebrating the day.

The Mason Vision Day website has additional information about the fund, including a map that shows which states donations have been received from, and an up-to-date count of how much money has been raised. Donations to the Mason Vision Day fund can still be made on the website.