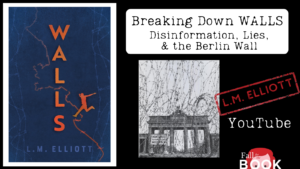 Photo Courtesy of Fall for the Book

A book talk with a timely message on misinformation

Fall for the Book, Mason’s annual literary festival, has just released a virtual discussion with author L.M. Elliot on her novel WALLS, containing a timely message about the dangers of propaganda and misinformation in times of political strife. The digital event, available now on YouTube, was originally intended to be released on March 31, but organizers for Fall for the Book decided to release the event ahead of schedule in light of the Feb. 24 Russian invasion of Ukraine.

“With the invasion of Ukraine last week, it seemed essential to have these conversations now. L.M. Elliott’s talk, and her book WALLS, really look at how propaganda and disinformation are used to distort facts, to justify wars, or to protect the political power of the people controlling the message,” said Kara Oakleaf, the director of Fall for the Book.

This book, “WALLS,” takes place in the year leading up to the sudden raising of the Berlin wall, centering on two cousins who live on either side of a divided Berlin as they navigate the political climate which defines their lives. As Elliott explained in her discussion of the book, the Berlin wall was quite literally raised overnight, without any warning – a feat that was possible largely due to a consistent campaign of propaganda and misinformation in East Berlin that kept residents from forming oppositional opinions.

“It’s about being able to think through the disinformation, propaganda, and conspiracy theories that are out there. We have the ability to sort through what’s factual and what is propaganda, not just have beliefs but really think through them based on facts,” Oakleaf said.

Elliott’s talk began with an overview of the conflict at the time period, before she dove into an explanation about the dangers of propaganda. To point out the ways that information can be skewed, she encouraged the audience to play a game of sorts, where she read passages from the time period which painted non-Soviet influences as corrupt and dangerous, before she explained the reality of the political situation at the time.

Though the discussion seemed to be geared towards a younger audience, the message in Elliott’s discussion and in the book as a whole is one that audiences of all ages can benefit from: “One of the greatest weapons against propaganda [and] misinformation is logic,” she said.

For more from L.M. Elliott, her most recent novel “Louisa June and the Nazis in the Waves,” is set to be released on March 22, and will center on a young female protagonist coping with the sudden presence of WWII on the American home front.

For the remainder of the semester, Fall for the Book has a lineup of additional events, including a conversation with Amor Towles, author of “The Lincoln Highway,” on April 14.

A LOOK INTO POTENTIAL CHANGES TO MASON CORE