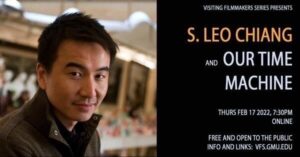 Students got the chance to learn about the intricacies of making a documentary from the expertise of filmmaker S. Leo Chiang, as he engaged in conversation via Zoom on Thursday, Feb 17. This was the first installment in the spring lineup of guest speakers, organized by the Film and Video Studies (FAVS) program.

“The Visiting Filmmakers Series has been bringing innovative, forward-thinking and innovative filmmakers to campus for about 20 years,” said Cynthia Fuchs, interim director of FAVS.

Chiang is the co-director of a documentary film called “Our Time Machine,” centered around a Chinese artist named Ma Liang (also referred to as Maleonn), whose father – previously a renowned opera director – is beginning to develop Alzheimer’s, while the pair set out to create a play starring life-sized mechanical puppets. The film premiered in 2019, and has since received multiple awards, including the award for “Best Cinematography – Documentary” at the Tribeca Film Festival.

While it is a true story, the film is cinematically compelling and artistic, standing as a prime example of how documentaries can be a platform for beautiful storytelling.

“As a filmmaker, I hope that every film I make, I’m getting better, that I’m evolving,” Chiang said. “And I feel like – and friends have told me – that with this film, my work took a big step forward.”

Joining him for the evening was his friend and fellow filmmaker, Laura Nix, a writer and director whose work includes the short film, “Walk Run Cha-Cha,” and the feature documentary, “Inventing Tomorrow.”

Together, the pair discussed the challenges and victories that come with the process of creating a film from the first musings of an idea, through the filming and editing process, all the way to post-production and editing. Some of those concepts were universal to the craft of creating films, while other parts were very focused on the specific art of creating a documentary that can be story-driven and artistically compelling without compromising the reality of the story.

For one, they discussed the complexities that come with filming personal details of people’s lives.

“Most people, when you say ‘hey, I’d like to make a documentary about you,’ they have no idea how much we film. We’re not like a news crew, we don’t just show up once and interview someone, shoot a little B-roll and we’re on our way,” Nix explained. “There’s times, some of these films we’re showing up for years on end, coming back and filming over and over and over.”

This film in particular, dealing with Maleonn’s father’s Alzheimers, required an additional level of sensitivity and care when it came to telling the story, in order to show the gravity and emotion of the situation while maintaining the family’s privacy. Chiang discussed the ethical dilemmas he faced, navigating the process of filming while still making sure he respected the subject and did not overstep boundaries.

A big part of that, as the two filmmakers made note of, comes in the post-production process.

“There’s lots of things you can do in the edit to make sure you’re still preserving the dignity of that character,” Nix said.

With that came another piece of advice from Chiang: the filmmaker said that he always tries to film as much as possible, and then find the true shape of the story in the editing process.

At the end of the evening, attendees were given the chance to ask questions and engage with the filmmaker.

The Visiting Filmmakers Series will have two more installments this semester, with Theo Anthony and Peter Kimball.