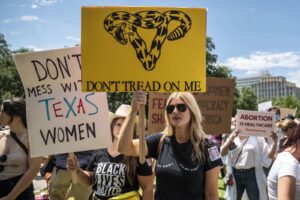 A look into the struggles women in Texas are currently facing

Texas’ recent abortion restrictions went into effect on Sept. 1, but the fight to re-instate the right to abortion is still being fought on the ground. The Biden administration is working toward banning the new abortion law in Texas, and multiple lawsuits are still in progress.

This new abortion law impacts every human with a uterus including females, trans men, non-binary people and more. This shows that this law aims to control a choice of bodily function that we as humans have a right to. A right that is now being actively challenged by people who don’t have a uterus.

People don’t understand that this law has zero clauses for rape or incest, so now this law is not only taking away our rights, but also allowing for more crime and harvesting a rape culture.

Under the new Texas law, people have to know their menstrual cycle very well — which as a woman I know is nearly impossible to do. Even with all the period tracking apps out there and the birth control methods, such as the pill, that are meant to help you predict your cycle, it’s still nearly impossible.

In the words of human rights advocate and real estate agent Ashly Kirkland, “To put this into perspective, you can be up to 10 days late in your menstrual cycle and still be considered to have a normal menstruation cycle. So it’s beyond unreasonable to think a mere 14 days late would be the cutoff timing for this ban … When’s the last time you were able to book a doctor’s appointment within 4 days of a major medically related surprise?!”

After looking through the entire legislation of the new law I am surprised to see no clause for women who have been sexually assaulted. I understand the frustrations these women have and how their rights are being taken away. It’s upsetting to see that this law silences survivors and offers them no help to cope with their situation.

“I think people that voted for this law are voting based on their religious beliefs … Maybe those women are privileged [and] have never been in a situation where they have to make a decision about an unborn baby that was not planned. Or they have never been raped. Or they don’t care about other women’s lives. I think they are just seeing this situation as a religious matter from a privileged background,” said Comal ISD teacher Luz Antolinez in an interview with Fourth Estate.

Many men held the majority in voting for the law. Only 11 women represented the vote out of 82 people who all voted “yes” in the Texas House vote. I find it oddly ironic how this law is solely on the constraints of women’s bodies, but only allows a select amount of women to vote: those who particularly have similar thoughts of their white older male colleagues.

Antolinez made another point about how the Texas government has yet to step in to build  awareness around situations like rape. It is still seen as a “hush-hush” topic, which only further enforces the rape culture.

“I don’t see the Texas government creating centers for young women to get information and help to prevent these situations, or creating school programs where all students about not raping others. This law is just marginalizing poor women of color in their majority to continue to be oppressed by the systematic discrimination against women,” said Antolinez.

Many fellow Texans took to social media in order to engage conversations about these new laws and offer differing points of view for friends and relatives on the issue.

“Look, the fact of the matter is it’s all about bodily autonomy. You could be the only person left on the planet that could save someone’s life with a blood donation and they can’t force you to do something as simple as donating blood. So why would you have to be forced to carry a pregnancy to term and give birth, both of which can be dangerous or life-threatening,” stated Kirkland.

Many believe that this issue is not one of religion or politics but rather one of allowing women to have control of their own bodies and the importance that lies in that decision.

“Whether or not we agree on when a fertilized egg becomes a ‘human life’ is irrelevant. A woman can not be forced to sacrifice her body for another, whether it’s an adult human, a child human, or a clump of cells.  Use of a woman’s uterus to ‘save a life’ or ‘grow a life’ is no different than requiring someone to donate an organ because they’re the only match to save someone else. It’s a woman’s right to have autonomy over her own body, regardless of timelines, or someone else’s personal religious beliefs,” said Kirkland.