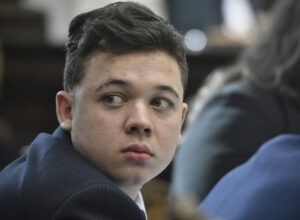 A jury of twelve began deliberations for the criminal trial of Kyle Rittenhouse on Nov. 16. Rittenhouse shot and killed two men and wounded a third on Aug. 25 2020, at a protest following the police shooting of Jacob Blake in Kenosha, Wisconsin.

Rittenhouse faces six counts including homicide charges, according to The Associated Press. The defense claims Rittenhouse intended only to protect businesses from property damage and argues the shootings were in self-defense. Prosecutors say Rittenhouse provoked the encounters by pointing his rifle at demonstrators, AP reports.

The case has gained national attention after video clips from Kenosha went viral. The trial began on Nov. 1.

Senior Jillian Ellis believes the charges against Rittenhouse are appropriate.

“Rittenhouse was mentally prepared to kill someone that night,” Ellis said. “And unfortunately, he had the weapon to do it.”

NPR reported that Rittenhouse, who was 17-years-old at the time, was armed with an AR-15-style rifle.

Second year master’s student Jessica Redmiles said the trial of Rittenhouse and the charges against him are “too little and too late.” They are not optimistic about the outcome of the case.

Graduate student Briana Marcy said she read about the incident last year but hasn’t been following the trial.

“He sure knew exactly what he was doing that night,” Marcy said. “He killed two people, so I hope he goes away for a long time.”

Not everyone agrees Rittenhouse is guilty of the charges against him, though. Fox News host Tucker Carlson has maintained that Rittenhouse acted in self-defense since first reporting on the incident.

In November 2020, Florida state representative Anthony Sabatini tweeted “KYLE RITTENHOUSE FOR CONGRESS,” and POLITICO reported that Rittenhouse even had the support of former President Donald Trump.

“An active shooter isn’t chased by a group of people,” said freshman Kenneth Brown. “That doesn’t make any sense. They would be running from him.”

In videos of the confrontation, Rittenhouse is seen being pursued by protestors. This video was later revealed to be taken after he had already shot one person, according to NPR.

“He didn’t provoke anything. The case has just been politicized,” Brown said.

That the case had become overly politicized was a sentiment shared by freshman Nicole Sobczak.

“It’s crazy. I don’t know what to think,” Sobczak said. “It’s like everyone is telling me what to think about it.”

The New York Times reported that Judge Bruce Schroeder ruled the people shot by Rittenhouse could not be referred to as “victims,” but could be described as “arsonists” or “looters,” prompting criticism from political pundits.

“This case will certainly be one I remember no matter the outcome. It shows how divided our country is currently,” Wilbur said. “Insane that one night can cause so much division and controversy in where our country is going.”

Closing arguments began on Nov. 15 and lasted five hours, according to the Times. Judge Schroeder dismissed the charge of unlawful possession of a firearm shortly after.

The jury deliberated for eight hours on the Nov. 16 before being dismissed for the day.

THE EFFECTS OF FACEBOOK AND MISINFORMATION ON MASON STUDENTS