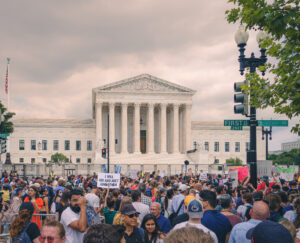 Americans stopped everywhere on June 24 when the Supreme Court made the decision to overturn Roe v. Wade. The court case had legalized abortion in America for the past 49 years, ultimately ruling that “The right of personal privacy includes the abortion decision.” according to Justice Harry A. Blackmun’s majority opinion. Now, abortion rights are to be left up to the states.

According to the Associated Press, thirteen states in America have set up “trigger laws” to automatically restrict abortion as soon as Roe v. Wade was overturned.

Other states have either unannounced their plans for abortion rights, or are seeking to enact abortion restrictions. As of July 14, Virginia is not one of the trigger states, however, Republican Virginia Governor Glenn Youngkin announced that he seeks to ban abortions after 15 weeks of pregnancy following the Supreme Court decision.

In America, women worry that blanket abortion bans may complicate or delay life-saving abortions for ectopic pregnancies, and according to Buzzfeed, women are already being denied prescribed medication such as arthritis pills out of fear that it could be used to cause a hypothetical abortion.

Mason Student Body President Sophia Nguyen released a statement against the decision along with Vice President Celine Apenteng and Chief of Staff Lauren Battey in an Instagram post.

“With the recent decision to overturn Roe vs. Wade, we would like to acknowledge that we understand your pain, frustration, and furiousness.”

“We are extremely disheartened by the news, and believe that Student Government, above all else, should always continue to promote equality and equity for all, and support for our students.”

Students For Life at GMU rejected the statement from the student government in an Instagram post, claiming that groups like themselves and others support the overturn and do not feel represented by their words.

“The statement released on the Mason Student Government social media page ignores and alienates the portion of GMU’s student body that views abortion as an attack on the dignity of the human person. There are several RSOs at Mason that uphold a pro-life view, including Students for Life at Mason, Catholic Campus Ministry, NeW, and others. To publish a statement that disregards these vibrant populations in the GMU campus community is ignorant and arrogant.”

Students For Life at GMU did not respond to requests for comment.

Junior Serena Baaklini spoke about how her family was personally impacted by abortion rights and how she is concerned for her American freedom after immigrating from Lebanon.

“It was so frustrating to have this right stripped from me in a country that I thought was supposed to be ’free for all,” said Baaklini.

“Before America, I lived in a country that didn’t advocate for women that much, so I was used to it. But announcing that abortion was no longer legal and was up to states in this day and age fueled me with rage.”

Baaklini fears for women, their rights, and especially their safety. Baaklini has been personally impacted by abortion rights, as she speaks of a sensitive experience in which her mother had to receive an abortion to save her life.

“I first thought back to my mother, who had a miscarriage of two twins a few years after I was born. She needed an abortion to be able to take them out as they were late term. Without that abortion, my mom could be dead right now.”

Baaklini says abortion is a right to fight for and thought about her sister, as well as other women.

“I do support abortion because I believe that the only person responsible for a woman’s body is the woman of said body. No one is allowed to force us to have children. I think about my sister…I think about the young girls our age with hopes and dreams of making it big only to be torn down by an unplanned child, and a future they can no longer reach. The decision of four men and one woman has ruined the lives of millions,”

“Women all around America will fight to get what they want, and I’m sure this ban won’t stop abortions from happening.”

“My body, my choice. Your body, your choice.”

Sophomore Kristen Tran spoke on Roe v. Wade decision from an LGBTQ+ student perspective and worries about how their rights may be impacted.

Tran spoke about Supreme Court Justice Clarence Thomas, who recently called for the revisiting of cases like Obergefell v. Hodges, Griswold v. Connecticut, and more which protect the rights of same-sex marriage and the use of birth control.

“Supreme Court Justice Clarence Thomas calling for other major rulings to be revisited angers me so much, as these justices are forcing their beliefs onto others and ruining what these marginalized groups have worked so hard to achieve.”

Other demographics will have consequences from the decision and figures like Justice Thomas according to Tran.

“As an LGBTQ+ student, I definitely feel affected by this decision,” said Tran.

“I feel that LGBTQ+ rights and any other rights will be directly affected by this recent overturn. Many people don’t realize that Roe v. Wade isn’t just about abortions. Protections for contraceptives, medical privacy, and discrimination against queer people who want to reproduce children are also affected by this as they fall under Roe v. Wade. Many marginalized groups like trans men, nonbinary folks, and intersex people are targeted as well.”

Mason students and Americans are waiting to see what rights might change next.

STUDENT BODY PRESIDENT AND VICE PRESIDENT LOOK AHEAD TO THE YEAR