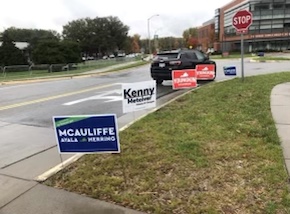 A brief overview of the major candidates in the 2021 Virginia gubernatorial election and their platforms.

The Virginia gubernatorial race has become a close contest. Republican candidate Glenn Youngkin and Democratic candidate Terry McAuliffe are closely tied in their attempt to replace incumbent Ralph Northam, who is ineligible to run for reelection due to term limits.

According to his campaign website, Youngkin is new to politics, with no prior experience in elected office. After earning a masters of Business Administration from Harvard Business School in 1994, he spent 25 years working for the global investment firm The Carlyle Group. He worked up the ranks to become the company’s co-president and co-chief operating officer.

Shortly after retiring from the firm, Youngkin announced his interest in the Republican Party’s nomination for governor of Virginia, according to the Richmond Times-Dispatch. With an endorsement from Texas Senator Ted Cruz, Youngkin took the lead over six other candidates to become the official nominee on May 10, according to the New York Times.

According to Forbes, Youngkin used the fortune he amassed from his time with The Carlyle Group to fund his own campaign.

Youngkin has taken a stance on many cultural issues, such as opposing abortion and limiting gun legislation, according to the Washington Post. However, he made parental discontent with public education the centerpiece of his campaign.

To that end, Youngkin has spoken out against the teaching of critical race theory in schools and has been critical of mask and vaccine mandates for students, NBC News reports. He held a “parents matter” rally in Culpeper and added a tab about the movement to his website.

Since the beginning of his campaign, it appears as though Youngkin has attempted to distance himself from former President Donald Trump without alienating himself from Trump’s supporters and independent voters, according to the Associated Press. Although Youngkin has received Trump’s endorsement, he recently skipped a campaign rally that featured appearances from Trump and former White House advisor Steven Bannon.

Unlike Youngkin, McAuliffe is a veteran in the political arena. Besides having already served as Virginia’s governor from 2014 to 2018, he was also chairman of the Democratic National Committee from 2001 to 2005 and was co-chairman of former President Bill Clinton’s re-election campaign in 1996.

Similar to Youngkin, though, McAuliffe has earned substantial wealth as a businessman, according to the Washington Post. Forbes has reported that while McAuliffe isn’t nearly as wealthy as Youngkin, his donors have much deeper pockets. Much of McAuliffe’s campaign has been funded by billionaires.

McAuliffe has been endorsed by several major Democratic figures, such as President Joe Biden and former President Barack Obama. He has centered his campaign around his previous experiences and successes in office.

In the realm of education, McAuliffe has vetoed two bills that would have allowed parents to ban books containing sexually explicit content from schools. Youngkin attacked McAuliffe for this move in their second debate, prompting McAuliffe to say “I don’t think parents should be telling schools what they should teach.”

Some are viewing the results of this race as a political indicator of what’s to come in the midterm elections next year. McAuliffe’s defeat in a reliably blue state could evoke doubt in Biden’s political authority, according to a CNN analysis.

Aside from Youngkin and McAuliffe, Princess Blanding will also appear in the ballet. According to Ballotpedia, She is a progressive candidate and former teacher, running under the Liberation Party.

Blanding’s brother was fatally shot by a Richmond police officer in 2018. As a result, Blanding has focused her campaign on police reform.

Blanding did not participate in the debates. However, she did interrupt one debate from the audience to claim she wasn’t allowed to participate. “I worked very hard to be on the ballot,” Blanding said. “I should be on the stage.”