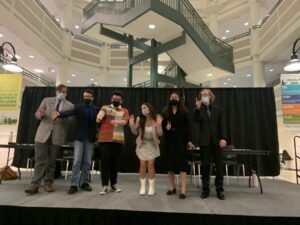 Student Government (SG), in conjunction with Alpha Phi Alpha Fraternity and the NAACP, hosted a debate Nov. 1 between the Democrats at Mason and the College Republicans at GMU, to help inform students at Mason about the issues in this gubernatorial race.

The question topics ranged from jobs and the economy to immigration. With the Dems representing former Gov. Terry McAuliffe and the Republicans representing Glenn Youngkin, each group had to explain their candidate’s platform or stance on the issues raised.

After a brief hiatus during the middle of the debate, the Mason Republicans were given the chance to provide opening statements for questions which they had originally not been given the chance.

Sophomore Celine Apenteng, chair of the Government and Community Relations Committee for SG, said that this was an error made by debate moderators.

“At some point, the moderator had not been delegating the right amount of time to each team. So we went back and … for each section where they did not get an opening statement, we gave them two minutes,” Apenteng explained.

She noted that the debate moved forward after they were given this chance in order to keep the night moving to inform students about the issues at hand, rather than discussing what had already been asked. Despite the brief hitch, Apenteng believed the debate went well.

“[It] gave students a lot of information and helped them learn about the candidates,” she said. “I know I learned a lot today that I had not known about, so I found it very helpful, and I hope other students found it helpful.”

Junior Solomon Fair, moderator of the debate, commented on the situation.

“There seemed to be a clerical error with the strip made where one party felt like they weren’t getting adequate time,” said Fair.

The Republicans felt as though they had a victory in the debate that night. Isabella Cespedes, a debater for the Republicans, said she was “very true with his values and what he’s bringing to Virginia.”

“I would also like to state that very much, like Youngkin, we start everything with prayer,” Cespedes said. “And I definitely believe that we had a victory tonight in the debate and we give that to Jesus.”

The Dems noted that voting for college students in particular is important for this election because governors do affect what happens at universities.

“They appoint the members of the board which govern over George Mason and every decision that the governor makes will affect us as students regardless, of if you live here regardless of if you’re a citizen of Virginia or citizen of a different state,” said sophomore Vincent Buonaspina, a debater for the Dems.

The debaters themselves had various reasons for supporting each candidate, but all stressed the importance of voting.

“I hope everyone has made the decision based on what is important,” said College Republicans chairwoman and debater Brooke Sanderford.