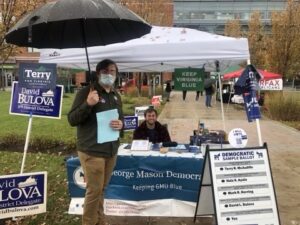 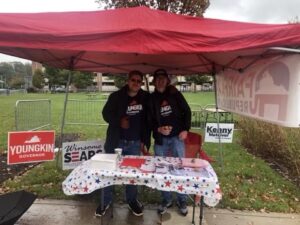 The Virginia governor’s election took place on Nov. 2 as students, faculty and other members of the Mason community watched former Virginia governor and Democratic candidate Terry McAuliffe and Republican candidate Glenn Youngkin race against each other in the polls.

381 Mason students voted Tuesday at Merten Hall. The official results will be certified on Nov. 15, according to the Virginia Department of Elections.

Mason Votes, Student Media’s official election-coverage site, provided many student resources for in-person voting and online voting prior to Election Day. Students registered at their current campus address were encouraged to vote on Mason’s Fairfax campus, and were also encouraged to look up their voter registration on the Virginia State Board of Elections website.

McAuliffe started his career in politics working on the campaign of President Jimmy Carter, according to Mason Votes. McAuliffe’s efforts for his campaign include building a clean energy economy to address climate change and addressing the affordable housing crisis Virginian communities are facing.

Youngkin has participated with several non-profits during his career, including the Virginia Ready Initiative and Virginia Tech’s Innovation Campus Advisory Board, according to Mason Votes. Youngkin’s efforts for his campaign include creating 400,000 jobs and making sure every Virginian student graduates career or college ready.

Student organizations including Democrats at Mason and College Republicans at GMU started canvassing outside of polling locations in the morning in order to encourage people to vote. Both organizations have tied their campaign efforts with the candidates who are running in this year’s election.

“This election is very close. We believe the Democratic ticket has the best vision for Virgina,” said junior Liam Fischer, member of Democrats at Mason.

Junior Joe Szymanski, assistant vice chair of the GMU Republicans, said he is really hoping it was a successful night as the team had given it their best shot.

“I think he [Youngkin] had over 3-4,000 people at his rally last night. We, as Virgina Republicans, have given it our best in the past 12 years” said Szymanski.