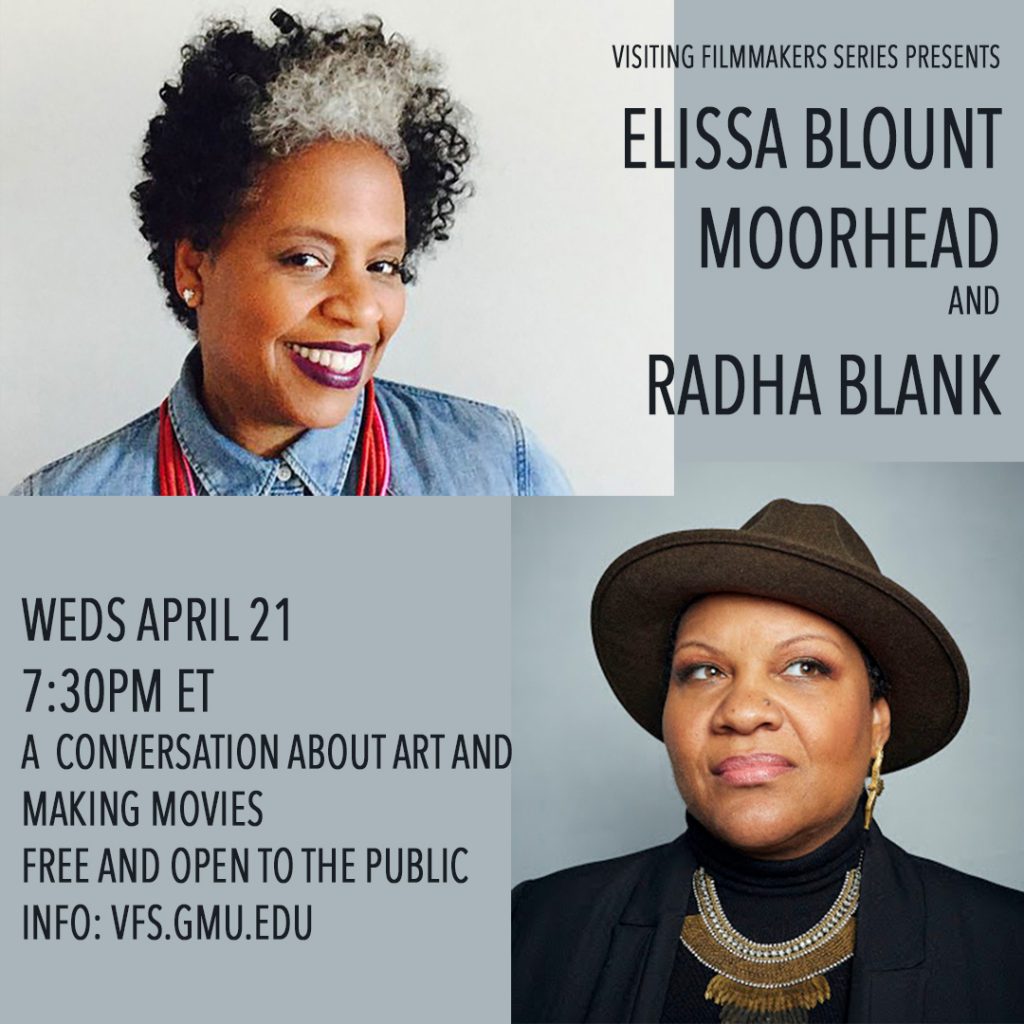 Courtesy of Film at Mason

A lively conversation between filmmakers and friends

The final installment of the Visiting Filmmakers Series of spring 2021 provided a glimpse into the friendship of filmmakers Elissa Blount Moorhead and Radha Blank as they discussed their work in the industry and questions they had for each other.

Elissa Blount Moorhead is an artist who explores what she dubs “the poetics of quotidian Black life” and has helped solidify the importance of everyday personal Black stories being celebrated in film. Blount Moorhead’s work on rapper Jay Z’s “4:44” album and her four-channel film “Back and Song” display her expertise in the art of filmmaking.

“We’ve both been so inspired by projects on television we’ve seen, like the shows ‘High Maintenance,’ ‘Pen15,’ ‘Russian Doll’ — it’s truly amazing. It stimulates my fire,” Blount Moorhead explained, discussing a project she’s working on with her sister.

Radha Blank is a director, writer, performer and New York native. Her recent film “The Forty-Year-Old Version,” for which she was awarded the Vanguard Award at the Sundance Film Festival, was one of the most critically-acclaimed debuts of 2020. Blank’s raw but humbling presence in her work makes her a force to be reckoned with.

“I love it when a storyteller doesn’t try to explain things to you, they just drop it off to you,” Blank said, when explaining the importance behind successful Black stories in filmmaking.

At one point during the virtual session, the two decided to come together in person at Blount Moorhead’s apartment to continue the question and answer portion. It was inspiring to see it become a more personal connection — as expected, COVID-19 regulations were still followed as this exchange was happening. It’s important to note that the two filmmakers live just a couple of blocks away from each other in the city.

The two continued to converse on different music pieces, specifically within the Black music community, that inspired their personalities today and the work they have produced. Albums mentioned included “The Playboy Club,” “Love is Rock,” “Walking in Space” and more. Blount Moorhead noted she was raised by a jazz musician and recommended her favorites to the audience.

“Sundance was such a big deal for me because I went through that Sundance [Screenwriters] Lab process specifically,” Blank said. “It was a culminating event, being in the labs; to build up my project for three years, come back to shoot it, then win Best Director for it was a great experience. I didn’t have those beginnings so I didn’t expect that, but with help from others like Lena Waithe, it really got me there.”

The importance of adding joyful and whimsical emotion to Black films was something that the two filmmakers emphasized during their conversation. “I’m obsessed with musicals. It makes me realize that, hey, we want whimsy too in our films,” Blount Moorhead said, referring to what the Black community — including herself — wants to see from filmmakers.