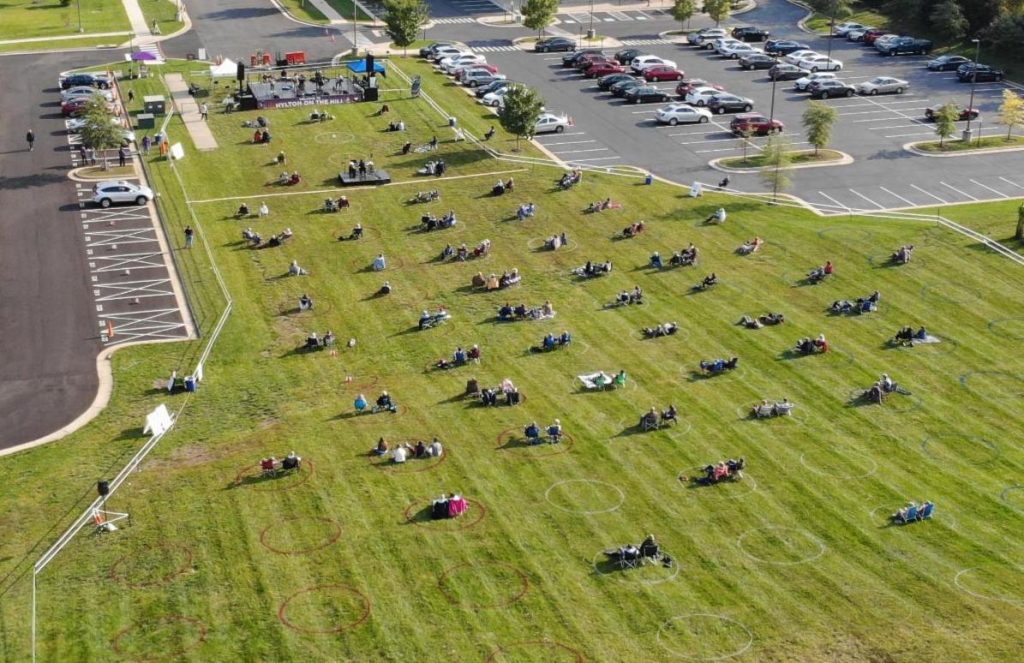 According to the release, “Mason Pond Lawn will feature physically-distanced seating areas and will follow strict safety protocols.” The release also notes that in-person performances will be conducted in conjunction with the virtual programming being run through the Mason Arts at Home initiative, but the in-person performances will not be livestreamed. Additionally, face masks will be required for attendees at both indoor and outdoor in-person events.

In an email written to Fourth Estate, Assistant Director of Marketing and Communications for the Center for the Arts Kirstin Franko wrote, “Patrons will be seated in pods of up to four people, which will be safely distanced across the grass lawn across from the Center for the Arts. Patrons will face towards EagleBank Arena, where there will be a raised stage at the end of the lawn to see the performers.”

“Many of us have done videos and we’ve done them in the larger venues, again, where we can spread out, we can socially distance. There’s no audience, of course. This May 2 performance, I’m super excited about because we’re going to have an audience,” said Darden Purcell, director of Jazz Studies at Mason.

“For the faculty, they’ve been performing in-mask, socially-distanced inside and so my guess is that they’ll probably be doing that outside as well,” she continued.

The Center for Visual and Performing Arts at Mason also announced a trio of in-person student performances that will take place in April.

Concerning the Mason dance programming Franko wrote, “For the indoor performance, we can expect an audience of less than 250 people per performance of Spring New Dances consisting of Mason students, the student choreographers’ guests, School of Dance performers, School of Dance faculty and the general public. The normal Concert Hall capacity is 1,947. This is maintaining well-below the current Virginia indoor performance guidelines of 30 percent of capacity or up to 500 people.”

Concessions from the Center for the Arts will not be available at any of the events, but patrons will be allowed to bring their own food and non-alcoholic beverages to enjoy on Mason Pond Lawn.

Additionally, the Hylton Performing Arts Center, located on the Science and Technology Campus, will be putting on two in-person Mason Opera performances on April 24 and 25.

According to Franko, the Center for the Arts will be sharing the rest of their upcoming plans for the 2020-2021 season in early May.

Culture
Center for the Arts CVPA Events Hylton on the Hill