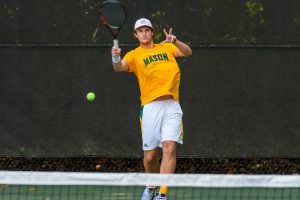 A promise, and a little bit of luck: That’s how senior men’s tennis player Ryan Charles started down the path of pursuing competitive tennis.

As a freshman at Landstown High School in Virginia Beach, Virginia, Charles played basketball and tennis. But after a rough basketball season, he made a bet with his coach.

“If we made regionals in tennis, I wasn’t coming back to play basketball,” Charles said. “We just happened to make it. We were in a tiebreaker. It came down to the flip of a coin, and we ended up getting the regionals spot. So I stuck to my word and I didn’t go back to basketball the next year, and I stuck with tennis for the rest of my high school career.”

It worked out well as Charles became the captain of his tennis team and led them to the Landstown 6A South Regional Championship in 2017.

After hearing about Mason from a strength and conditioning coach, he researched the school and became very interested.

“It seemed to have everything I was looking for,” Charles explained. “That mid-major D-I feel, in state, a good engineering program. It ended up being that perfect spot.”

But Charles’ journey to the Mason men’s tennis team was anything but smooth. He had to make the team as a walk-on.

After consulting with his family and his coaches, he decided to take the risk and go with Mason and try to walk on to the team.

About two months later, he received a boon.

“Right before my state finals in tennis, which happened to be up at Mason, the coach reached out to me and said he would come watch me play,” Charles said.

“When I got to meet him as a person, I saw something special in him,” coach Jimmy Davis said. “Not only is he a bright person, but he is very motivated toward the goals that he sets for himself … I’m really glad I took a risk in telling him he could have a spot on the team. Looking back on it, I would have been dumb if I didn’t.”

Coach Davis added, “He started off with no scholarship. And he came on and he’s working just as hard, if not harder than all these guys on the team, and that says a lot. It helps a coach be able to say this guy wants to be here and wants to improve.”

When looking at ways Charles could help the team, Davis keyed in on an area that was difficult to miss: height.

Charles came up at the perfect time too, as he was able to fill a need.

“The team was a small roster at the time, only about eight or nine guys, so they needed bodies,” Charles said. “I was 6 foot 5 and they didn’t have much of that. I think the next tallest guy was one of my roommates, Jakob Nielsen, and he is about 6 foot 2. I had a really good week at the first week of practice and earned my spot.”

With the height that Charles has, it brings some serious advantages on the court.

“You get the benefit of being a big server and having a lot of space taken up,” Charles said. “My favorite part about it is that most of the time I can control the match, and it’s on my racket. If I’m playing well, there’s not much my opponent can do.” 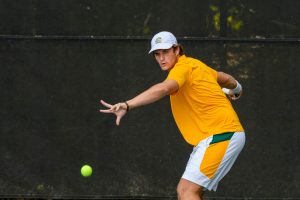 From a coaching perspective, Davis says that height allows a player to do things shorter players simply aren’t able to do.

“The angles you’re able to produce, the effortless power that you’re able to get. Obviously, if you can hit down from a fort on a serve, it adds an advantage,” Davis said.

Charles has played both singles and doubles over his four-year career at Mason. He has tallied 16 wins in singles and 22 wins in doubles, but some of his most impressive results have come this season.

With partner Rithik Sardana in the number one doubles spot for the team, the pair are 4-0 this season with wins over VCU, Temple and Villanova.

But despite his achievements on the court, some of Charles’ most impressive accomplishments have come off of it.

Charles is the Student-Athlete Advisory Council president and is a member of the George Mason Diversity & Inclusion Leadership Council. Additionally, in 2020, Charles was selected as the OrthoVirginia Student Achiever Award winner which recognizes student-athlete accomplishments outside of the playing field.

Speaking on why student-athletes should pursue these opportunities, specifically with SAAC, Charles said, “It’s important to have your voice heard. For me, it was an opportunity to get the tennis voice heard a little bit more. I could get our opinions out there because we’re not the most important sport or the biggest revenue sport.”

All of this experience is helping Charles lead his team this season. As the only senior on the roster, he is setting a great example for his younger teammates.

“You can see an impact from him on everyone,” Davis said. “You can see an impact in the culture of the program itself … Having someone that shows up every day early, who stays late, who aces the classroom, who gets involved in athletics to its core, those young guys see that and believe that’s the culture. And luckily, now it is … I can put a lot of that credit, a majority of that credit, to him.”

As his career comes to a close, Charles’ primary goal is to set the program up for future success.

“Ever since my freshman year, I knew that when my senior year comes, it would be a transition year,” Charles explained. “Of course, I’d like to go out on top and win. But more importantly, I’d like this team to be ready to run it back next year and see if they can do any great things next year.”