If you’re affiliated with Mason in any way (if you so much as breathe the air on campus) you are familiar with the litany of protocols aimed at preventing the spread of COVID-19 on Mason’s watch. Single-seat tables, taped-off couches, an obsession with protecting surfaces, daily “health checks,” and, often, contradictory rules that make campus life a bizarre game of Operation — constantly at risk of getting zapped by the protocol watchdog. 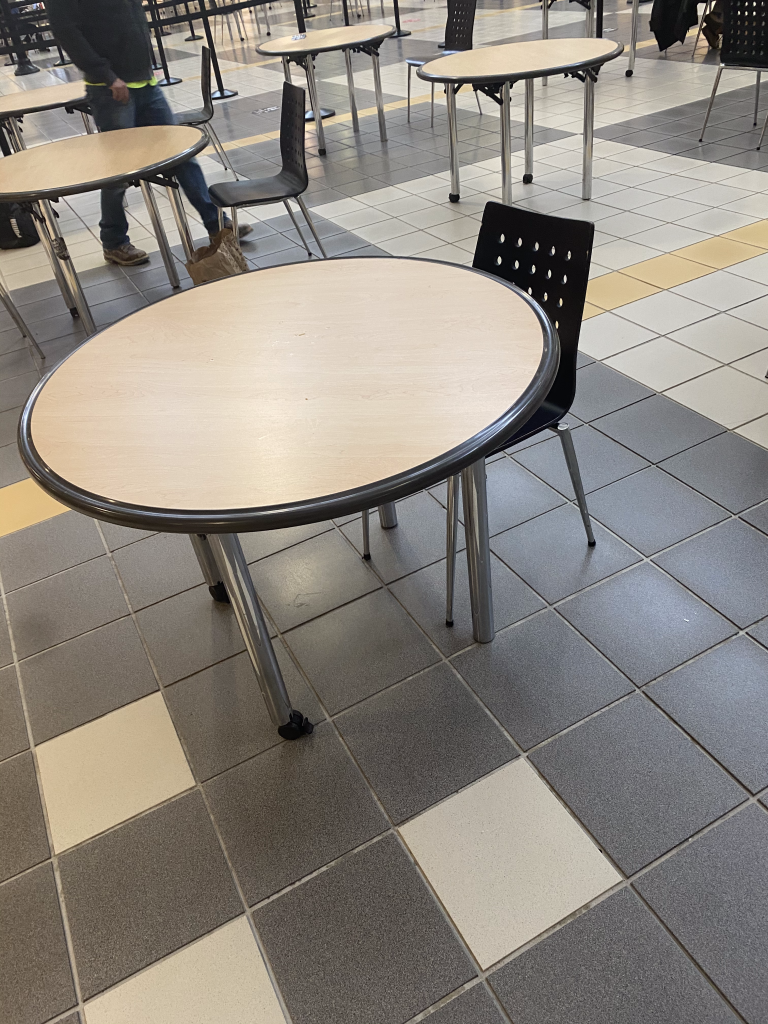 The first thing any on-campus newcomer will notice is the “singleness” of indoor spaces. The bottom floor of the Johnson Center consists of tables with one (1) lonesome chair each. I can’t even attempt to come up with an explanation for this, considering there are tables with multiple chairs where you can sit with friends on the second floor of the same building.

Just next door to the JC is the fresh, clean, brand-new Horizon Hall. On the bottom floor is a huge study space, featuring cushioned chairs, high tables and couches with charging ports! Oh, except it’s all taped off. That’s right: no couches, and if you want to do work, you’re doing it alone, because while multiple seats are present, all but one are blocked off. No matter if you wish to study with a classmate, your roommate, your boyfriend, or someone you live and eat with, Mason’s not having it. 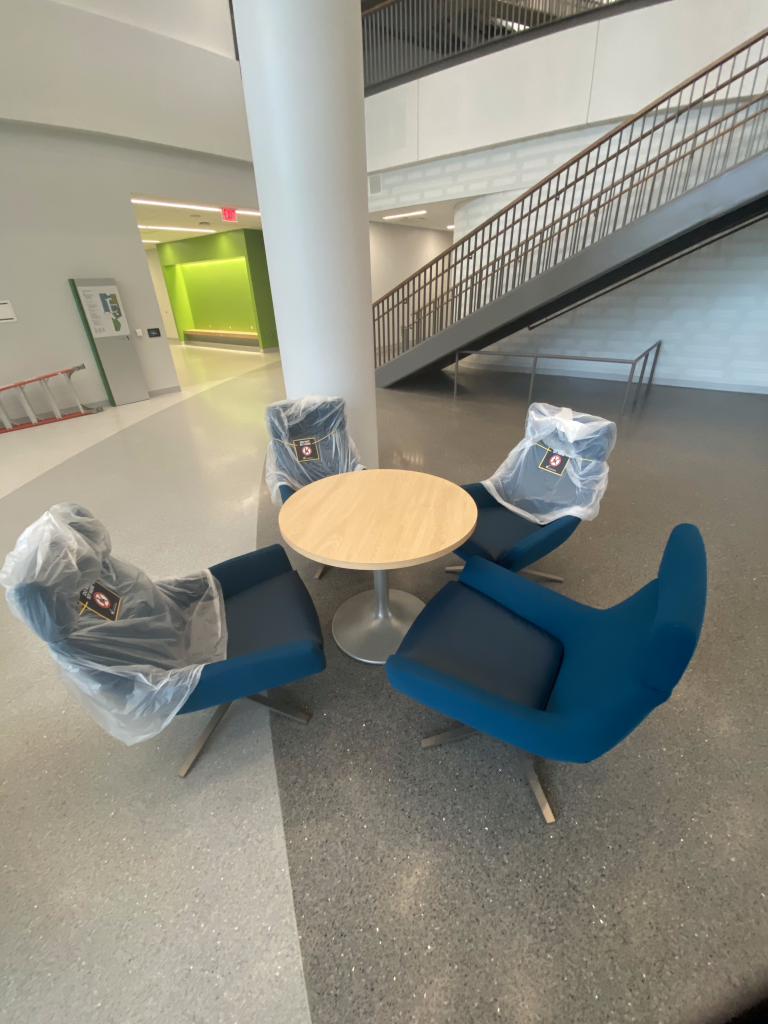 This better-off-alone approach to COVID-19 is most confusingly demonstrated in Peterson Hall, where sad, singular chairs are present in the large main floor, but there are several study rooms where you’re welcome to study with friends. No one considered that letting students pack together in a small, enclosed space seems counterintuitive to the concept of utilizing open air to reduce the risk of passing an airborne virus. As inane as Mason’s better-off-alone approach is, they can’t even be consistent.

This just scratches the surface. Have you ever done the Mason COVID Health Check? If you’ve been on campus at all, most certainly. Nothing better demonstrates Mason’s attempt at feeling more powerful than this virus than its brilliant, endlessly-touted health check.

To briefly describe this marvel of human ingenuity: to enter gyms, dining halls or testing sites on campus, you must show the doorman a green screen saying that you passed your daily check. The check consists of asking things like whether you have COVID-19 symptoms, whether you’ve been on campus, and whether you’ve been tested recently. After telling them what they want to hear, you get a green pass.

What’s so great about the check is that it saves almost all of your answers, so all I have to do every morning is mindlessly press the buttons that aren’t saved and quickly move on with my life, and Mason seems convinced that this right here is the solution to a global pandemic. For the record, if I did have COVID-19 symptoms and wanted to go to the gym, I most certainly wouldn’t say on my health check “I have symptoms,” followed by “Oh darn, I guess I’m not going to the gym.” The health check is about as useful as the TSA asking airline passengers if they’re terrorists. “Why, yes I am. Take me away!”

Speaking of the gym, I have yet to touch on Mason’s most blatantly embarrassing attempt at giving administration the feeling of control — the management of the RAC and AFC, two of Mason’s on-campus gyms. To keep people six feet apart, neither location will allow you to work out with a partner — not even making exceptions if you live with them, if you married them or if you had their child.

You can only work out for an hour at a time, once a day, and you have to make a reservation. If you don’t show up to your reservation more than once, they go as far as to punish you, banning you from working out for a week.

Recently, the RAC reopened its squash courts, but if you planned on getting in some cardio, the only partner you get is yourself. That’s right: Despite holding yoga classes allowing 10 people in a room not much bigger than a squash court, you’re not allowed to play a two-player sport with another player. If that isn’t bad enough, you’re required to wear a mask — alone.

Now, anyone who has stepped foot into either facility knows the breadth of asinine attempts at making its guests “safe,” but to get a better idea of what exactly goes on in rec administration, I spoke with Ana Beasley, a former Mason Recreation employee, about her experience working at both open gyms.

“It’s crazy,” she told me. She said she thought they were more concerned with appearing safe than actually encouraging safety, explaining, “They wouldn’t let roommates work out together and wouldn’t let people use spotters,” which from an exercise perspective is “just not safe.” Administration seems more concerned with protecting the air in the squash courts than they are about preventing serious injury. She ended by saying, “It’s part of the reason I quit.”

It doesn’t take a genius to figure out that many of Mason’s rules are more for show than for the actual safety of the students who pay tens of thousands of dollars to be here. Notwithstanding, Mason has done an excellent job of minimizing the impact of the virus, but that is likely more to do with the fact that Mason — unlike most of its Virginia university neighbors — does not have a heavy party culture than with the fact that you can’t sit with your roommate at the JC.

Just one more of many examples of how Mason administration is more concerned with seeming invested than with being invested.

WHAT EVERYONE GETS WRONG ABOUT CANCEL CULTURE