A digital evening with the first family of banjo 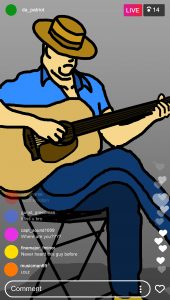 As we stay quarantined in our homes, a plethora of artists spanning several genres and media have decided to carry on providing (usually free) versions of the shows that they are unable to carry out in person. Since March 20, Bela Fleck and Abigail Washburn, who were scheduled to play at the Hylton Performing Arts Center this spring, have been hosting a weekly live concert titled Banjo House Lockdown, advertised on the Mason Arts from Home website.

Bela Fleck is a 15-time Grammy award-winning artist, and Paste Magazine has titled the husband-and-wife banjo duo of Fleck and Washburn as the “the king and queen of the banjo.” Additionally, the duo has appeared on NPR’s popular Tiny Desk series.

Instead of elegant concert attire, Washburn performed in a nightgown and Fleck in an unbuttoned dress shirt with a tee underneath. More than just a musical performance, the duo really allowed viewers to take a behind-the-scenes tour of their life at home. Throughout the livestream, they juggled parenting, dinnertime, camera work and performing.

They opened the set with their series’ theme song, aptly named Banjo House Lockdown, a spirited tune where the two musicians were joined by their eldest son Juno, who made several appearances throughout the show.

The live-at-home setting gives fans a peek into the lives of artists that they might not get in a concert hall or another venue.

Fleck and Washburn appeared in their home surrounded by banjos and the frequent addition of their two young children. The concert successfully transported viewers out from their home and into the family’s living room — a welcome reprieve from quarantined life.

As with most video streams during the outbreak, there was a minor hiccup near the beginning of the concert which Washburn called “the old bump of the old finger on the wrong place on the screen issue.” However, they quickly resolved the issue and the show continued on.

Washburn took the audience to the family bathroom for their Sheroes in the Shower segment where she sang “Pretty Bird,” originally written by the bluegrass singer Hazel Dickens.

During the show, the two plus Juno also paid tribute to John Prine, who recently died from complications associated with COVID-19, by singing his song “Dear Abby.”

“We lost a friend to the music community, the great John Prine, who I’ve known for a long time and we’re both huge fans of,” Fleck said. “So we wanted to do something of John Prine’s tonight.”

The show was cozy, creative, honest and vulnerable. In this particular setting, Fleck and Washburn were really able to connect their music with who they are as people. Washburn’s voice was radiant and warm and the banjo interplay between the two was a joy to hear.

The joviality and warmth that you experience in the music seemingly extends beyond, into the way that the two live and parent.

Live music is a singular experience. We go to concerts in order to challenge our ideas about music and help us discover new musical ideas that we either love or haven’t considered yet. While we can’t see them in person, we’re lucky to still have artists who are choosing to use social media to share their humanity with us all.

Next week, the duo will be back performing on Facebook live on Friday at 7 p.m.