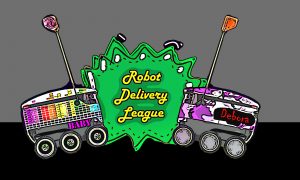 You’ve heard of Quidditch and you’ve heard of Underwater Hockey, but get ready for Mason’s newest sports team: The Starship Robot Delivery League!

This soon to be 2021 Olympic game, Delivery League, involves five rounds of battles and was started by two rival Mason students.

The fastest Starship Robot was clocked at 4 mph. That is, until founder and President of the Delivery League senior Mason George had something to say about it.

“I stood out on the roof of the Hub watching a small robot meander by and I knew then, we could do better,” George said.

That night George masterminded a heist to steal a robot and reprogram it to drive faster.

“I took this baby out for a spin and passed a golf cart on Patriot Circle,” George said. “I hit 26 mph and that was after a single night of modification. After that, the sky was the limit.”

George named his first stolen robots Baby and Debora, after the film “Baby Driver.” Soon George and his friends had a team of half a dozen robots. Late at night, they would race their modified robots in the sports fields on West Campus.

“You might have noticed a week in the beginning of February when deliveries took a little longer than usual,” said George. “This was when we really amped up our acquisition of robots. Starship Technologies had to order a bunch of new robots for the campus to replace the ones we stole.”

Other students also noticed the brief disappearance of several of the robots.

“I noticed whenever I bought food, it was the same little guy visiting me,” co-founder and vice president of the Delivery League Sky Star said. “He had a pink cheetah print slap bracelet wrapped around his orange flag. Then one dark day, he disappeared.”

This robot was Baby, George’s first acquisition. One night, Star was walking back from her car on West Campus and saw Baby racing at unbelievable speeds around the empty sports fields. She watched for an hour before plotting a rescue mission.

Star and friends also started collecting robots. Once they had two dozen, they got their revenge.

“It was incredible,” George said. “A herd of foreign robots with strange markings overtook our race field one night. We stood in shock, and only once they had left did we realize what they were after.”

George used his sources around campus to track down the head of the rival robot gang. He challenged Star and her robots to a duel; the winner got custody of Baby and Debora.

The first race between George and Star involved only the Finale Race. Today the Delivery League, an officially recognized sport at Mason, has five trials contestants can enter.

Each individual contestant can register up to two robots for use in all the games in the League.

Robots can be bought second hand from ex-leaguers or directly from Starship Technology. It is up to the contestants to modify, paint and trick out their robots for the competition.

There are guidelines posted on the Delivery League webpage that include rules for the modification of robots, such as “No attaching or building of projectiles to the robot, including but not limited to, catapults, pepper spray or confetti cannons.” Another rule is that the robot must retain its original body shape and dimensions, wheel count and small flag.

The first race is the Speed Test. Robots built for this race are usually very light and built like race cars.

These robots can reach speeds of 50 mph. Any faster and the little guys have trouble keeping all their wheels on the ground during turns.

The racetrack is a grassy field in West Campus. Robots must travel around the circle five times. Points are awarded for speed and removed if the robots bump into anything, such as a fence post, person or another robot.

A good delivery robot is meant to deliver packages quickly without damage. Therefore, if they bump into anything, they have not completed the job to the best of their ability. The Delivery League is all about finding the ultimate robot and driver pair.

A cup of coffee at 205 degrees Fahrenheit is placed in the robot at the start of the race. Points are lost if this coffee is damaged, spilled or a different temperature by the end of the race.

The second race is the obstacle course. This racetrack travels through the woods, over crosswalks and around pedestrians on sidewalks.

These robots are built to be sturdy in order to travel on rough terrain. A full lunch is placed inside the robot: an entrée, a side dish and a drink to be carried from the start of the course to the end.

The side dish and the entrée are usually different temperatures and points are awarded if the food remains the original temperature from the start of the race to the end. Often multiple compartments are added to separate cold and hot food, but these add weight, making it harder for the robot to travel quickly.

Points are lost from bumping into anything or destroying the food. Points are awarded for completing the track quickly and taking road safety precautions such as pausing to check for cars when crossing the road.

Battle-to-the-Death is split into two components: a demolition derby and a fight ring.

The fight ring tallies no points into the final League scores. Competitors are paired up and fight their robots until one has lost its flag or a wheel or can no longer drive. The winner gets to keep both robots, and the loser is out of a robot.

It is a way to acquire new robots. Some competitors only enter for the fight ring to try and win robots for parts, or to modify and enter the next League competition.

The demolition derby is when sturdy robots are placed in a ring and drive into each other bumper-car style. If a robot loses its flag, the driver must put down the controls. If the robot loses more than two wheels or if the robot has been damaged so much it can no longer drive, it is out of the trial.

The last two robots standing advance to the final round. After three preliminary fights, the last six robots fight in the finale, and the last robot standing is crowned the winner.

Teams of five robots can register for the Relay Race. Relay teams can be made of five people with five different robots or two people using two robots they switch off during each leg of the race.

There are five legs to the race. The first robot is given a package to carry once around the speed race ring. Pedestrians are released to walk haphazardly on the track that the robots must avoid.

Once a lap has been completed, the next robot is at the start line and the package is switched from the first robot into the second robot to drive the next lap. This occurs for five laps.

Points are lost if the robots bang into anything. The package is also switched to a different robot for each lap of the race, and if the package is damaged at all in the transfer, the fastest team wins.

These points are not factored into each individual’s ranks in the League individual leaderboard.

The grand finale. The original race. Robots must travel the fastest through a course, much like the obstacle course, but robots can bang into each other and run one another off the road in a “Mad Max”-style race to the death.

In this no-rules wasteland, this is the most popular race that people train all semester for. People attach retractable spikes to their robots’ wheels, and as long as you aren’t caught, all bets are off for the building of these robots.

There have been more than a few incidents with confetti cannons exploding sticky confetti to obscure the cameras of the other robots.

One time, a very small toddler was hidden in the back of a Finale Race robot. After an EMP was set off, the toddler proceeded to run the race while all the other robots struggled to get their remote drivers back online.

The race is fast, intense and unforgiving, but the reward of being crowned the Grand Finale winner is worth it for most people.

Each trial has a winner declared, and then the individuals are ranked on a leaderboard. There are gold, silver and bronze medals for the overall winners.

“I’m excited for the next League race, whenever that may be,” Star said. “Although the competition scheduled for May has been postponed because of the coronavirus, I’m optimistic it will be rescheduled this summer.”

In the meantime, Star is spending time pampering her prized robot Baby, a five-time champion, making sure he is in top condition to race against Debora and George, six-time champions and Baby and Star’s top rival.

In Times of Crisis, It’s Sports To The Rescue