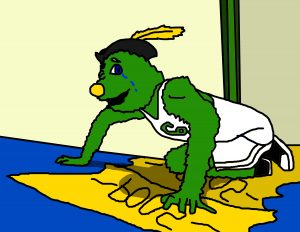 On March 13, Mason Police received a report that a green fuzzy animal had emerged from EagleBank Arena’s gold room.

According to security camera footage, the mascot was hiding behind the curtains and crawled out from the area, then immediately ran to look at the rafters of EagleBank Arena.

Gunston looked horrified. After being cooped up in the Gold Room for 11 years, he saw only one NCAA banner from the 2011 season.

With absolutely no one on campus due to spring break and a global pandemic, Gunston needed to know what had happened.

His cell phone plan had expired, as that’s what happens when you don’t pay it for 11 years. So he knew he had one last place to look. Gunston made his way to court level and found the Mason record book compiled by Sports Information Director and superhero Mark LaFrance.

He knew changes were coming when they replaced him as the mascot, but nothing this drastic.

Gunston quickly ran outside to see what else had changed, to the tune of Benny Hill’s “Yakety Sax.”

He saw the JC, Hub, all these new buildings, all new to Gunston.

He ran to all the new dorms, the dining halls and the RAC.

Mason Police caught sight of the green fuzzy mascot and pursued him, again to the music of Benny Hill.

They chased him around the CFA, Mason Pond and Lot K before Gunston made it back inside EagleBank Arena.

He quickly ran back to the Gold Room, never to be seen again.

Gunston may return during the next pandemic, after 11 more years, only to find out what happened to his favorite basketball team that went to the Final Four so many years ago.

I don’t know when Gunston will be back.

But I do know that you can sign this petition to bring him back.