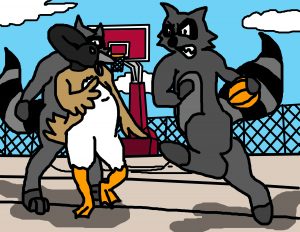 It’s all the rage

A crowd of 150 students — all sitting 12 seats apart from one another to practice CDC-recommended social distancing — cheer louder than any coaches’ long-lasting memory can recall. But what are they cheering for?

Geese-kit-ball, which started out as a last-ditch chance for Mason to generate some revenue during the extended spring break earlier this month, quickly became a regional phenomenon in Northern Virginia.

“So what happened was, I was walking around campus, selling loose squares of toilet paper to scared freshmen when I was approached by Mason Athletics,” stated sophomore philosophy student Jack Harvey.

Harvey continued, “Coach Allegra — you know, the guy who took Mason basketball to the final four like one hundred years ago, came up to me and gave me $50 to catch as much wildlife as possible.”

From there, Harvey began leading geese from Mason pond over to EagleBank Arena.

“So geese are pack animals, you know what I’m saying?” Harvey continued, lighting a cigarette while he spoke. “They won’t turn on one another, but surprisingly, they’re pretty groovy at basketball.”

“It was the darndest thing,” Coach Allegra, of the newly established Gunston Geese, stated. “I honestly can’t think of why we never considered it before. It shocked us all, because of their webbed feet and, well, wings.”

Allegra continued, “And that one kid, Jack, just keeps scrounging around in the dumpster by Panera, so we asked him to keep a lookout for some other kinds of animals. Forty-five minutes later he comes back with like 10 raccoons. How does he do it? I have no idea.”

Harvey later explained that all you need is a sandwich, and the raccoons will pretty much do whatever you want.

The raccoons did not take to basketball as well as the geese, but they have the advantage of tiny hands, which has given them an extra edge that makes the game very competitive.

“So, it’s traditional basketball rules,” Allegra explained. “Ironically, they took to it faster than most of the guys from the men’s team I’ve worked with.”

Mason’s Interim President Anne Holton agreed. “We didn’t anticipate the animals to be this good at a man-made athletic contest. It was honestly just a last-minute scam to make money, but the students have really taken to it.”

However, off the court, the raccoons have looted their nests every night at Mason Pond in an effort to diminish morale among the geese.