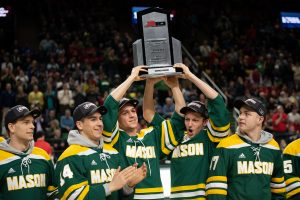 When establishing a winning culture, a full team-centered buy-in is key to that approach. Under the guidance of head coach Peter Ward, the men’s swim and dive team secured its first Atlantic 10 Conference Championship in school history at the Spire Aquatics Center in Geneva, Ohio.

“At the beginning of the year it was known we were competitive, but we still navigated through the year and came through at the end,” said Ward, who was elected as the 2019-20 A-10 Coach of the Year. “We have great depth and that showed in all 18 swimmers scoring points in the championship.”

Senior Attila Kiss won a silver medal in the 800-yard freestyle relay and a bronze in the 500 freestyle.

“There were really two reasons to why we won,” said Donnelly. “Fantastic coaches who worked really hard to get us here, and the teammates and the team culture we had were the biggest parts of why we got to the championship and won it.”

Ward has instilled a Bill Belichick-esque type mantra for his team: “Do Your Job.” Ward praised Donnelly as a leader that emulated that approach.

“Ryan Donnelly is a great example of what our program is,” Ward said. “He became a team leader, coaches can count on his consistency, he’s a Provost Scholar and he’s at the pool 20 hours a week on top of school.”

“Personally, I saw a need to win as a team player,” Donnelly added. “I’ve learned a lot about who I am, I’ve wanted to put others before myself, and in doing that our team’s relationships will last forever.”

Donnelly continually pointed out how well the team performs. “The team is stronger now than four years ago, we have wanted to drive team success, built on our team culture, and we just have a fun group that pulls for each other,” he said.

All 18 swimmers that competed in the A-10 Championship earned points, which contributed to Mason coming away with the victory.

“It really shows the depth of the program,” said Ward. “We have top-end kids that are highly competitive in the A-10.”

Ward is proud of his accomplishments, including being elected Coach of the Year in the A-10 last year, and the still-fresh 2020 Atlantic-10 Championship, but he is already moving on to next year and is focusing on recruiting for the 2020-21 Swim and Dive season.

“This year meant everything to me. I started this program and to have it persevere long enough to get to this point is special,” said Ward. “George Mason University means the world to me. It’s a rare thing to start a D-I program from scratch. I have a sense of ownership because of all of the alumni that have swam for me and what they’ve earned.”