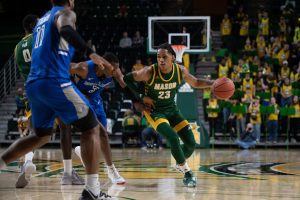 Mason scored six points during the first 15 minutes of the second half, allowing Saint Louis to take a 16 point lead despite trailing 29-28 at halftime.

A furious 14-2 run by Mason late in the game cut the deficit to as few as four points, but Saint Louis held on in the final two minutes by making six free throws and slamming home two wide-open dunks.

“The start of the second half was really disappointing,” head coach Dave Paulsen said. “We came out and turned the ball over a number of times … We dug too big of a hole for ourselves.

Saint Louis completed a 20-3 run, which spanned over 12 minutes during the second half.

At the end of that run, the 6:54 mark, Mason starting forward AJ Wilson fouled out of the game. Subsequently, Paulsen received a technical foul for arguing the merit of Wilson’s fifth foul.

“I think AJ Wilson got a tough whistle,” Paulsen said. “And it’s going to be hard to beat one of the upper echelon teams in the league with him playing 14 minutes.” 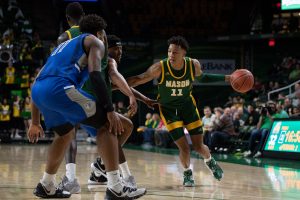 This moment may have sparked a last-ditch effort for Mason to get back into the game. Mason guards Javon Greene and Jamal Hartwell II spearheaded a comeback effort, scoring 10 of Mason’s next 14 points.

However, the team’s lack of ability to score when required was the final nail in the coffin as the team only scored two field goals in the final two and a half minutes of the game.

“Every game is an experience for our guys. But we just have to be able to channel that four-minute spurt that was good in the first half and be able to extend it for 40 minutes,” Paulsen said. “Part of that is depth, part of that is the physicality, wearing on Xavier [Johnson] … Josh [Oduro] is a freshman … When we can, and when we do, we can be pretty good.”

Mason had opportunities to soften the blow of Saint Louis’ big second-half run but failed to take advantage of their chances. In the second half, Mason scored just four points off of Saint Louis’ seven turnovers.

After posting an 11-2 record in nonconference play, this loss puts Mason squarely at .500 with a 15-15 overall record.

Mason will travel up to New York on Saturday, March 7, to play last-place Fordham on the final day of the Atlantic 10 regular season.

Mason is now 4-13 in conference play. The team is unable to earn a bye for the A-10 tournament and will start their title chase next Wednesday at the Barclays Center in Brooklyn, N.Y.

With a win and a La Salle loss, Mason will be the No. 11 seed in the A-10 tournament. Any other result of those two games leaves Mason with the No. 12 seed.

Letter to the Editor: Perspectives on Well-Being