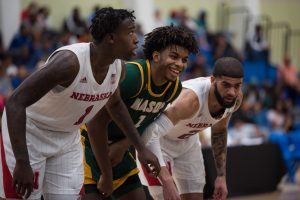 Ever since Justin Kier started playing basketball around the age of 9, he wanted to be the best. However, his road to Division I basketball was a long and arduous one.

When Kier was 7, his mother, Keley Kier, suffered a heart attack causing her to crash while driving him to a family cookout. As a result, she suffered severe brain damage causing paralysis, blindness and the inability to speak. Justin was raised by his grandmother then after.

Kier went to Spotswood High School and before he had graduated, he had signed a D-I scholarship, the first male athlete from the Harrisonburg area in more than 25 years to do so.

“It’s crazy because I know people are really close friends who’ve gone D-I just not in basketball,” Kier said. “So, it’s just — it’s really a blessing. I didn’t go to college just to stop playing right after, like I want to continue to play as long as I can. I want to make an impact on my community. I just want to do the best that I can at this sport and give it everything I have until the gas runs out.”

Kier made his official visit and then made his decision to come to Mason in 2016.

“I loved the guys and love to see them do better every day and go through ups and downs so like that’s part of why I came here,” Kier said.

Kier has performed on an elite level and has been one of head coach Dave Paulsen’s best players over the last two years. The Virginia native has always wanted to be number one on the team — the reason he wears his number.

“Ever since I was little, I just felt like everything that I did was to try to be the best,” Kier said. “And as you see in anything competitive you watch, in sports or even in anything in school, your goal is to be in that number one spot.” 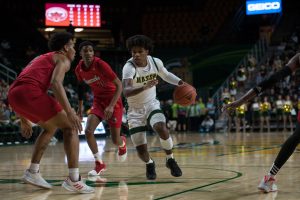 He has been injured for most of the 2019-20 season, only playing nine out of 28 games and scoring 86 points. Regardless, Kier has stepped up as leader for the Patriots during his time on the bench.

“I saw a change from the standpoint of I think he knew that he should step up, but over time he really has embraced his role on this team, he wants to do it, and he loves doing it,” assistant coach Duane Simpkins. “This season it was just more consistent, it wasn’t just during the last part of practice.”

He continued, “It’s also when Coach [Paulsen] is explaining something to him, he wants to understand it better and comes over to me saying like ‘Does he really mean to do this and this?’ or ‘Hey should we look at possibly this or this.’ So he’s stepped up and been utilizing this role a lot more and in practice and he’s doing it a lot more in games now.”

Simpkins also mentioned Kier’s character and how he impacts the team, saying, “One of our pillars is humility. We define it [as] not thinking less of yourself but thinking of yourself less. And he’s grown a tremendous amount in that area in terms of when some adversity comes his way doesn’t turn inward, he uses humility and thinks about other guys more.”

While Kier’s mother is not able to come to any of his games, he makes sure that she is always with him. Kier always writes the phrase “K. Kier” on his shoes or athletic tape for his mother.

“This season I put it in a more unnoticeable spot because I didn’t want that to be something that people like — that’s something that is very private for me. So I’ve put it on my shoes, but I’d have it in places where it wouldn’t necessarily be seen all the time. What’s important is that I know it’s there and I know she’s there and that’s all that matters to me,” Kier said.

While Kier’s mother cannot speak to him about all of his accomplishments over his four years at Mason, he believes that she would talk about how proud she is of him.

“I think she’d just be so proud of how I grew up,” he said. “Obviously, before she had her accident, I was just this kid. She and I were always together — I was literally like her sidekick. Kind of like how Kobe was with his daughter and we were literally always together. Wherever she was, I was and I would always be having fun or just kidding around, or getting on her nerves, whatever it was, I was never really serious. So I think if she saw me, she’d see how mature I have been since that accident, I think she would just be really proud of me.”