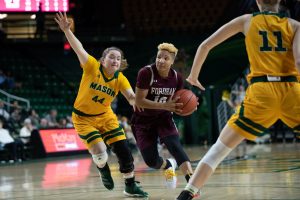 As the month of March begins, so too does one of the most exciting times of the year: college basketball tournament play. Mason will be traveling to Saint Louis to take on the Billikens at 8 p.m. on Tuesday, March 3.

Mason lost to Saint Louis at home 64-51 and was plagued by inconsistency throughout the game. After trailing by double digits in the first half, the Patriots pulled within two at halftime. The team’s defense then allowed 14 straight points to open the third quarter.

This has been the story of the season and the storyline will need to be rewritten if the team wants to go from Saint Louis to Dayton for the last three rounds of the tournament.

At Saint Louis Nicole Cardaño-Hillary will try to become the team’s all-time leading scorer, needing just 10 points to achieve the milestone. However, she cannot be the only scorer as the Patriots have struggled when she has been the only primary scorer.

The team should look to both the younger and older players on their roster. Jacy Bolton has struggled to score at times this season, but has been a critical player for Mason throughout her four years.

Marika Korpinen has scored in the double figures eight times this season, a career-high for her. If she can get going from behind the arc, this team has a chance of upsetting Fordham and moving on to Dayton.

The freshmen Jordan Wakefield and Tamia Lawhorne have both contributed at key points this season and will need to play some of their best basketball to help the team avenge its earlier loss to Fordham.

Shifting gears to the rest of the field, Dayton has the top seed in the conference for the third time in four years. The team is searching for their second conference title in that time.

The Flyers are looking for their 11th consecutive postseason tournament berth.

In five of the last six tournaments, one of the top three seeds has won. The lone exception was George Washington winning the tournament as a five seed in 2018.

The other top three seeds are VCU and Fordham. While each team has had their struggles and triumphs this season, these three teams are certainly the favorites.

Both VCU and Fordham played in the title game last year, but that will not be the case this year based on the bracket.

VCU was the pre-season favorite, however, the team struggled in the nonconference season and had two unexpected upsets in conference play. But the team’s stifling defense cannot be underestimated in the tournament.

Fordham is looking to replicate last season’s success, with another conference tournament title and NCAA Tournament appearance. The Rams have had success this season, but not as much as in previous seasons.

The team’s five conference losses are the most for the team since the 2016-2017 season, leaving them with something to prove. After a five-game winning streak in February, the Rams finished the regular season 2-2.

The first two rounds of the tournament will be televised on ESPN+, the semifinals will be on CBS Sports Network and the championship will be on ESPNU on March 8 at noon.