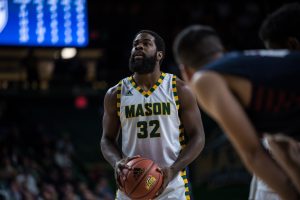 Men’s basketball senior guard Ian Boyd has been a standout player for the program over the last four years. However, it might surprise fans to know that he almost played a different college sport altogether.

The dual-sport threat was also an incredible basketball player, scoring over 2,000 points during his time at Apex.

However, when it came to decision time, Boyd ultimately chose to pursue basketball.

“I just felt like I could work every day with [basketball] and actually still love it. I love doing the work that I put in,” Boyd said.

Now focused on basketball at Mason, that drive to work hard has not dissipated.

The 6-foot-4-inch guard led the team in bench minutes during his freshman season, playing 19 minutes per game. The following year, he played in all 33 games and averaged 24.8 minutes per game.

Over his career at Mason, Boyd has played in 95 games, averaging 6.3 points per game and 3.0 rebounds per game. Boyd set his career-high for points in a game of 18 on Nov. 22, 2017, against Fresno State. Two weeks later, he recorded career-highs in assists (six) and steals (four) on the road against Auburn.

Boyd has had a plethora of impressive moments during his time at Mason, but perhaps none of them can top the end of conference play during the 2017-18 season.

It’s hard enough to hit one game-winning shot in basketball. You have to be in the right place, at the right time, and keep a cool head to execute under pressure.

But Boyd didn’t just hit one buzzer-beater that year. He made three. In back-to-back-to-back games.

Dubbed “Mr. SportsCenter” by his teammates, Boyd made a three-point shot at Saint Joseph’s, a layup vs. UMass and a tip-in at VCU, winning the game for the Patriots each time.

When reflecting on that three-game stretch, Boyd said, “To be honest… I just wanted to win [the games]. When it did happen, I was just as surprised as anybody else.

There is one aspect to this story that fans might forget: Boyd didn’t start in any of the games in which he hit the game-winning shot.

“One of the things that we try to instill in our program is that it doesn’t matter who starts, it matters who finishes,” Paulsen said. “Well, you can’t hit three straight buzzer beaters if you’re not on the floor. He didn’t start any of those games, but he was a guy we wanted on the floor at the end.”

Despite a tweet from SportsCenter of his three-point shot against St. Joseph’s going viral, accumulating over 3,700 retweets and 13,900 likes, Boyd said that his favorite buzzer-beater was the tip-in against VCU.

“We beat them, at VCU, and on their senior night,” Boyd reasoned.

Coach Paulsen, however, was a little noncommittal.

“When you win on the road, it’s even more impressive. So it’ll be one of those two [against Saint Joseph’s or VCU]. But we needed that win against UMass as well. So I think they’re all great.”

After the game against VCU, in which he scored his third-straight game-winning shot, Boyd was interviewed on SportsCenter by anchor John Buccigross.

“It was late at night, we just got back off the bus, and then they said I had an interview with SportsCenter,” Boyd said.

What was Boyd’s initial reaction to hearing those words? He chuckled before saying, “I’ve gotta talk.”

Boyd has always been a soft-spoken person. But when around his teammates, he does not mind being social and somebody that other players can talk to when they need help. 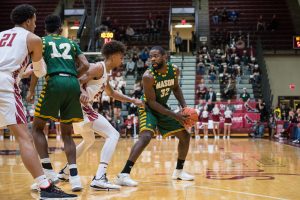 Even during this season, in which a wrist injury has sidelined him for the entire season, he still provides a high level of support to his teammates.

“His absence … this whole season has been a big, big blow for our team,” Paulsen said. “But he’s really tried to provide just a lot of energy and leadership and support.”

He later added, “Dealing with adversity, dealing with frustration, [there are] days when he’s not necessarily smiling in his dorm room, I would guess, but he’s smiling out here. Sometimes in life, you get dealt an unfair hand. You’ve got to fake a smile and persevere, and I think he’s done that.”

While coach Paulsen was talking, Boyd was helping his teammates warm up before a practice. Paulsen pointed to that as a prime example of Boyd’s passion, energy and love for the team.

“You see him out there right now shooting, he’s smiling, and he’s laughing with his guys. He’s just a loyal teammate,” Paulsen said. “He’s a favorite of every guy on this staff, every guy on the team. He’s matured as a student in incredible ways. He’s grown up as a person as much as anyone I’ve ever coached.”

Boyd retains one more year of basketball eligibility due to his injury, but he will still be celebrated on Senior Night on March 4 against Saint Louis.

When Boyd’s time as a Patriot ends, whenever that may be, he said that he hopes people remember him as a person who could always smile and light up a room. That smile remains a constant, even during this season when he has fought through injury and adversity.

If you look at the 2019-20 men’s basketball roster page, nobody, including the players and coaches, has a bigger grin on their face than Ian Boyd.