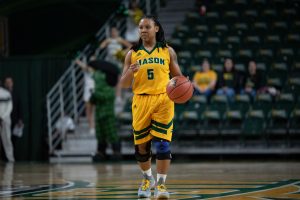 Giving Everything on the Court

Alexsis Grate has always played basketball, but she got her start in an unconventional way in the early 2000s: She played on an all-boys team from the time she was 6 until she was in seventh grade.

In middle school, Grate joined her school’s girl’s team, but chose to play with boys before that because the girl’s teams were just starting out.

She believes playing with boys helped her develop her skills and that she was able to become a tougher player against boys that were stronger and faster. However, Grate has always been quick.

Growing up, Grate loved watching Candace Parker while she was at the University of Tennessee. She was particularly drawn to the fact Parker was able to dunk, as that was incredibly uncommon at the time. She also loved how aggressive Parker was when she played, something Grate would emulate later on.

Both of her parents influenced her because they both played basketball and exposed her to it early.

When she was in high school, Grate’s dad would help her get better outside of her high school practices.

“We would always go to the gym on Sundays and get shots up before the week would start. Just like, especially in-season so I was always in rhythm, like, I never fell off in my shot,” she said.

Grate, a Hampton native, wanted to be close to home, but not too close, and found Mason to be a perfect fit. As a criminology, law and society major, Washington D.C. also offers her a lot of future career options.

She’s currently in the application process for the Fairfax County Police Department and is looking to attend the Academy in July, something her head coach Nyla Milleson is very proud of.

“I’m really proud of her on and off of the floor. School was not necessarily always easy for her, and school certainly wasn’t one of her favorite things, but, you know, she had an end goal. She’s going to reach that and, you know, maybe even quicker than she thought she was going to,” Milleson said. 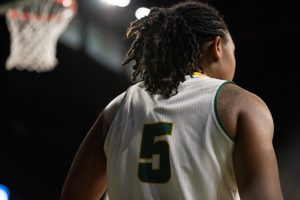 Milleson added that when Grate realized all that she could accomplish, “She just put her nose to the grindstone and, you know, things haven’t always been easy for Lex but she’s just stayed in. And I think I’ve used on several of them, you know, the word ‘persevere’ and [she] just stayed at it.”

During her time at Mason, Grate has contributed in every way she has been asked to despite battling injuries along the way. Unfortunately, that is something that has continued into her senior year.

Grate hopes to be remembered by how she does things that may fly under the radar. “My hustle plays, playing good defense and [being] relentless,” she said. “I just hope people remember me for the little things that I did. I didn’t really have a big role as much on the offensive side, but I think that my defense was pretty good over the last couple of years.”

In addition to her growth off the court, Milleson believes that Grate has been able to grow on the court as well.

“On the floor, she’s just not ever had a healthy offseason, to really probably grow like she would have liked to have. But I think from her calmness and her composure and her ability to be able to find places where she can score — I think she’s really grown since [she’s been] a freshman,” Milleson said.

Her favorite memory from her time at Mason was when the team beat Dayton, one of the top teams in the conference, last season.

She continued, “I was on the floor and I was having a really good game. I think I had like 12 or 13 points in the game. And I was like, we’re about to do this, we got this, and then Nikki [Nicole Cardaño-Hillary] hit that shot and it was like, ‘Oh man!’ It was so surreal to me.”

According to Grate, her teammates believe in her more than she believes in herself. “I may take about five shots a game, but they really believe in me and it gives me more confidence because like I know, I’m a pass-first guard, but I know that on any given night if I had to, if the roles are switched, I could do it. And I have,” she said.

She hopes that she has passed that mentality onto her teammates. “I think I’m a pretty selfless person, so I hope that they have learned that it’s not all about themselves and to get everyone involved, because like that’s what I do,” she said.

Grate continued, “I don’t think about myself. I’m always thinking about what can I do to get someone else the next shot, what can I do so that she gets a shot. So I hope that’s rubbed off on the younger players, especially Livy [Livija Kaktaite], Jordan [Wakefield] and Tamia [Lawhorne].”

Milleson spoke highly of Grate. “I think Lex is one of our toughest competitors,” she said. “You know she hates to lose … She’s given us everything she has … She just, she competes every day that she’s able to. She tries to make her teammates better around her. And I think that has been really good for us.”

While basketball has taught Grate one lesson in particular, it can be applied off the court as well: “Never underestimate anyone, because even the smallest player can do so much damage to any one on any team. Never underestimating anyone and respecting all of my opponents.”